The Organic Foods Production Act of 1990 (OFPA) is a law that regulates the production, processing, handling, packaging, and labeling of organic agricultural products in the United States. The OFPA establishes clear, national standards for organic agriculture and aids consumers by requiring simpler, standardized labeling of organic products. It also protects consumers and legitimate organic producers by setting fines and punishments for producers and marketers that make false or misleading claims about organic agricultural products.

Prior to the passage of the Organic Foods Production Act (OFPA), the United States did not have a uniform standard for certifying or labeling organic foods. Organic agriculture in the United States originated in the 1970s as a small group of consumers began demanding organic produce and meat. Without any regulation over what foods could be labeled organic, unscrupulous growers and retailers began selling non-organic goods as organic products. In 1973 Oregon passed the nation's first organic certification law. Other states followed during the 1970s and 1980s.

The U.S. Congress responded by including the OFPA in the Food, Agriculture, Conservation, and Trade Act (FACT) of 1990, a five-year omnibus farm bill that addresses agriculture and other issues under the purview of the U.S. Department of Agriculture (USDA). OFPA establishes national standards for the production, handling, and labeling of organic food in the United States. The Act allows states to maintain organic certification programs that are stricter than the federal standard with the approval of the USDA, but states may not discriminate against products that qualify under the federal organic standard.

To advise the USDA on standards for the National Organic Program (NOP), the OFPA established the National Organic Standards Board (NOSB), a program to establish and oversee organic certification standards. The NOSB consulted the public and industry representatives in developing organic certification standards for the NOP. In April 1995 the NOSB adopted a definition of “organic,” which states: “Organic agriculture is an ecological production management system that promotes and enhances biodiversity, biological cycles and soil biological activity. It is based on minimal use of off-farm inputs and on management practices that restore, maintain and enhance ecological harmony.” Generally, under the NOP, organic products may not contain synthetic pesticides or fertilizers.

ORGANIC AGRICULTURE: The production of food or fiber crops, livestock, or livestock-related products without the use of synthetic fertilizers, pesticides, or hormones.

THIRD-PARTY CERTIFICATION: A system in which an organization independent of all the companies in a supply chain certifies that a good reaches particular standards or has particular attributes. Most international organic standards, fair trade standards, humane animal treatment standards, and claims of being not genetically modified, as well as a variety of environmental claims are certified

Under the OFPA, a producer or marketer may not label a product “organic” unless it meets all of the organic production and handling standards set forth by the NOP. The NOP requires the following organic certification requirements: production methods and materials must meet organic standards; production methods and materials must be clearly documented; and producers and handlers must maintain a paper trail that allows a product to be traced back to its production site.

The organic certification standards promulgated by the USDA under the OFPA require that all producers of organic crops and livestock and all subsequent handlers be certified. A “handler” is defined as any operation that “receives, processes, packages, or stores agricultural products.” Exempted from the certification requirement are retailers, such as grocery stores, and small producers that engage in direct sales to consumers or retailers.

The NOSB definition of “organic” notes that organic agricultural practices cannot guarantee that all organic products will be free of synthetic fertilizers or pesticides, although NOP standards will attempt to “maintain the integrity of organic agricultural products.” Under the OFPA, growers seeking organic certification for the production of crops must grow crops on land that has not had any prohibited substance applied during the previous three years. Organic farmers must maintain buffer zones between land used in organic production and land used for the production of conventional crops. Buffer zones are intended to minimize airborne synthetic fertilizers, pesticides, or other substances from neighboring fields. 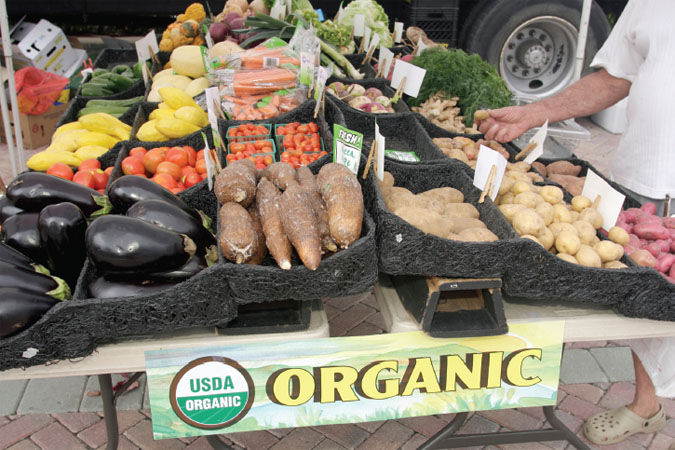 In addition, the USDA regulates livestock and related products, such as dairy products and eggs, under the OFPA. All organic livestock must be fed organic feed; use of growth hormones and the routine use of antibiotics in organic livestock are prohibited. Producers, however, may use synthetic vitamins and minerals on livestock. For organic meat, the OFPA processing requirements prohibit the use of nitrates, nitrites, or sulfites.

The Organic Foods Production Act of 1990 defines organic farming practices and creates minimum standards for certified organic production. It was established that the Act would be administered under the U.S. Department of Agriculture's Agricultural Marketing Service (AMS), which would create funding and a budget for administering the program.

It is the purpose of this title—

(2) to assure consumers that organically produced products meet a consistent standard; and

(3) to facilitate interstate commerce in fresh and processed food that is organically produced….

(1) have been produced and handled without the use of synthetic chemicals, except as otherwise provided in this title;

(2) except as otherwise provided in this title and excluding livestock, not be produced on land to which any prohibited substances, including synthetic chemicals, have been applied during the 3 years immediately preceding the harvest of the agricultural products; and

(3) be produced and handled in compliance with an organic plan agreed to by the producer and handler of such product and the certifying agent.

(A) a person may sell or label an agricultural product as organically produced only if such product is produced and handled in accordance with this title; and

(B) no person may affix a label to, or provide other market information concerning, an agricultural product if such label or information implies, directly or indirectly, that such product is produced and handled using organic methods, except in accordance with this title.

(b) IMPORTED PRODUCTS.-Imported agricultural products may be sold or labeled as organically produced if the Secretary determines that such products have been produced and handled under an organic certification program that provides safeguards and guidelines governing the production and handling of such products that are at least equivalent to the requirements of this title.

Bingen, Jim, and Lawrence Busch. Agricultural Standards: The Shape of the Global Food and Fiber System. Dordrecht, The Netherlands: Springer, 2006.