Dementia is a decline in a person’s ability to think, learn, and remember. Dementia itself is not a disease, but a set of symptoms. Dementia is characterized by memory loss, the inability to concentrate and make judgments, and the general loss of other intellectual abilities. Symptoms also include personality changes, mood swings, paranoia, and odd behavior. In order for a person to receive a diagnosis of dementia, these symptoms must be severe enough to interfere with daily functioning. Dementia usually occurs in elderly people, though it can also appear in younger adults.

Dementia can be caused by a number of conditions, some of which are reversible and some of which are not. The most common cause of irreversible dementia in people over the age of 65 is Alzheimer's disease. In this disease, clumps of a protein form in a patient's brain and interfere with its functioning. Alzheimer's progresses slowly, but after seven to 10 years many patients have lost the ability to speak or care for themselves. Alzheimer’s disease is marked first by forgetfulness, followed by memory loss and disorientation, then by severe memory loss, confusion, and delusions. There is no effective treatment or cure for the disease and its cause is unknown. 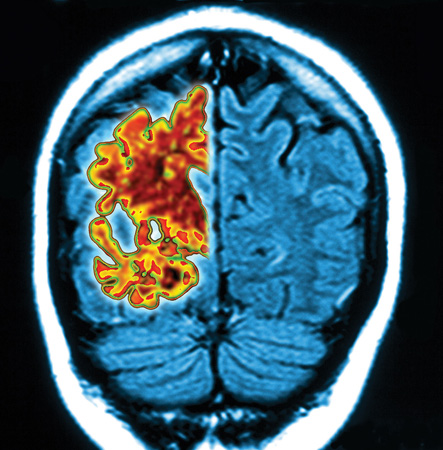 Some dementia is reversible. Dementia can be caused by infectious diseases such as meningitis, syphilis, or Lyme disease, by thyroid problems, hypoglycemia (low blood sugar), bleeding on the surface of the brain, poisoning, lack of oxygen, and nutritional deficiencies. Prescription drugs are a common cause of dementia, either single drugs or combinations of drugs interacting. Dementia caused by factors such as these can often disappear when the cause is removed.

Risk factors for dementia include age and family history. People with Down syndrome have a high risk of dementia. Other risk factors include alcohol use, atherosclerosis, high blood pressure, diabetes, obesity, smoking, and depression.

Dementia often causes severe problems both to the patient and his or her family and caretakers. Patients with dementia cannot care for themselves properly, so they need help with bathing and brushing their teeth. They cannot remember to take their medications and often forget to eat. They may sleep poorly. They may become angry and aggressive and unreasonable, making it a challenge to care for them. As dementia progresses, a patient may be unable to recognize dangerous situations, or forget to do things such as turning off the stove after cooking.

Treatment begins by assessing all possible causes of dementia, including medications prescribed for various conditions. If the dementia is caused by a reversible factor, eliminating the cause can cure it. If the dementia is irreversible, there are a few medications that can help memory functions. Occupational therapy might help a patient adjust. Otherwise, the only thing to do for dementia is to modify the environment so that the patient is safe and comfortable and is able to receive care.