Depression is an illness that causes feelings of sadness and loss of interest that last for many days. Depression is not just “the blues,” or a temporary feeling of sadness. A person cannot just “snap out” of a medical depression.

Antidepressant
A prescription drug used to treat depression.
Cognitive behavioral therapy
A type of psychotherapy that focuses on changing behavior by addressing specific thoughts and problems.
Hormone
A chemical produced by a cell or tissue that sends a message to another part of the body, directing it to act a certain way.
Mood disorder
A psychiatric illness in which disturbance in a person's mood is the main symptom.
Neurotransmitter
A chemical that transmits electrical impulses from one cell in the nervous system to another.

The symptoms of depression include a sad or depressed mood or a marked lack of interest and pleasure in almost all activities. This feeling persists for most of the day, nearly every day, for at least two weeks. In addition, many or all of the following symptoms occur: (1) loss of appetite; (2) fatigue (tiredness); (3) difficulty sleeping; (4) feelings of guilt or worthlessness; (5) lack of concentration; (6) thoughts of death, often including suicidal thoughts or plans, or even a suicide attempt. People with depression are also very likely to experience headaches, stomach aches, or pains or aches almost anywhere in their bodies. Depression affects twice as many women during their lifetimes as it does men.

No one knows the fundamental cause of major depression. Both physical and emotional factors appear to be involved. Possible causes include stressful events, childhood trauma, and biological changes. Some depression appears to be hereditary; up to 25 percent of those with depression have a relative with a mood disorder of some kind. Changes in hormones and neurotransmitters, chemicals that transmit information from one cell in the nervous system to another, might cause some cases of depression. Serious illness often brings on depression. Depression after childbirth is very common; this is called postpartum depression and might be related to sudden changes in hormone levels. 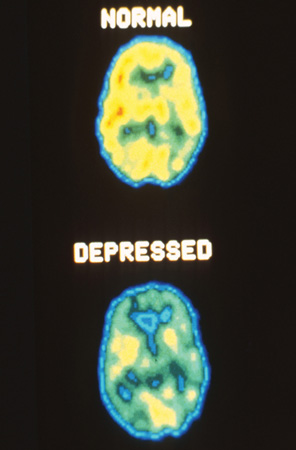 Medications known as antidepressants are often prescribed for depression. These medications raise the level of certain neurotransmitters in the body. Antidepressants include selective serotonin reuptake inhibitors (SSRIs) such as Zoloft and Prozac, and tricyclic antidepressants. Psychotherapy, used either alone or along with medication, can also be an effective treatment for depression. Psychotherapy, particularly cognitive behavioral therapy, allows the psychiatrist to help a depressed person change his or her distorted views and beliefs about themselves and the world.

Both medication and psychotherapy typically take several weeks or months to become fully effective, and neither can help everyone. When treatment is ineffective, doctors may try different combinations of drugs with more side effects or medical treatments such as electroconvulsive therapy, in which electric shocks cause the patient to have seizures, or stimulation of nerves inside the brain.

Because there is no consensus on the effectiveness of antidepressants for the treatment of depression and some concern about the side effects of antidepressants, many people choose not to take these drugs and instead use alternative therapies. Other possible therapies include exercise, yoga, meditation, and acupuncture. In many cases, depression ends on its own without treatment.