Dyslexia is a learning disorder characterized by difficulty with reading and writing. Dyslexic people may skip words, reverse the order of letters in a word (writing or reading “was” for “saw”), or drop some letters from a word (reading “run” instead of “running”). They may invent strange spellings for common words, have difficulty remembering and following sequences such as the order of the alphabet, and have cramped, illegible handwriting. A person with dyslexia is born with the disorder and has it for life. 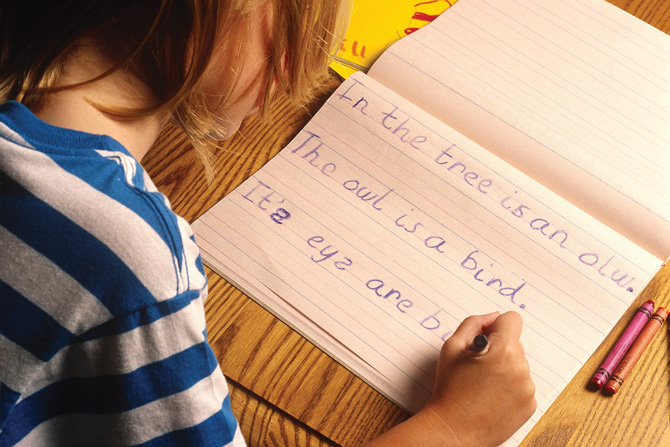 Dyslexia is not caused by poverty, psychological problems, lack of education, or laziness. People who are identified as dyslexic generally have normal or above-normal intelligence and normal eyesight and tend to come from average families. It is not unusual for a student with dyslexia to fail English while excelling in math. The disorder is fairly common, affecting between 5 and 10 percent of people in the United States.

Scientists generally agree that dyslexia results from a neurological problem in the areas of the brain involved in reading. Several regions of the brain—all located in the brain’s left side—have been identified as controlling the complicated task of reading and writing. What part of the reading task is processed in each area is not yet clear. Even more mysterious is how the brain translates abstract symbols like printed letters into ideas.

In normal reading, the eye sends pictures of abstract symbols to the brain. Each symbol is then transferred along different routes to various portions of the brain for interpretation. Scientists suspect that in a dyslexic person, something jams the transfer of that information.

Scientists generally agree that genetics plays a role in dyslexia. Studies of twins show that if one twin is dyslexic, the other is likely to have the disorder. Other studies show that the disorder tends to run in families. It is common for a child with dyslexia to have a parent or other close relative with the disorder.

Dyslexia is two to three more times common in males than in females. In 2013, researchers identified differences in brain anatomy in dyslexic men and women as compared to normal individuals, suggesting that the disorder might not function the same way in both sexes.

People with mild cases of dyslexia sometimes learn to compensate on their own. Early diagnosis and prompt treatment seem to be the keys to overcoming the challenges of dyslexia. Linguistic and reading specialists can help people with the disorder learn how to develop and apply reading and writing skills.

Many dyslexics reach remarkable levels of achievement. In 2010 researchers at Middlesex University in England suggested that a number of famous artists were dyslexic, based on studies of the way dyslexic people process three dimensional information. Their list included Italian artist, scientist, and engineer Leonardo da Vinci (1452–1519) and famous painter Pablo Picasso (1881–1973). Some people also believe that German-born American physicist Albert Einstein (1879–1955) was dyslexic.