Eating disorders are medical conditions that involve abnormal eating habits, such voluntary starvation, overeating, or purging after eating. The most common eating disorders are anorexia nervosa, bulimia nervosa, and binge eating disorder. Researchers are not sure what causes eating disorders, but family relationships, genetics, psychological factors, and distorted body image appear to be contributing factors. Patients are often desperate to lose weight and be thin.

Antidepressant
A prescription drug used to treat depression.
Binge
To eat a large amount of food rapidly in a single sitting.
Cognitive behavioral therapy
A type of psychotherapy that focuses on changing behavior by addressing specific thoughts and problems.
Laxative
A drug used to induce defecation.
Psychotherapy
Treatment by a professional intended to help with psychological problems and improve mental health and behavior.

Eating disorders usually appear in people in their teens or early twenties, though they can occur at any age. Eating disorders are more commonly diagnosed in females than in males, but boys and men do get them. They can be dangerous; anorexia in particular kills a large number of patients every year. Treatment can be effective, but as of 2014 there were still no consistent treatment protocols for many eating disorders, and many patients had to undergo more than one treatment session to be cured.

The word anorexia comes from the Greek adjective anorektos, which means “without appetite.” People with anorexia starve themselves out of fear of gaining weight, even when they are severely underweight. Some refuse to eat at all; others nibble only small portions of fruit and?vegetables or live on diet drinks. They may exercise strenuously to keep their weight abnormally low. No matter how much weight they?lose, they always worry about getting fat and typically cannot see how thin they are.

This self-imposed starvation takes a heavy toll on the body. The skin becomes dry and flaky. Muscles begin to waste away. Bones stop growing and may become brittle. The heart weakens. With no body fat for insulation, a person with anorexia has difficulty staying warm. Downy hair starts to grow on the face, back, and arms in response to lower body temperature. In women, menstruation stops and permanent infertility may result. Muscle cramps, dizziness, fatigue, even brain damage and kidney and heart failure are possible. An estimated 10 to 20 percent of people with anorexia die, either as a direct result of starvation or by suicide. 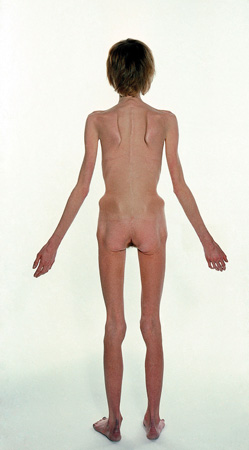 The obvious cure for anorexia is eating. But that is typically the last thing a person with anorexia wants to do. It is unusual for the person himself or herself to seek treatment. More commonly, a friend, family member, or teacher initiates the process. Hospitalization, combined with psychotherapy and family counseling, is often needed to control the condition. Force-feeding may be necessary if the person’s life is in danger. About 70 percent of anorexia patients who are treated for about six months return to normal body weight. About 15 to 20 percent can be expected to relapse and return to anorexic eating habits.

Bulimia nervosa gets its name from the Greek term boulimos, meaning “great hunger,” or, literally, “the hunger of an ox.” The condition is commonly known simply as bulimia. People with bulimia go on eating binges, often gorging on huge amounts of cakes, candy, or junk food and then forcing their bodies to get rid of the food, either by making themselves vomit or by taking large amounts of laxatives.

Like anorexia, bulimia results in starvation. But there are behavioral, physical, and psychological differences between the two conditions. Bulimia is much more difficult to detect because people who have the disorder tend to be of normal weight or may even be overweight and they hide their eating and purging habits.

Unlike anorexics, bulimics are aware that their eating patterns are abnormal, and they often feel remorse after a binge. They find that they are unable to control the amount they eat on a binge. Like anorexics, however, they are desperately afraid of gaining weight, which is why they then remove the food from their bodies.

The self-induced vomiting that often follows eating binges can cause all sorts of physical problems, such as damage to the stomach and esophagus, chronic heartburn, burst blood vessels in the eyes, throat irritation, and erosion of tooth enamel from the acid in vomit. Excessive use of laxatives can be hazardous, too. Muscle cramps, stomach pains, digestive problems, dehydration, and even poisoning may result. Over time, bulimia causes vitamin deficiencies and imbalances of critical body fluids, which in turn can lead to seizures and kidney failure.

Bulimia is not as likely as anorexia to reach life-threatening stages, so hospitalization usually is not necessary. Treatment generally involves psychotherapy and sometimes the use of antidepressant drugs. Unlike anorexics, bulimics usually admit they have a problem and want help overcoming it. Estimates of the rates of recovery from bulimia vary widely, with some studies showing low rates of improvement and others suggesting that treatment usually is effective. Even after apparently successful treatment, however, some bulimics relapse.

In order to be diagnosed with this disorder, people must engage in binges, in which they eat an amount of food that most people would not be able to consume in the same period of time. They feel a loss of control over their eating habits. They binge at least twice a week, and they worry about it.