Schizophrenia (pronounced skiht-zo-FREH-nee-uh) is a severe mental condition that interferes with normal thought processes, causing delusions, hallucinations, and mental disorganization. The National Institute of Mental Health (NIMH) describes schizophrenia as a “chronic, severe, and disabling brain disease.” NIMH estimates that approximately 1 percent of the U.S. population at some point suffers from schizophrenia, meaning that more than two million Americans are considered to be schizophrenic in any given year. Others estimate that as many as half the patients in U.S. mental hospitals are schizophrenics. Although it occurs in women as often as in men, it seems to appear earlier in men, usually in their late teens or early twenties.

Cognitive behavioral therapy
A type of psychotherapy that focuses on changing behavior by addressing specific thoughts and problems.
Delusion
An incorrect belief about reality that is clearly false, held despite evidence to the contrary.
Hallucination
A disruption in one's perception of reality, in which the senses perceive stimuli that do not actually exist.
Paranoia
Fear of threats and persecution not based in reality.

People with schizophrenia experience delusions—mistaken beliefs—and hallucinations—perceiving things that do not exist. Most schizophrenics hear voices that talk to them, either telling them to do certain acts or commenting on their daily experiences. They may also smell or see objects that are not there or feel the sensation of fingers touching their bodies. Delusions include the belief that others are trying to harm them or control their thoughts and the belief that others are sending them messages through television, computers, or other media. 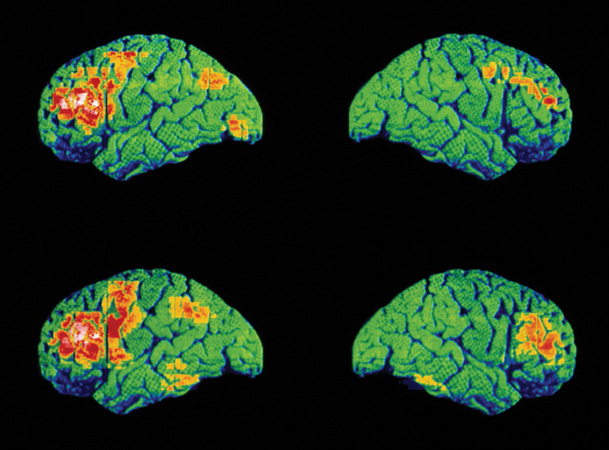 Schizophrenics typically suffer from disorganized thinking, which makes their conversations difficult to follow. Sometimes they repeat physical motions. Occasionally a schizophrenic patient becomes catatonic, a state in which he does not move or interact with anyone. Schizophrenics often act as if they are depressed, with a lack of facial expression and lack of interest in daily life.

Patients with untreated schizophrenia can become completely withdrawn from human society, unable to communicate with anyone. Even when treated, schizophrenia is a serious condition that can make it impossible for individuals with the disease to work or live a normal adult life.

For the most part, doctors do not know what causes schizophrenia. People with the condition often display differences in brain structure or brain chemistry, but why they have them is hard to say.

Schizophrenia appears to have both genetic and environmental causes. There is a definite genetic link; people with schizophrenic parents or twin siblings are much more likely to develop the condition than others. Environmental conditions such as an urban setting, social isolation, and family dysfunction increase the risk. Though parenting practices are not thought to cause schizophrenia, there may be some links with a mother's malnutrition or stress during pregnancy, older fathers, and viral exposure in utero.

Schizophrenics are somewhat prone to abuse drugs and alcohol, though substance abuse does not seem to cause schizophrenia. Marijuana seems to help some patients with their symptoms.

Since schizophrenia has no one known cause, the best medical science can do is to treat the symptoms. Before the 1950s, electroconvulsive treatment or shock therapy was the only known method of treatment. In the 1950s psychiatrists began prescribing drugs such as Thorazine and Haldol. In the 1990s, a new group of antipsychotic drugs were produced that were very effective in keeping delusions and hallucinations under control, though they continually require fine-tuning to prevent patients from losing all motivation and interest in life. Side effects include drowsiness, dizziness, and significant weight gain. Many schizophrenics resist treatment, partly out of delusional thinking and partly out of dislike for the effects of the drugs.

Treatment also includes therapy, such as cognitive behavioral therapy, to help patients distinguish valid thoughts from delusional ones, and group therapy, to give patients a supportive community of fellow sufferers. The families of schizophrenics often need support and counseling as well to help them deal with their relative's condition.

Although some experts argue that schizophrenia is a modern disease, many agree that there is sufficient historical evidence to suggest that it is as old as humans. Stories of so-called mad people whose behavior was beyond the limits or control of others and whose behavior was bizarre and unexplainable are found throughout ancient history in all cultures. Ancient Babylonian documents are said to contain such evidence, and nearly 2,500 years ago, Greek historian Herodotus (480–425 BC) described the mad king of Sparta. In the second century AD, Roman writer Celsus described three types of insanity, one of which sounds very much like schizophrenia. Many authorities believe that schizophrenia was described during the Middle Ages (the period in European history from about 500 to 1500), and by the sixteenth century there were published accounts of clearly schizophrenic cases called “mania” or “melancolia.”

The first modern description of symptoms now recognized as schizophrenia was given by German psychiatrist Emil Kraepelin (1856–1926) in 1896. In 1908, Eugen Bleuler (1857–1939), a colleague of Austrian psychoanalyst Sigmund Freud (1856–1939), came up with the name schizophrenia to describe what he said was some sort of split in the proper functioning of the brain. He used the word split because he said that a schizophrenic’s ideas are often isolated or separate from his feelings. (Schizophrenia does not actually involve split personalities or multiple personalities. Multiple personality disorder is no longer a recognized clinical diagnosis; psychiatrists now agree that people do not have split personalities, however disturbed their reasoning.)