Chemical energy is the energy stored within the bonds of atoms. A bond is the force that holds two atoms together. Different substances have bonds held together by different amounts of energy. When those bonds are released, a chemical reaction takes place, and a new substance is created. Chemical reactions that break these bonds and form new ones sometimes release the excess energy as heat and sometimes absorb heat energy from whatever is around them.

For example, when iron rusts, the iron atoms are combining with oxygen molecules in the air to form iron oxide. The chemical reaction of rusting breaks the bonds in the oxygen molecules, releasing heat energy. The bonds between the oxygen atoms and the iron atoms do not require as much heat energy as the bonds within the oxygen molecules, so a small amount of energy is released, making the reaction exothermic. The amount of heat released is quite small, and the reaction is normally quite slow, so rusting iron does not feel hot to us. Yet, the energy released can be measured with a thermometer. In the first experiment, you will observe the change in temperature resulting from rusting. 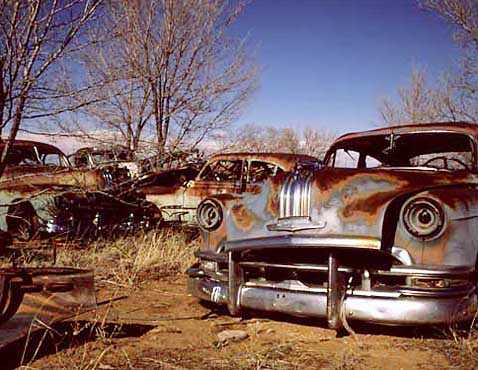 Some exothermic reactions are quite common. One is combustion, the burning of organic substances during which oxygen is used to form carbon dioxide and water vapor. The substances formed (ashes, for example) hold less heat energy than the substances burned held. The excess energy is released as heat. The reactions between some chemicals, such as aluminum oxide and iron oxide, can produce great amounts of heat. This reaction is used to produce very high temperatures for industrial purposes. 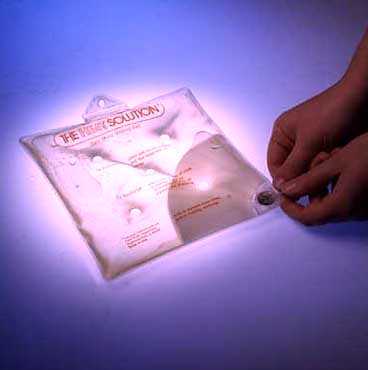 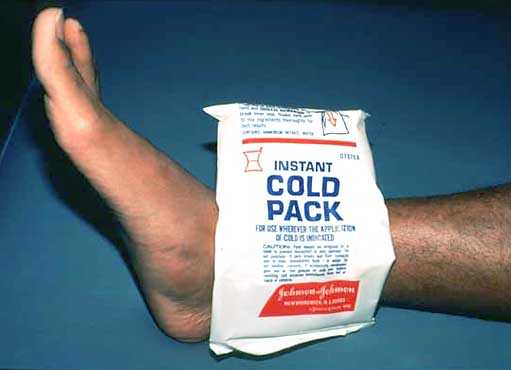 Endothermic reactions are more rare in nature, but scientists have found ways to create them. For example, an endothermic reaction occurs when you use a chemical cold pack. These packs contain a chemical in powder form that reacts with water. Squeezing the pack breaks down the wall separating the powder from the water. The reaction that occurs absorbs more energy than it releases, making the pack feel cold to you. In the second experiment, you will compare four chemical reactions and determine whether each one is exothermic or endothermic.

Atom
The smallest unit of an element, made up of protons and neutrons in a central nucleus surrounded by moving electrons.
Bond
The force that holds two atoms together.
Chemical energy
Energy stored in chemical bonds.
Chemical reaction
Any chemical change in which at least one new substance is formed.
Combustion
Any chemical reaction in which heat, and usually light, is produced. It is commonly the burning of organic substances during which oxygen from the air is used to form carbon dioxide and water vapor.
Control experiment
A set-up that is identical to the experiment but is not affected by the variable that will be changed during the experiment.
Endothermic
A chemical reaction that takes in heat energy.
Exothermic
A chemical reaction that gives off heat energy.
Heat
A form of energy produced by the motion of molecules that make up a substance.
Hypothesis
An idea in the form of a statement that can be tested by observation and/or experiment.
Molecule
The smallest particle of a substance that retains all the properties of the substance and is composed of one or more atoms.
Product
A compound that is formed as a result of a chemical reaction.
Reactant
A compound present at the beginning of a chemical reaction.
Variable
Something that can affect the results of an experiment.

Rusting: Is the chemical reaction exothermic, endothermic, or neither?

In this experiment, you will measure the heat energy released or absorbed by the chemical reaction of rusting, the transformation of iron and atmospheric oxygen into iron oxide. Before you begin, make an educated guess about the outcome of this experiment based on your knowledge of rusting. This educated guess, or prediction, is your hypothesis. A hypothesis should explain these things:

A hypothesis should be brief, specific, and measurable. It must be something you can test through observation. Your experiment will prove or disprove whether your hypothesis is correct. Here is one possible hypothesis for this experiment: "A rise in air temperature will show that rusting is an exothermic reaction."

As a control experiment, you will leave one cup empty and monitor any change in temperature there. If the temperature is higher in the cup with more pads and does not change in the empty cup, your hypothesis will be supported.

In other words, the variables in this experiment are everything that might affect the temperature in the cup. If you change more than one variable, you will not be able to tell which variable had the most effect on the temperature.

$10. (If four thermometers are unavailable, the four parts of this experiment can be performed separately with one thermometer.)

Wear protective gloves when handling the steel wool and vinegar. 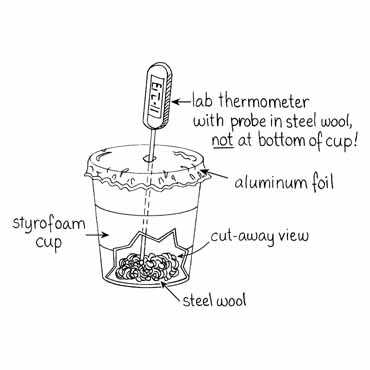 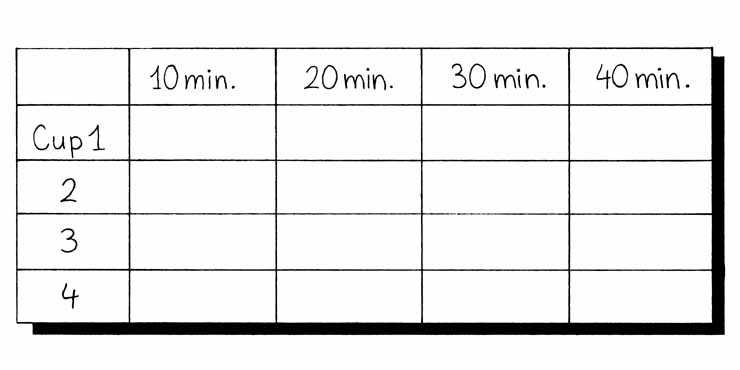 Examine your results and determine whether your hypothesis is correct. Did the temperature rise higher when more wool pads were in the cup? Did it rise in the empty cup? If the reactions resulted in an increase in temperature, then rusting is indeed exothermic. Make sure that your chart shows clearly the result of the tests on each sample.

Few problems should arise if the steps in this experiment are followed closely. However, when doing experiments involving the mixing of substances, be aware that a number of variables--such as temperature and impurity of substances--can affect your results. Here is a problem that may arise, a possible cause, and a way to remedy the problem.

Problem: You observed little or no temperature change in the cups.

Possible cause: The steel wool is not rusting. Try soaking it in vinegar again for several minutes to remove any protective layers and then repeat the experiment.

You can vary this experiment. Here are some possibilities:

In this experiment, you will measure the heat energy released or absorbed as four different chemicals (see the materials list) are mixed with water. You expect that the temperature of the solution will go up if the reaction is exothermic and go down if the reaction is endothermic. Before you begin, make an educated guess about the outcome of each reaction based on your knowledge of the chemicals and reactions involved. This educated guess, or prediction, is your hypothesis. A hypothesis should explain these things:

A hypothesis should be brief, specific, and measurable. It must be something you can test through observation. Your experiment will prove or disprove whether your hypothesis is correct. Here is one possible hypothesis for one of the reactions in this experiment: "Mixing water with calcium chloride will produce an exothermic reaction."

As a control experiment, you will measure the temperature in a beaker of distilled water with no chemical in it. If the temperature changes in the beakers with chemicals as predicted and remains steady in the control beaker, you will know your hypothesis is supported.

In other words, the variables in this experiment are everything that might affect the temperature of the solutions. If you change more than one variable, you will not be able to tell which variable had the most effect on the temperature.

Moderate; an adult's supervision is required.

$25. (This experiment should be performed only with the appropriate lab equipment and materials. Ask your teacher about ordering the chemicals.)

This experiment involves dangerous and toxic substances. No part of this experiment should be performed without adult supervision. You must be especially careful handling the sulfuric acid, which is highly corrosive. Wear gloves and safety glasses or goggles at all times! When you are finished with the experiment, the chemicals used must be disposed of properly and with supervision. Ask your teacher for help in handling, neutralizing, and disposing of the sulfuric acid. 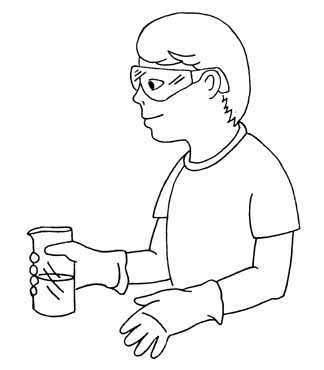 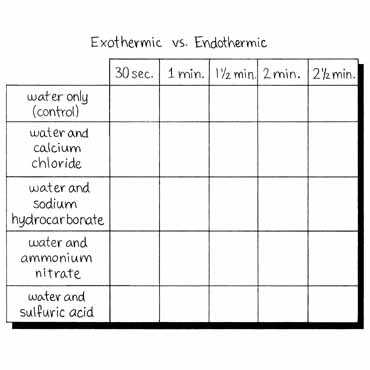 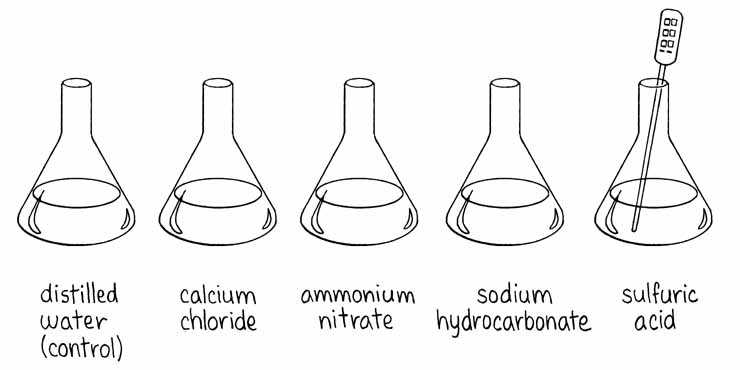 Examine your results and determine whether each of your hypotheses is correct. If any reactions resulted in an increase in temperature, those reactions are exothermic. If any reactions resulted in a decrease in temperature, they are endothermic. Make sure that your chart shows clearly the result of the tests on each set of reactants. It may be helpful to those viewing your results to see a diagram outlining the procedure you followed.

Here is a problem that may arise, a possible cause, and a way to remedy the problem.

Problem: You observed little or no temperature change in the beakers.

You can vary this experiment by trying reactions involving different household materials or chemical compounds. Do not mix them with anything other than water. Always check first with your teacher before altering the materials used in your experiments.

Design Your Own Experiment

How to Select a Topic Relating to this Concept

Other kinds of experiments can reveal interesting facts about endothermic and exothermic reactions. Our bodies produce exothermic reactions when we turn food into energy. Can you measure the amount of food energy available in a sample by burning it and measuring the resulting temperature change in a sample of water? Review the description of how cold packs work. Can you think of a way to design a homemade cold pack?

Check the Further Readings section and talk with your science teacher or school or community media specialist to start gathering information on chemical reaction questions that interest you.

Steps in the Scientific Method

To do an original experiment, you need to plan carefully and think things through. Otherwise, you might not be sure what question you are answering, what you are or should be measuring, or what your findings prove or disprove.

Here are the steps in designing an experiment:

Recording Data and Summarizing the Results

In the experiments included here and in any experiments you develop, strive to display your data in accurate and interesting ways. Remember that those who view your results may not have seen the experiment performed, so you must present the information you have gathered as clearly as possible. Including photographs or illustrations of the steps in the experiment is a good way to show a viewer how you got from your hypothesis to your conclusion.

Chemical energy is a basic and crucial part of life processes as well as technological processes. Projects that determine the energy produced by different fuels and compare the by-products of those fuels can help to demonstrate the necessity for developing alternative energy sources. Examining different reactions and determining their endothermic or exothermic rate can help us understand where so much of the energy we use goes.