Informed consent refers to the concept wherein a medical patient or participant in a clinical research trial gives his or her permission for the medical treatment or trial to continue after receiving all of the information necessary for the individual to make a reasoned decision. The informed consent requirement in clinical research trials and therapeutic treatment is intended to preserve the autonomy of the individual and to protect the health of the individual by enabling the subject of the clinical trial to make informed decisions about treatment or participation.

The modern concept of informed consent for medical patients and human participants in medical research traces its roots to ethical principles for human experimentation espoused in the Nuremberg Code. After World War II (1939–1945), a U.S. military tribunal conducted a trial of Nazi medical professionals alleged to have participated in horrific medical experiments on humans and mass murder. The tribunal convicted 16 of the 23 defendants, but the tribunal's decision also contained a 10-point statement of ethical principles for medical professionals engaged in human experimentation, which became known as the Nuremberg Code.

The Nuremberg Code states that the “voluntary consent of the human subject is absolutely essential.” The consent envisioned by the Nuremberg Code requires that the subject have the capacity to consent free of duress, coercion, or other influences. The participant must also have knowledge and comprehension about the purpose of the experiment, the manner in which the experiment will be conducted, and all risks and benefits involved. The medical professional who initiates or engages in the experiment must ensure that proper consent is obtained before proceeding.

Most medical associations around the world require researchers and physicians to obtain the informed consent of clinical trial participants or patients before beginning the trial or undertaking a course of treatment. The Belmont Report, issued in 1978, is a set of ethical rules for medical researchers codified in U.S. law. It also requires researchers to obtain the informed consent of individuals participating in medical research. The Belmont Report's analysis of informed consent requires that the medical professional provides information, that the patient understands the information, and that the patient consents voluntarily.

Physicians and researchers face a number of ethical issues related to obtaining the informed consent of patients in a therapeutic setting or participants in a clinical trial. Common ethical issues include communication barriers, the influence of religious beliefs of the patient/participant, and dealing with minors or patients with diminished capacity. In each instance, the physician or researchers should take the time and effort to ensure that the patient/participant or proxy understands all procedures, alternatives, and the risks and benefits involved in the treatment or trial. 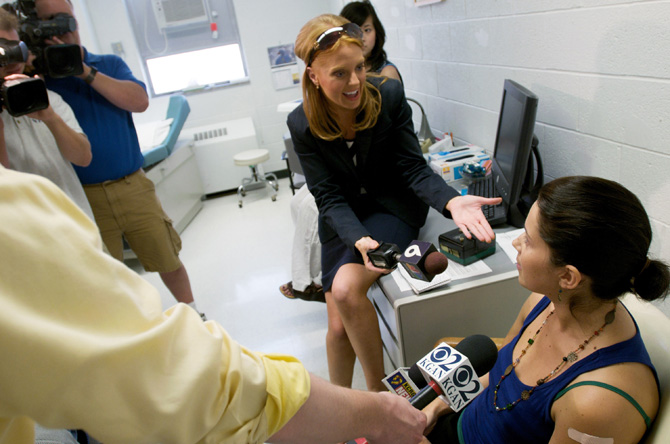 Whereas physicians and researchers typically receive signed informed consent forms from patients or participants, the receipt of a signed form does not ensure that the patient or participant completely understands all facets of the therapy or study. Studies involving participants in clinical trials have revealed that many participants do not realize the parameters of the trial and misinterpret the risks and benefits. One study showed that more than two-thirds of clinical trial participants did not understand the meaning of randomization within the trial. Language barriers also pose a major impediment to obtaining valid informed consent, particularly within the therapeutic setting. Patients who cannot understand a medical professional due to language barriers or an ineffective translation are less likely to adhere to a treatment regimen and are more likely to have complications as an outpatient.

Unique ethical considerations arise when physicians or researchers work with minors or adults with diminished capacity. Neither minors nor adults with diminished capacity are capable of giving informed consent. In most jurisdictions, minors are presumed to be incompetent to give consent. In some nations, weighing the minor's age and maturity with the type of procedure involved may be used to rebut the presumption of incompetence. In other jurisdictions, the presumption of incompetence may not be rebutted. Parental consent is required for informed consent in almost all situations involving minors. In most jurisdictions, adults are presumed competent to consent. This presumption may be rebutted by evidence of an organic mental or psychiatric disorder that renders the patient or participant incompetent. In cases of incompetence, informed consent from the patient/participant or his or her family is generally not sought. Instead, the physician or researcher must act in the best interest of the patient or participant.

The most serious ethical issues involving informed consent arise in situations in which the patient or participant is supplied with insufficient information to allow for him or her to give a reasoned decision. In 1996, Pfizer, an American pharmaceutical company, conducted a clinical trial of safety and efficacy of trovafloxacin, an antibiotic, on children in Nigeria's Kano state. Pfizer conducted the clinical trial without obtaining informed consent from the parents of the children that participated in the clinical trial. According to court documents and media reports, few of the parents spoke English, and they were not informed about the experimental Pfizer treatment, the side effects of trovaloxacin in animal studies, or the fact that Médecins Sans Frontières (Doctors without Borders) was offering free, conventional treatment at the same facility. Eleven children died and others suffered permanent disabilities. In 2009, Pfizer, the parents of the children, and the government of Nigeria reached a settlement after more than seven years of litigation. 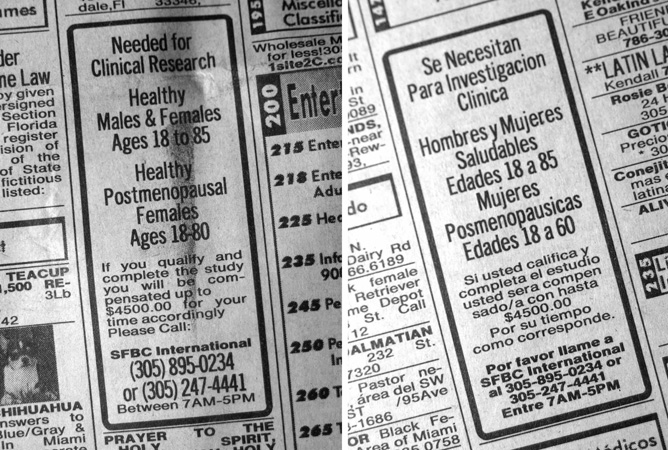 In this report, the authors discuss the question of experiments, specifically experiments conducted by the U.S. government. Concerns about informed consent, or lack thereof, are detailed. Reports allege that between 40 to 80 years ago, medical experiments were conducted on prisoners and on mentally or physically ill patients. Bioethics and ethical concerns surround reports of studies performed that involved hurting people by deliberately infecting them with various strains of virus or bacteria, or by performing other actions as to cause illness. Rationale, intentionality, and lack of transparency about the experiments are of grave concern. Discussion follows about what did or did not take place between the federal government, researchers, and human subjects.

“At best,” Stobbe writes, “these were a search for lifesaving treatments; at worst, some amounted to curiosity-satisfying experiments that hurt people but provided no useful results.”

Stobbe began researching this article in October, after the U.S. government revealed its researchers gave syphilis to hundreds of Guatemalan prisoners in the 1940s. The U.S. government issued a formal apology and prompted a meeting of the President’s bioethics commission.

The NewsHour talked to Stobbe about his article. (Answers have been edited for space and clarity).

NEWSHOUR: What did you find in your research for this article?

MIKE STOBBE, ASSOCIATED PRESS REPORTER: There have been dozens of studies that the federal government has either conducted or paid for that involved the deliberate infection of test subjects. It was interesting how common it was.

There were some very noted researchers who were involved in studies that involved infecting mental patients or prisoners, including Jonas Salk, who’s famous for inventing the polio vaccine. In an attempt to see if an experimental flu vaccine worked, in 1942 he and his colleagues worked at a state insane asylum in Michigan exposing male patients to the flu. Some of these patients had vaccines, some of them didn’t.

And Joseph Goldberger, a public health hero. He’s the one that figured out that pellagra, a terrible disease that affected the south, was actually due to diet, poor diet. His study didn’t involve infecting people, because it was not a virus or bacteria causing the illness. But he did a study where they changed the diets of federal prisoners, and gave them this terrible, painful condition.

NEWSHOUR: How did you go about finding out about these experiments?

STOBBE: When the government apologized in October for the Guatemala experiment, one of the federal officials was asked, “How often has this happened before?” And he mentioned that there had been about 40 studies that they were aware of in the published literature—in medical journals, not things the general public would read. Forty seemed like a lot to me, so I pressed for citations, more information about which studies they were talking about.

Then me and my colleagues, two news researchers, dug them out—dug them out of old journals, went back to old press clippings to see what was known about them when they happened.

NEWSHOUR: Did these patients provide consent?

In one study in Brooklyn in the early 1960s, they were volunteers but they didn’t know they were being injected with cancer cells. No one ever told them that. What seems to have happened, in a lot of studies, they were told, you know—would you like to participate in this study? We’re looking for at a treatment, sometimes they’d say what they were looking at, a vaccine or a treatment against “X.” But they wouldn’t necessarily tell them, here’s what we’re going to do to you. And these are the risks that you’re facing.

I interviewed one prisoner who’d been at a prison in Philadelphia in the 1960s. He went through some terrible studies, that were initially described to him—one of them was described to him as a test for a new type of bubble bath. He went through excruciating pain. They removed a layer of skin from his back and put on very painful chemicals. Not what you’d expect for a test for bubble bath. They didn’t always understand what they were getting into.

NEWSHOUR: How did the public not know this was going on?

STOBBE: I can’t say why some things weren’t written about, in general, you have to recall the 1940s and the 1950s, this was an era when some of these diseases that are under control today weren’t under control then. We were just getting syphilis under control. Antibiotics and some of these other drugs were just becoming available. A lot of these diseases were things that killed people regularly. There was much more of an attitude at the time, you know, the existing diseases is a terrible situation. And anything we can do to fix it seems, you know, largely justified.

They didn’t always get into the details of what was being done to achieve that goal. That’s a big part of it. As one source told me, it’s not that they didn’t have ethics at the time—it’s that they had different ethics.

NEWSHOUR: And did the civil rights movement have any impact on these experiments?

NEWSHOUR: Are there any experiments like this being conducted today either in the U.S., or overseas by U.S. companies?

STOBBE: In terms of studies that intentionally infect people with illnesses, the people I interviewed said they don’t think that’s happening. That’s something that’s come and gone, even overseas. What's at issue now is that there are more studies being done overseas that involve new treatments or even existing treatments. It's sort of a Tuskeegee-like concern. In the Tuskeegee study, they watched men who had syphilis deteriorate through the decades, even though there were good medicines that could have helped them and saved them. They didn’t treat them. That’s a concern that’s been raised about some international studies. There are some drugs that have been proven effective here in the United States—there are studies being done in other countries, for example, in Africa. Some patients are getting that proven treatment, and some aren't.

And then the question is, well, how could you let some people suffer when you know there’s a good treatment available?