Working conditions in factories—the circumstances under which individuals are required to do their jobs—include such factors as the number of hours on the job, required output for workers, safety in the workplace, and compensation paid to workers and their families for injuries and fatalities suffered in the workplace.

Throughout most of the nineteenth century, U.S. manufacturers paid little heed to worker safety. Because workers, for the most part, lacked the means to obtain fair compensation for their injuries, accidents were ultimately cheaper than slowdowns in production. This changed toward the end of the century as the growth of the labor movement began to draw public attention to the plight of the worker. Pressure from social activists and damaging exposés by muckraking journalists led to the passage of state and federal laws in the early twentieth century that required manufacturers to take measures to meet safety standards.

In the nineteenth century factories in the United States were considerably more dangerous than those in Europe. This was due largely to the development of the American System of Manufactures, a method of mass producing goods that involved a semiskilled labor force operating large machines that were often poorly maintained. U.S. industries were subjected to minimal government regulation, and most courts denied worker injury claims if employers could demonstrate any degree of employee negligence. In the early part of the century, several groups attempted to improve working conditions. One such group, the “Lowell Mill Girls,” consisted of young women employed in the textile mills in the factory town of Lowell, Massachusetts. They went on strike in 1834 and again in 1836 to protest pay cuts and rent hikes in their nearby boarding houses. The Lowell Mill Girls were able to gain concessions in 1836, but conditions had once again worsened by 1837.

The movement to improve working conditions gained traction in the latter part of the century. In 1874 Massachusetts passed the first law limiting the number of hours that women and children could work. Three years later the state passed the Massachusetts Factory Act of 1877, which established an inspection system. Union membership increased dramatically toward the end of the century as workers sought a means to improve their immediate working conditions. Membership in the Knights of Labor, a national labor organization formed in Philadelphia, grew from 28,000 in 1880 to more than 500,000 in 1885 before declining rapidly by the end of the decade. Similarly, membership in the American Federation of Labor (AFL), a union for skilled workers that was established in 1886, grew to 256,000 in 1897. However, such efforts yielded little change. Between 1870 and 1900 the number of children in the workforce doubled. At the end of the century, the United States had the highest worker fatality rate in the industrialized world, yet employers were only paying for about half of those deaths, and the average settlement was approximately a half year's pay. To further compound matters, most factory employees earned very low wages, working between 10 and 12 hours per day six days a week. 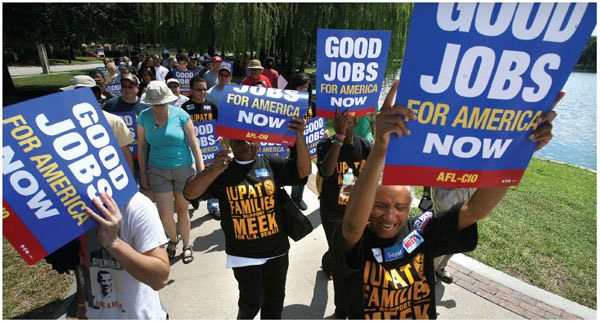 Members of the American Federation of Labor and Congress of Industrial Organizations (AFL-CIO), a federation of unions, march on Labor Day in 2010. JOE BURBANK/ORLANDO SENTINEL/MCT/GETTY IMAGES

During the Progressive Era (1900–17) social reformers and muckraking journalists publicized stories about dangerous working conditions in an effort to put pressure on factory owners. A journal called The Factory Inspector, distributed between 1902 and 1907, published reports of workplace accidents based on data gathered by state labor bureaus, and Chicago journalist William B. Hard wrote a 1907 article titled “Making Steel and Killing Men” in which he estimated that 1,200 men were killed or injured per year at U.S. Steel's Chicago-based South Works plant. The “Pittsburgh Survey,” a comprehensive sociological study conducted between 1907 and 1908, revealed that over a three-month period in 1907 more than 509 people were injured in industrial accidents. Of these, less than 40 percent received any payment beyond coverage of hospital bills. In response to these findings, U.S. Steel established a Central Committee on Safety and created an annual budget of $750,000 for safety improvements. In New York City a reform movement grew in the aftermath of a fire that killed 146 workers at the Triangle Waist Company on March 25, 1911. Following the tragedy, the state legislature created the New York Factory Investigating Commission, which inspected nearly 3,500 workplaces throughout the state over a two-year period and produced a 7,000-page report. The commission's efforts culminated in a complete overhaul of New York's health and safety codes. A year before the investigation, New York passed the country's first workers' compensation law; 44 other states had followed suit by 1920.

These new laws prompted manufacturers to take steps to prevent accidents in the workplace. In 1913 companies established the National Safety Council to develop a set of practices that minimized injuries and promoted the development of safer machines. As a result, the number of accidents decreased steadily until the start of World War II (1939–45), when a massive increase in production caused the rate of workplace injuries to rise. Injury rates declined again in the postwar years until another spike in production in the 1960s again resulted in a corresponding increase in injuries. This led, in 1970, to the formation of the Occupational Safety and Health

The “Pittsburgh Survey,” a comprehensive sociological study conducted between 1907 and 1908, revealed that over a three-month period in 1907 more than 509 people were injured in industrial accidents. Of these, less than 40 percent received any payment beyond coverage of hospital bills.

Administration (OSHA), a government agency created to establish and enforce standards of worker safety. Through the remainder of the twentieth century and into the twenty-first century, worker injuries and fatalities in the United States remained low. Analysts have attributed this decline to the maintenance of acceptable safety standards in the U.S. workplace as well as to a shift from manufacturing to retail.

Fishback, Price V., and Shawn Everett Kantor. A Prelude to the Welfare State: The Origins of Workers' Compensation. Chicago: U of Chicago P, 2000. Print.