Soil is a complex mixture of weathered rock debris and partially decayed organic (plant and animal) matter. Soil not only supports a huge number of organisms on and below its surface—bacteria, fungi, worms, insects, and small mammals—but it is essential to all life on the planet. Soil provides a medium in which plants can grow, supporting their roots and providing them with water, oxygen, and other nutrients for growth.

Bedrock
Solid layer of rock below Earth's surface.
Erosion
A process that moves soil from one place to another.
Fertilizer
A substance added to soil to encourage plant growth and to increase crop yields.
Horizon
A distinct layer of soil.
Microorganism
An organism so small it can only be seen with the aid of a microscope.
Organic
Containing the element carbon; coming from an organism that is or was alive.
Pesticide
A substance used to kill pests such as insects, fungi, or weeds.
Sediment
Small particles such as sand, silt, and clay that are transported by flowing water or wind.
Subsoil
The layer of soil below the topsoil.
Topsoil
The top layer of soil with large amounts of organic matter.
Weathering
The natural processes such as wind and running water that break down rocks on Earth's surface.

Evolution of Soil and Plants

Soil covers much of Earth in depths from a few inches to several feet. Soils began to form billions of years ago as rain washed minerals out of the molten rocks that were cooling on the planet's surface. The rains leached or dissolved potassium, calcium, and magnesium—minerals essential for plant growth—from the rocks onto the surface. This loose mineral matter or parent material was then scattered over Earth by wind, water, or glacial ice, creating the conditions in which very simple plants could evolve. Plant life eventually spread and flourished.

As these early plants died, they left behind organic residues. Animals, bacteria, and fungi fed on this organic matter, breaking it down further and enriching the parent material with nutrients and energy for more complex plant growth. Over time, more and more organic matter mixed with the parent material, a process that continues in modern times.

Soil is generally composed of 50 percent solid material and 50 percent space. About 90 percent of the solid portion of soil is composed of tiny bits of rock and minerals. These solid particles range in size from fine clay to mid-range silt to relatively large, coarse sand. The remaining 10 percent of soil is made up of organic matter—living plant roots and plant and animal remains, residue, or waste products.

The proportion of solid material in soil determines the amount of oxygen, water, and nutrients that will be available for plants. Since smaller particles stick together when wet, soil with a lot of clay holds water well, but drains poorly. Clay particles also pack together tightly, allowing for little air space. As a result, plant roots suffer from a lack of oxygen. Sand particles do not hold water or nutrients well. The best soil for plant growth is one in which all three types of material—clay, silt, and sand—are in balance. Such a soil is called loam. 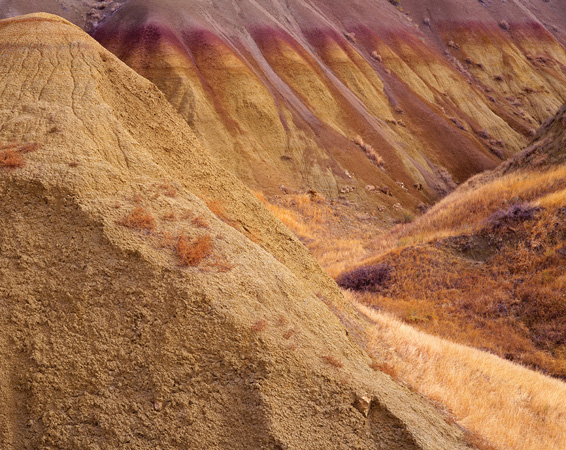 Once soil has developed, it is composed of horizontal layers with differing physical or chemical characteristics and varying thickness and color. These layers, called horizons, each represent a distinct soil that has built up over a long time. The layers together form the soil profile. Soil scientists have created many different designations for different types of soil horizons. The most basic soil layers are the A, B, and C horizons.

Below the A layer is the subsoil, the B horizon. This layer usually contains high levels of clay, minerals, and other inorganic compounds. Water forced down by gravity through the A horizon carries these particles into the B horizon. This process is called leaching.

The A and B horizons lie atop the C horizon, which is found far enough below the surface that it contains little organic matter. Fragmented rocks and small stones make up most of the C horizon. Beneath this horizon lies bedrock, the solid layer of rock that lies underneath all soil.

Life in the Soil

Soils teem with life. In fact, more creatures live below the surface of Earth than above. Among these soil dwellers are bacteria, fungi, and algae, which exist in vast numbers. Bacteria are the most abundant of these organisms. Three-hundredths of an ounce (one gram) of soil may contain from several hundred million to a few billion microorganisms. These microscopic organisms feed on plant and animal remains, breaking them down into humus, the dark, crumbly organic component of soil present in the A horizon. Humus cannot be broken down any further by microorganisms in the soil. It is a very important aspect of soil quality. Humus holds water like a sponge, serves as a reservoir for plant nutrients, and makes soil particles clump together, helping to aerate the soil.

Ants abound in soils. They create mazes of tunnels and construct mounds, mixing soils and bringing up subsurface soils in the process. They also gather vegetation into their mounds, which become rich in organic matter as a result. By burrowing and recolonizing, ants can eventually rework and fertilize the soil covering an entire prairie.

Earthworms burrow through soils, mixing organic material with minerals as they go and aerating the soil. Some earthworms pull leaves from the forest floor into their burrows (called middens), enriching the soil. Almost 4,000 worms can inhabit an acre of soil.

Among the larger animals that inhabit soils are moles, which tunnel just below the surface and eat earthworms, grubs, and plant roots. In doing so, they loosen the soil and make it more porous. Mice also burrow, as do ground squirrels, marmots, and prairie dogs. All bring tons of subsoil material to the surface. These animals all prefer dry areas, so the soils they unearth are often sandy and gravelly.

Erosion is any process that transports soil from one place to another. At naturally occurring rates, land typically loses about 1 inch (2.5 centimeters) of topsoil in 100 to 250 years. A tolerable rate of soil erosion is considered to be 48 to 80 pounds of soil per acre (55 to 90 kilograms per hectare) each year. Weathering processes that produce soil from rock can replace soil at this rate. However, cultivation, construction, and other human activities have increased the rate of soil erosion. Some parts of North America are losing as much as 18 tons of soil per acre (40 metric tons per hectare) per year.

The surface layer of soil (topsoil) provides most of the nutrients needed by plants. Because most erosion occurs on the surface of the soil, this vital layer is the most susceptible to being lost. The fertilizers and pesticides in some eroded soils may also pollute rivers and lakes. Eroded soil damages dams and culverts, fisheries, and reservoirs when it accumulates in those structures as sediment.