About the Author: Edward Davis Townsend (1817–1893) was born in Boston and graduated from the United States Military Academy at West Point in 1837. He fought Indians in Florida and assisted in the removal of Cherokee Indians to Oklahoma. Townsend transferred to the adjutant-general's department in 1846 and largely took over the affairs of the office under commander-in-chief Winfield Scott. He officially became adjutant-general on March 23, 1862, and was made a major-general for his services at the conclusion of the war. He retired in 1880 and died in 1893.

The first few years of the American Civil War went badly for the Union. From the first Confederate victory at Fort Sumter on April 12, 1861, Union forces had difficulty making progress on their objective to capture the Confederate capital of Richmond, Virginia. Confederate general Robert E. Lee's army was strong in his home state, leading to many costly and indecisive battles or Confederate success.

For President Abraham Lincoln, the failure to gain strategically significant territory made him and the war increasingly unpopular. Many in the North felt that the South was not necessarily worth fighting to keep, particularly given the philosophical gulf between the North and the South on the subject of slavery. Antiwar groups such as the Northern Democrats, known as the Copperheads, maintained the war was too costly, both financially and in the human cost, and Page 264  |  Top of Articlethey advocated peaceful resolutions that might or might not include the readmission of the Confederacy to the Union.

In the face of increasing opposition and the possibility of defeat at the hands of the South, Lincoln needed to invigorate the Northern war effort. One of the problems Lincoln faced was the shortage of troops. The Confederate army readily used slave labor, thereby increasing its numbers. Some slaves fought beside their masters out of loyalty to the South. However, many fought because they had no choice. For enslaved African Americans, the battlefield could potentially bring them closer to freedom, which was guaranteed if they crossed over to the Union line. Thus, the Union army protected freed slaves as its campaigns penetrated the South. Many of these men and women would perform labor in the Union army camps but not be trained or paid.

The Union army initially did not permit African Americans to join the military as regular soldiers. Although African Americans had fought on both sides of virtually every American conflict, including the American Revolution and the War of 1812, their participation was not as salaried soldiers. Instead, they were assigned menial tasks such as hauling water and digging trenches. However, like the handful of women who could be found on these battlefields, they would receive little credit or compensation for their service. In the case of the American Civil War, this was particularly frustrating for African Americans who were denied the right to fight to liberate their extended families enslaved in the South. Lincoln's reluctance to use African American troops came from his fear that the racism of the time would prevent some white troops from enlisting in an army that contained African Americans. However, as it became apparent that Lincoln needed to turn the tide of the war to save both the nation and his presidency, Lincoln opened the army to African American troops.

When War Department Order 143 was issued on May 22, 1863, African Americans were legally given full status in the army. The order established the Bureau of Colored Troops to manage the recruitment and organization of African Americans. Black soldiers 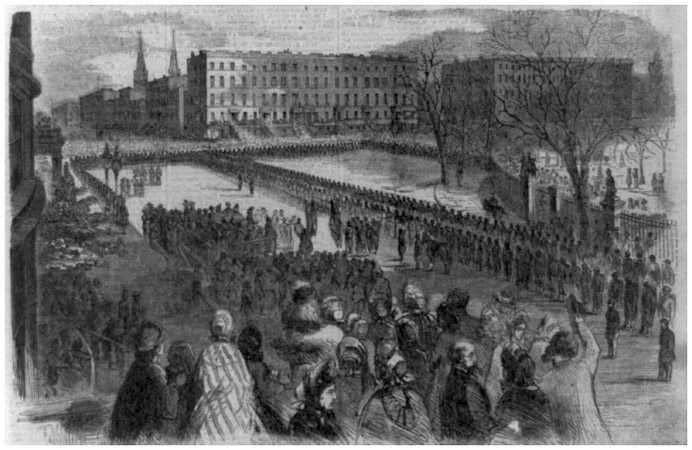 would not be integrated with the general fighting force but instead would be segregated into their own units.

Black soldiers were not new to the Union army. The Militia Act passed on July 17, 1862, had authorized the president to employ “persons of African descent” in military or naval service. Union generals had black regiments in Kansas, Louisiana, and the South Carolina Sea Islands by the summer of 1862. The first black combat casualties came in a skirmish in Missouri in October 1862. African Americans, however, had mostly been limited to non-combat roles.

The creation of the Bureau of Colored Troops opened the door to full-scale participation as combat forces. As Lincoln had hoped, the recruitment of black soldiers was a tremendous boost to the Union army. Ultimately, nearly 180,000 black troops fought for the Union, comprising 10 percent of the force.

Their contribution, while invaluable, did not save them from the prejudice that characterized the era. Black soldiers received less pay than white soldiers for the first two years of the Bureau of Colored Troops existence. In many cases, their white commanders continued to use them for manual labor rather than arming them and training them for combat.

A notable exception to this was the 54th Massachusetts Volunteer Infantry Regiment, whose history was portrayed in the Academy Award–winning film Glory (1989). The 54th Massachusetts would become one of the most decorated units in the Civil War after losing nearly half its men in an heroic assault on Fort Wagner in Charleston Harbor on July 18, 1863. Their bravery resulted in widespread admiration in the Northern press and in the army. Southern generals were less impressed with the inclusion of black soldiers in the Union army, and some threatened to execute any captured black soldier; this threat became real in 1864 when hundreds of surrendering black soldiers were massacred at Fort Pillow in Tennessee. 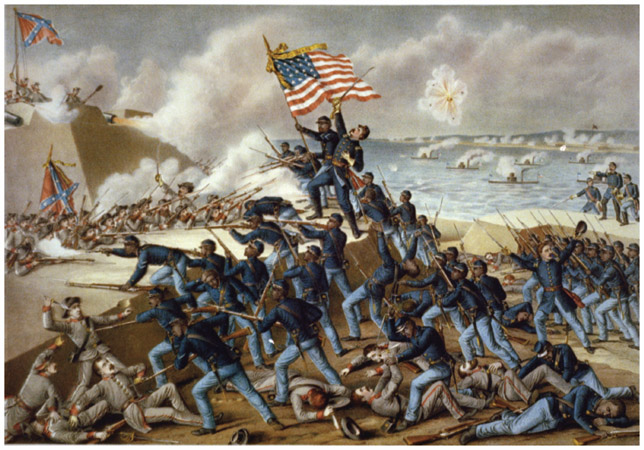 that preserved slavery. The majority of black soldiers were freed slaves, and Lincoln held a firm conviction that no soldier would be enslaved, saying, “I should be damned in eternity for so doing.” The admission of African American troops to the army was a small step on the long road to achieve the promise of equality inherent in the Northern assertion of the immorality of slavery.

SYNOPSIS: In typically brief military terms (only nine points are made), Edward Davis Townsend of the War Department discusses the admittance of “colored” troops into the army, with provisions for recruitment as well as promotion of noncommissioned officers.

I—A Bureau is established in the Adjutant General's Office for the record of all matters relating to the organization of Colored Troops. An officer will be assigned to the charge of the Bureau, with such number of clerks as may be designated by the Adjutant General.

II—Three or more field officers will be detailed as Inspectors to supervise the organization of colored troops at such points as may be indicated by the War Department in the Northern and Western States.

III—Boards will be convened at such posts as may be decided upon by the War Department to examine applicants for commissions to command colored troops, who, on application to the Adjutant General, may receive authority to present themselves to the board for examination.

IV—No persons shall be allowed to recruit for colored troops except specially authorized by the War Department; and no such authority will be given to persons who have not been examined and passed by a board; nor will such authority be given any one person to raise more than one regiment.

V—The reports of Boards will specify the grade of commission for which each candidate is fit, and authority to recruit will be given in accordance. Commissions will be issued from the Adjutant General's Office when the prescribed number of men is ready for muster into service.

VII—Recruiting stations and depots will be established by the Adjutant General as circumstances shall require, and officers will be detailed to muster and inspect the troops.