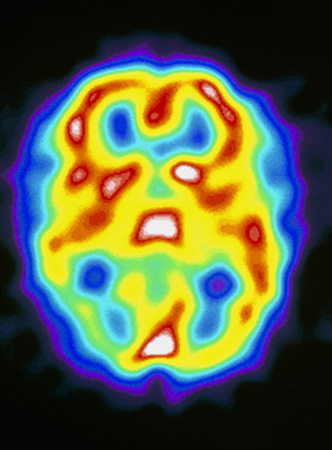 Radioactive tracers are substances containing radioactive atoms to allow easier detection and measurement. They have applications in many fields, but this article will focus on their use in medicine.

Radioactive tracers in medicine (also called radiopharmaceuticals) use the fact that specific tissues accumulate specific compounds. Labelling such a compound (i.e., compounding it using a radioactive isotope of one of its elements) and then putting it in the body causes it to accumulate in a specific tissue, yielding information on that tissue. For example, the thyroid gland removes iodine from the blood. When iodine-123 is injected into the blood, it collects in the thyroid like any other isotope of iodine. However, it emits gamma radiation that can be monitored to see how quickly the iodine is accumulating, which reveals if the gland is working at the normal rate. Many types of compounds can be radiolabelled, including salts, small organic compounds, and proteins, antibodies, or red blood cells.

Preparation and administration of radioactive tracers

Regular chemical reactions attach the radionuclide to the rest of the tracer molecule. Technetium-99m (99mTc) is commonly used. This emits gamma rays of optimal energy for detection, with no damaging beta particles. It has a short half-life (six hours) which leads to fast elimination from the body by decay. It can be generated when needed from a more stable isotope, molybdenum-99.

Tracers are introduced into the body by injection, orally, or by breathing gases. Some scans are obtained immediately after administration, but others are taken hours or even days later. Scans themselves usually take 30 minutes to three hours. Patients receive about the same dose of radiation from a radioactive tracer scan as from a chest x ray.

The process of obtaining an image from a radioactive tracer is called scintigraphy. Other imaging techniques (computerized tomography, CT; magnetic resonance imaging, MRI) give anatomical information. Scintigraphy gives information on the movement of compounds through tissues and vessels, and on metabolism. Earlier diagnosis is possible with scintigraphy because chemical changes often occur before structural ones. For example, a CT brain scan can be normal 48 hours after a stroke, but scintigraphy shows immediate changes.

The detector most commonly used with radioactive tracers is the Anger scintillation camera, invented by Hal Anger in the late 1950s. Gamma radiation causes crystals of sodium iodide to emit photons of light. This is called scintillation. This light is converted into electrical signals by photomultiplier tubes. The more photomultiplier tubes in the camera, the sharper the image. The electrical signals are electronically processed to give the final image, which is recorded permanently on a photographic plate. The Anger camera and the patient must remain stationary during imaging, which can take many minutes. To get high-quality images, the camera must be placed close to the body, which may be uncomfortable for the patient. The resulting image is planar, or two-dimensional. This is adequate for many applications, but tomography has broadened the scope of scintigraphy.

Tomography uses computer technology to convert numerous planar images into a three-dimensional slice through the object. This data processing is also used with CT and MRI. With radioactive tracers, it is called emission computed tomography, which includes single photon emission computed tomography (SPECT) and positron emission tomography (PET). Positrons result from a different type of radioactive decay which we will not discuss here.

SPECT images are usually obtained with Anger cameras which rotate around the patient. Numerous images are obtained at different angles. Faster and bigger computers give better image quality, while improved graphics capabilities allow three-dimensional imaging. These are helpful in precisely locating areas of concern within an organ, but are more expensive and take longer to obtain. Hence, both planar and SPECT images will continue to be obtained.

Radioactive tracers are widely used to diagnose heart problems. Narrowing of the coronary arteries leads to coronary artery disease which often manifests itself as angina. Radiopharmaceuticals allow visualization of the blood supply to the heart tissue. 99mTc-labels are used (e.g., sestamibi), but thallium-201 (201Tl) has advantages. After reaching the heart tissue, it moves from the blood into the heart cells. Healthy cells then eliminate about 30 percent of the peak level of 201Tl in about two hours. Damaged cells (e.g., from ischemia) will move the 201Tl more slowly. Thus, 201Tl gives information on both the health of the heart tissue itself and the blood flow to it.

Anger scintillation camera
A device used to detect gamma rays from radioactive tracers. It converts the energy from the radiation into light and then electrical signals which are eventually recorded on a photographic plate.
Isotopes
Two molecules in which the number of atoms and the types of atoms are identical, but their arrangement in space is different, resulting in different chemical and physical properties.
Monoclonal antibody
A protein that interacts with a foreign substance (antigen) in a specific way. They are monoclonal when they are produced by a group of genetically identical cells.
Radioactive tracer
A substance that is labeled with a radioactive isotope to allow easier detection and measurement.
Radionuclide
Radioactive or unstable nuclide.
Radiopharmaceuticals
Radioactive tracers with medical applications that are administered like other drugs.
Scintigraphy
The process of obtaining images of radioactive tracers using scintillation detectors.
Scintillation
A burst of light given off by special materials when bombarded by radiation.
Single photon emission computed tomography (SPECT)
The process by which gamma radiation from radionuclides that emit a single photon per decay is converted into three-dimensional images. It is a computer-based data processing method.
Tomography
A method of data processing by computers that converts numerous planar images of an object into three-dimensional images or slices through the object. It is used in many different scanning procedures.
Tracer principle
The general principle discovered by George de Hevesy in 1912 that isotopes of the same element have the same chemical properties. They act in the same way in chemical and biological reactions.

An exciting new area of use combines radioactive tracers with monoclonal antibodies (MoAbs). Antibodies are proteins that interact with a foreign substance (antigen) in a specific way. Advances in genetic technology allow biochemists to make MoAbs for many specific substances. Characteristic compounds on the surfaces of cancer cells can act as antigens. When radionuclide-labelled MoAbs are injected into the body, they attach to cancer cells with the corresponding antigen. The cancer cells can then be imaged, revealing their location and size. Three-dimensional imaging gives much guidance for subsequent surgery. Radionuclides can also be attached which emit cell-destroying radiation and thus kill cancer cells predominantly. Radiolabelled MoAbs promise to have more applications in the near future.