Radionuclides are powerful tools for diagnosing medical disorders for three reasons. First, many chemical elements tend to concentrate in one part of the body or another. For example, nearly all of the iodine that humans consume in their diets goes to the thyroid gland where it is used to produce hormones that control the rate at which the body functions.

Third, any radioactive material spontaneously decays, breaking down into some other form with the emission of radiation. That radiation can be detected by simple, well-known means. When radioactive iodine enters the body, for example, its progress through the body can be followed with a Geiger counter or some other detection instrument. Such instruments pick up the radiation given off by the radionuclide and make a sound, cause a light to flash, or record the radiation in some other way.

If a physician suspects that a patient may have a disease of the thyroid gland, that patient may be given a solution to drink that contains radioactive iodine. The radioactive iodine passes through the body and into the thyroid gland. Its presence in the gland can be detected by means of a special device. The physician knows what the behavior of a normal thyroid gland is from previous studies; the behavior of this particular patient’s thyroid gland can then be compared to that of a normal gland. The test therefore allows the physician to determine whether the patient’s thyroid is functioning normally.

For very detailed diagnosis, doctors can use positron emission tomography, or PET scans. In this procedure, a patient is injected with a tracer radionuclide and then placed in a CT (CAT) scanner, an X-ray machine that takes multiple cross-sectional images of the patient. The tracer nuclide will be visible in the patient's tissue, indicating the presence of cancer or other diseases. 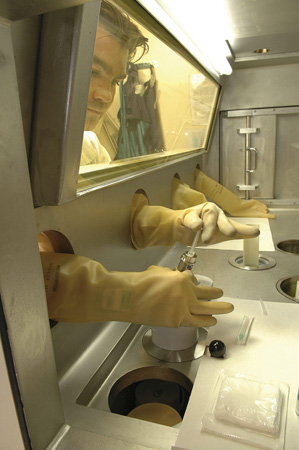 Radionuclides can also be used to treat medical disorders because of the radiation they emit. Radiation has a tendency to kill cells. Under many circumstances, that tendency can be a dangerous side effect: anyone exposed to high levels of radiation may become ill and can even die. But the cell-killing potential of radiation also has its advantages. A major difference between cancer cells and normal cells, for example, is that the former grow much more rapidly than the latter. For this reason, radiation can be used to destroy the cells responsible for a patient’s cancer.

A radionuclide frequently used for this purpose is cobalt-60. It is used as follows. A patient with cancer lies on a bed surrounded by a large machine that contains a sample of cobalt-60. The machine is then rotated in such a way around the patient’s body that the radiation released by the sample is focused directly on the cancer. That radiation kills cancer cells and, to a lesser extent, some healthy cells too. If the treatment is successful, the cancer may be destroyed, producing only modest harm to the patient’s healthy cells. That “modest harm” may occur in the form of nausea, vomiting, loss of hair, and other symptoms of radiation sickness that accompany radiation treatment.

Radioactive isotopes can be used in other ways for the treatment of medical disorders. For example, suppose that a patient has a tumor on his or her thyroid. One way of treating that tumor might be to give the patient a dose of radioactive iodine. In this case, the purpose of the iodine is not to diagnose a disorder, but to treat it. When the iodine travels to the thyroid, the radiation it gives off may attack the tumor cells present there, killing those cells and thereby destroying the patient’s tumor.