VOTING. The defining act of American democracy, voting is as complicated as its history. Colonial American governments imported property tests for SUFFRAGE from England, but the requirement that one own land or personal property worth forty or fifty pounds or land that would rent for forty or more shillings a year was much less restrictive in sparsely populated America than in Britain. Almost any white male who lived in the colonies long enough could accumulate that much property, and historians estimate that between 50 and 97 percent of the white male colonists could vote. Apparently, even these property tests were rarely enforced, especially in close elections. By 1800, property qualifications had been weakened or a taxpaying qualification substituted in all but three states. Noisy battles over universal white male suffrage in New York in 1821 and Rhode Island in the 1830s and 1840s were not typical struggles, but last, doomed efforts by opponents of white male equality. In 1860, only four states retained taxpaying or other minor requirements, while the rest had adopted virtually universal white native male suffrage. In addition, several states allowed free African American men to vote, and from 1777 to 1807, New Jersey enfranchised propertied women.

Then as now, not all those who were eligible voted. Although few early election returns survive, from 1730 on turnouts in various colonies ranged from 10 to 45 percent of the free adult males, with close contests stimulating more campaigning and voting than races dominated by one candidate or party. Turnout slumped during the turmoil of the Revolution, when pro-English Tories were often disfranchised; rebounded during the 1780s and 1790s, especially in states where Federalists and ANTIFEDERALISTS or Jeffersonian Republicans were both well organized; and fell off again as the FEDERALIST PARTY collapsed after 1812. Presidential election turnout rose to 55 percent of those eligible to vote with the election of Andrew Jackson in 1828, reached 78 percent in the election of 1840, and continued above 60 percent until 1912, peaking at 83 percent in 1876.

Votes do not always count equally. At first, state legislators, not voters, usually chose members of the ELECTORAL COLLEGE, who then chose the president. Elite controlPage 356  |  Top of Article soon eroded, and by 1828 political parties ensured that the winner of a plurality of the vote in a state would get all or nearly all of the state's electoral votes. Ironically, democracy reduced the value of the votes for losing presidential candidates in a state to nothing. Likewise, before 1842, some states elected members of Congress on the "general ticket" system, instead of by districts, allowing voters from one party to elect every congressman in a state. Other states drew noncontiguous districts or tidier districts with wide population disparities. Not until 1872 were congressional districts required to be contiguous and nearly equal in population; these mandates were never strictly enforced and were completely abandoned after 1911. Before the Civil War, under the Constitution slaves counted for three-fifths as much as free people in congressional and electoral college apportionment, enhancing the power of the slaveholding South. Since 1788, every state, no matter how large or small, has been entitled to two members in the U.S. Senate, giving a resident of Wyoming in 2000, for instance, 69 times as much representation in the Senate as a resident of California.

After the Civil War, more African Americans sought the vote, and abolitionist Republicans granted it. Congress first secured voting rights to blacks in the federally controlled District of Columbia, then, in 1867, in ten states of the former Confederacy, and finally, through the Fifteenth Amendment in 1870, in the nation as a whole. Since black suffrage had lost in twelve of fifteen referenda in northern states from 1846 through 1869, the Republicans' actions might have seemed foolhardy. But the passage of the Fifteenth Amendment robbed northern Democrats of an issue—the imaginary horrors of black suffrage, and it gave southern blacks a weapon with which to defend themselves—by voting Republican. As a further shield, Congress in 1870–1871 passed enforcement and supervisory acts to guard black voters against violence, intimidation, and corrupt or unequal balloting practices. Unfortunately, the Supreme Court emasculated these laws in 1876 in UNITED STATES V. REESE and UNITED STATES
V. CRUIKSHANK.

The "white terror" that ended RECONSTRUCTION in the South in the mid-1870s did not immediately terminate African American voting. A majority of black males continued to vote in the South in the 1880s and in some states until 1900. African Americans were elected to Congress until 1901 and to southern state legislatures until 1907. It was legal, not extra-legal methods, that first constrained black political power, and then largely eliminated it. Gerrymandering, the substitution of at-large for district elections, and the establishment of partisan election boards facilitated fraud and elected racist Democratic state legislators. The new legislators then passed registration, POLL TAX, and secret ballot laws, which diminished voting by the poor and illiterate, white as well as black, Republicans, and Populists. These restrictions on the electorate, as well as continued ballot-box stuffing, allowed Democrats after 1890 to pass literacy and property tests for suffrage 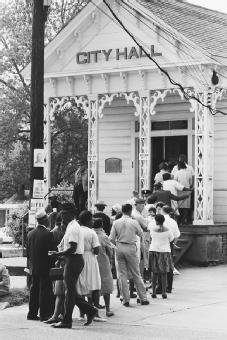 in constitutional conventions or referenda. Biased administration of these and other regulations of voting, such as the all-white Democratic primary, disfranchised nearly all southern blacks and many poor whites until the 1940s and 1950s.

Because women were less predictably Republican than were former slaves, who owed their legal status to the party of Lincoln, and because adding another radical reform might have nullified the opportunity for any change whatsoever, Republicans rejected the bid by the fledgling women's rights movement to add a ban on gender discrimination to that on race in the Fifteenth Amendment. It took women fifty years, innumerable local and state campaigns, and ideological shifts by the suffragists away from racial and antiliquor crusades before they secured the vote nationally with the ratification of the Nineteenth Amendment in 1920. Continued discrimination against women by male political leaders, as well as such barriers as the poll tax in the South, which disproportionately diminishedPage 357  |  Top of Article women's votes, curtailed electoral opportunities for women until a third wave of feminism in the 1970s. By the 1990s, women turned out to vote at higher rates than men, and female elected officials had become commonplace.

While the fact is seldom emphasized, European (though not Asian) immigrants to America obtained the right to vote with some controversy, but little real difficulty, despite the fact that many from the mid-nineteenth century on differed in language and religion from the dominant English-speaking Protestants. Politics in nineteenth-century America was a white male melting pot—a limited achievement, to be sure, but one that other countries' histories might make us appreciate.

Although the NEW DEAL revived voter enthusiasm, along with active government, political power remained unequally distributed. One response was the Supreme Court's decisions in such malapportionment cases as BAKER V. CARR (1962) and Reynolds v. Sims (1964), which ended the practice of having one election district with up to 422 times as many people as another in the same state. In 1965, Congress passed the Voting Rights Act, which reenfranchised blacks in the Deep South and gave courts and the U.S. Department of Justice the tools necessary to ensure that electoral rules were not biased against ethnic minorities. A third reform, the National Voter Registration Act of 1993, sought to increase levels of participation, especially among the young and the poor, by allowing people to register to vote by mail and in government offices, including departments of motor vehicles, and regulating purges of voter rolls. Still, in the 2000 presidential election, only 55 percent of adult American citizens voted, one of the lowest percentages in a national election of any developed country. As the aftermath of that election reminded us, with its tales of incorrect registration records, confusing ballots, defective voting machines, inconsistent vote counts, biased officials, unprecedented judicial intervention, and defeat of the winner of the popular vote, voting involves much more than simply showing up at the polls.

Keyssar, Alexander. The Right to Vote: The Contested History of Democracy in the United States. New York: Basic Books, 2000.