Native Americans have not always been eligible for American citizenship, and when they have been eligible, the citizenship that they obtained has been and often remains different in crucial respects from the citizenship rights enjoyed by other Americans. Not all persons considered citizens enjoy equal rights or status. The right to vote, to serve in the military, to make contracts, to serve on juries, or to work has not always followed from formal citizenship. And federalism concerns mean that a number of rights and privileges of citizenship have been left to the determination of states. In the case of American Indians (the term generally preferred for those Native Americans who lived within the territory that would eventually form the forty-eight contiguous states, grants of citizenship were often conditioned upon ceding land, accepting and living on individual plots, and even taking up approved habits. Citizenship has been further complicated by the shifting historical and legal relationship between membership in the nation and tribal membership. An adequate consideration of citizenship must look not only at when and how American Indians were made citizens of the United States but also at other important factors that shaped the meaning of that citizenship.

The Supreme Court decisions Cherokee Nation v. Georgia, 30 U.S. 1 ( 1831 ), and Worcester v. Georgia, 31 U.S. 515 ( 1832 ), established a guardian–ward relationship between American Indians and the federal government. Chief Justice John Marshall read the supremacy clause (Article VI) and the commerce clause (Article I, Section 8) of the Constitution as giving Congress exclusive power to make treaties and regulate commerce with tribes, defining Indian nations as “domestic dependent nations” under the tutelage of the federal government. Thus the federal government had the authority to make determinations about what was in the best interest of its wards; this included, for instance, banning alcohol sales to tribal Indians before national Prohibition.

Although the Fourteenth Amendment declared that “[a]ll persons born or naturalized in the United States, and subject to the jurisdiction thereof, are citizens of the United States and of the state wherein they reside,” Congress did not wish to make Indians citizens and soon made this clear. In dealing with the apportionment of representatives, the Fourteenth Amendment also stipulated that all persons, including former slaves, were to be counted, “excluding Indians not taxed.” The nontaxed status of Indians became an argument used by states to exclude them from the vote, even after they acquired formal US citizenship. Despite the Fifteenth Amendment, states retained a great deal of control over rules and qualifications for voting and administration of elections.

American Indians could not become citizens by naturalization because they were not born outside the United States. During the treaty era from 1778 to 1871, some Native Americans became citizens by treaties with specific tribes that offered male heads of household citizenship provisional on their accepting allotment of land in severalty (private as opposed to common ownership); sometimes this was offered as an alternative to relocating with their tribe to a new reservation. After 1871, however, that path to citizenship was removed. Congress ended the treaty era by legislation (25 U.S.C. § 71), and subsequently the presence of tribal sovereignty meant that tribal citizens were not entitled to the same rights and privileges as were US citizens; rather, their rights and privileges were those recognized by their tribe, except where expressly legislated for by Congress (as specified in Ex parte Crow Dog, 109 U.S. 556 [1883]). During this period, taking up the habits of civilized life and living among Caucasians did not make American Indians citizens either. In Elk v. Wilkins, 112 U.S. 94 ( 1884 ), the Supreme Court held that only an affirmative act of the United States could make someone born under tribal authority an American citizen. 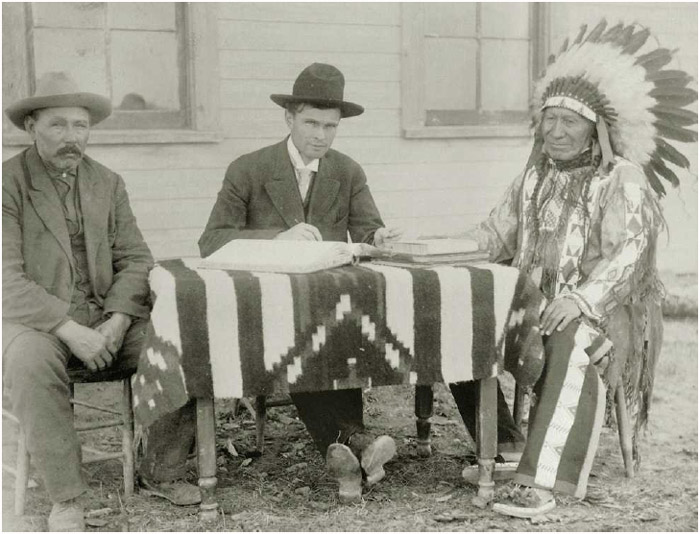 The General Allotment Act of 1887, known as the Dawes Act (24 Stat. 388, ch. 119), was expected by many of its proponents to settle the question of citizenship for American Indians. Its chief architects believed that when individuals accepted land allotments and took up residence there, they would become citizens at that point. Under the Dawes Act, however, when accepting their allotments American Indians entered a twenty-five-year period of tutelage to ostensibly learn how to protect their own interests. During this period Indians could not make or sign contracts to alienate their lands unless declared competent through administrative hearings. “Progressive” Indians were often distinguished from “blanket” Indians, the former rewarded for their willingness to adopt middle-class behaviors and practices of the dominant race.

A tension existed between citizenship—which implied autonomy and independence from protection—and continuing legislative and regulatory efforts by the federal government to protect American Indians from unscrupulous dealings and from alcohol abuse. In Matter of Heff, 197 U.S. 488 ( 1905 ), the Supreme Court held that American Indians accepting allotments immediately became American citizens and could no longer be protected under the guardianship principle; as a result, there was some resistance to rushing citizenship for those who were thought unable to protect themselves and their little remaining property. About a decade later, United States v. Page 308  |  Top of ArticleNice, 241 U.S. 591, 598 ( 1916 ), overturned that decision and held that “[c]itizenship is not incompatible with tribal existence of continued guardianship,”removing many objections to granting citizenship to those American Indians who had not yet become citizens. And in Winton v. Amos, 255 U.S. 373 ( 1921 ), the Court reiterated that Congress had to determine when guardianship would cease, “the mere grant of rights of citizenship not being sufficient to terminate it”(255 U.S. at 392)

Americans Indians had served in the US (and Confederate) military during the nineteenth century; a significant number served in World War I, and approximately fortyfour thousand served in World War II, including some women. Those honorably discharged could apply for citizenship after World War I, and in 1924 the Indian Citizenship Act granted citizenship unilaterally to all those who had not yet been made US citizens, whether or not they wished to identify as such. But citizenship did not, even then, necessarily mean voting rights. A handful of states still denied the vote to “Indians not taxed,” one denied the vote to anyone who lived on a military or Indian reservation, and one state constitution denied the vote to anyone under guardianship ( Keyssar 2009 ).

Although the extension of citizenship to all American Indians through the Indian Citizenship Act did not immediately translate into equivalent rights enjoyed by other US citizens, neither did it end the rights and privileges associated with tribal citizenship, particularly the “right of any Indian to tribal or other property” (8 U.S.C. § 1401). In protecting such individual rights to tribal property and by extension the right to participate in tribal life, the granting of US citizenship also affirmed tribal citizenship ( Bruyneel 2007 ). Therefore American Indians possess a form of dual citizenship, leaving intact the sovereign status of tribes and the specific rights to which tribal citizens were entitled. Where these two forms of citizenship conflict, the Supreme Court, in Santa Clara Pueblo v. Martinez, 436 U.S. 49 ( 1978 ), significantly limited the federal judicial review of tribal actions against its citizens, unless Congress had used its plenary authority to explicitly prohibit tribal governments from engaging in the action in question.

Nackenoff, Carol. “Constitutionalizing Terms of Inclusion: Friends of the Indian and Citizenship for Native Americans, 1875–1925.” In The Supreme Court and American Political Development, edited by Ronald Kahn and Ken I. Kersch. Lawrence: University Press of Kansas, 2006.