Mass production is the manufacture of goods in large quantities using standardized designs so the goods are all the same. Assembly-line techniques are usually used. An assembly line is a system in which a product is manufactured in a step-by-step process as it moves continuously past an arrangement of workers and machines. This system is one of the most powerful productivity concepts in history. It was largely responsible for the emergence and expansion of the industrialized, consumer-based system of the twentieth and twenty-first centuries. 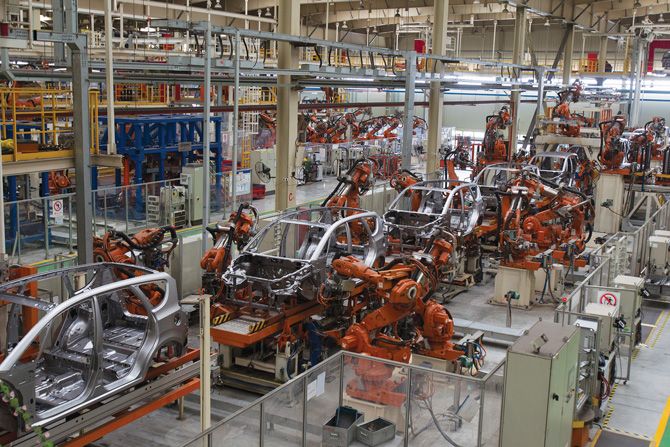 The early successes of the American System are often attributed to Eli Whitney (1765–1825). He adapted mass production techniques and the interchangeability of parts to the manufacture of muskets (a type of gun) for the U.S. government in the 1790s.

Some people say that Whitney's musket parts were not truly interchangeable and that credit for the American System should go to John Hall (1781–1841), the New England gunsmith who built flintlock pistols for the government. Hall built many of the machine tools needed for precision manufacturing. He achieved a higher level of interchangeability and precision than did Whitney.

Oliver Evans's (1755–1819) many inventions in the flour milling process led to an automated mill that could be run by a single miller. Samuel Colt (1814–1862) and Elijah King Root (1808–1865) were very successful innovators in the development of parts for the assembly-line production of firearms. Eli Terry (1772–1852) adapted mass production methods to clock-making in the early 1800s. George Eastman (1854–1932) made innovations in assembly-line techniques in the manufacture and developing of photographic film later in the century.

Credit for the development of large-scale, assembly-line, mass production techniques is usually given to Henry Ford (1863–1947) and his innovative Model T car production methods, which began in 1908. Cars were a relatively new invention and were still too expensive for the average person. Many were too heavy or low powered to be practical means of transportation. Ford set out to produce a light, strong car for a reasonable price.

The Methods of Henry Ford

Groups of workers at Ford initially moved down a line of parts and subassemblies, each worker carrying out a specific task. But some workers and groups were faster or slower than others, and they often got in each other's way. So Ford and his technicians decided to move the work instead of the workers.

Beginning in 1913, Ford's workers stood in one place while parts came by on conveyor belts. The Model T car moved past the workers on another conveyor belt. Car bodies were built on one line and the chassis (floor) and drive train (engine and wheels) were built on another. When both were essentially complete, the body was lowered onto the chassis for final assembly.

It has been said that Ford took the inspiration for his assembly line from the meat-processing and canning factories that moved carcasses along lines of overhead rails as early as the 1840s. Although he was not the first person to use the assembly-line technique, Ford can certainly be viewed as the most successful of the early innovators due to one simple fact: Ford envisioned and fostered mass consumption as a natural consequence of mass production. His techniques lessened the time needed to build a Model T from about 12 hours to 1 hour. The price was reduced as well: from about $850 for the first Model T in 1908 to only $290 in 1927.

Technique Puts an End to Craftsmanship

Assembly-line techniques required changing the skills necessary to build a product. Previously, each worker was responsible for the complete manufacture and assembly of all the parts needed to build any single product. This work was done by hand and relied on the individual worker's skills.

Mass production and parts interchangeability demanded that all parts be identical. Machines rather than individuality came to dictate the production process. Each part was duplicated by a machine process. The craft tradition, so important in human endeavor for centuries, was abandoned. Assembly of these machine-made parts was now divided into a series of small repetitive steps that required much less skill than traditional craftsmanship.

Modern mass production techniques changed the relationship of people to their work. Mass production has replaced craftsmanship, and the repetitive assembly line is now the world's standard for all manufacturing processes.