AFGHANISTAN, SOVIET INVASION OF. At the end of December 1979, Soviet troops moved into Afghanistan, setting off an international crisis. The situation had been building since April 1978, when a coup led by the pro-Soviet Armed Forces Military Council installed a Marxist government under the leadership of Noor Mohammed Taraki. Rebel groups resisted, and fighting intensified. In February 1979, rebel forces kidnapped U.S. ambassador Adolph Dubs, who died in a shoot-out between the rebels and government forces. In September 1979, Taraki resigned after a bitter power struggle, and the government passed into the hands of Hafizullah Amin. After barely two months in office, Amin was replaced by Babrak Karmal, who had invited the intervention of Soviet troops and who was supported by Moscow. The Soviet government insisted that it was sending in a "limited military contingent" to repel aggression from abroad.

The U.S. government denounced the Soviet invasion. While aiding the rebels with advisers and arms, the administration of President Jimmy Carter curtailed U.S. grain shipments to the Soviet Union, cut off sales of high-technology equipment, and imposed limits on Soviet fishing privileges in U.S. waters. Carter's most publicized action was to forbid participation by U.S. athletes in the Olympic Games held in Moscow during the summer of 1980. In what is known as his "Evil Empire" speech, President Ronald Reagan in 1982 noted that it was not democratic nations that had invaded Afghanistan. He referred to forces seeking conflict in the world as "totalitarian evil." The Reagan administration supplied the Afghan rebels with Stinger surface-to-air missiles, which substantially reduced the effectiveness of Soviet airpower in the war.

The Afghan war was a great drain on the Soviet military, and it cost the Soviet regime significant international prestige. Soviet leader Mikhail Gorbachev withdrew the last Soviet troops in February 1989. After the Cold War ended in 1990, the United States turned its interest away from Afghanistan, and the increasingly fundamentalist Islamic nation slid into the second phase of a civil war that had begun in 1978. 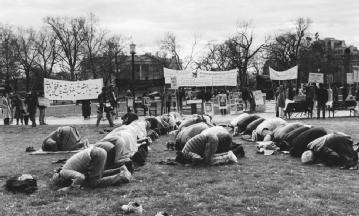 Demonstration for Afghanistan. Muslims kneel in prayer at Lafayette Park in Washington, D.C., across from the White House, during a protest against the Soviet occupation of Afghanistan. AP/WIDE WORLD PHOTOS