By: Islamic State of Afghanistan

Date: The decree enitled "General Presidency of Amr Bil Marof, Kabul, December 1996" was part of a series of three decrees (or letters) issued by the religious police of Afghanistan's Taliban regime in December, 1996.

Source: Letter from the Cultural and Social Affairs Department of General Presidency of Islamic State of Afghanistan.

About the Author: This is an edict given by the Taliban government, which had come to power in Afghanistan in September 1996. Amr Bil Marof is a reference to Islamic fundamental Sha'ria law and roughly translates into English as "spreading good and forbidding evil."

When the Taliban took control of Kabul at the end of September 1996, and with it Afghanistan's system of government, one of their first acts was to hang President Mohammed Najibullah and his brother in a public square. Their message to the watching world was as blunt as it was simple: no prisoners would be taken in the pursuit of the Taliban's fundamentalist beliefs.

Afghanistan's long-running war with the former Soviet Union (USSR) from 1979 to 1989 had bred a state of religious foment within the country. Comprised of a patchwork of ethnicities and minorities, a state of national unity had never really arrived in Afghanistan. Instead, the country's main unifying force was a common adherence to Islam. The resistance force, the Mujahideen, exploited this adherence, building up a patchwork of forces under local warlords to stage a highly effective guerilla war against the Soviets. These freedom fighters were trained, armed, and financed by successive U.S. administrations.

Following the withdrawal of Soviet forces in 1989, the Soviet-backed government soon lost ground to the Mujahideen, and, in April 1992, Kabul fell to its forces. Mujahideen rule soon slipped into anarchy as rival factions fell out with each other and Afghanistan moved into a state of civil war, with local warlords competing with each other on a regional basis.

This weakened state allowed the Taliban (whose name literally translates as "religious students") to step in. During both the Soviet occupation and civil war, the Taliban were organized as part of the Mujahideen but did not rise to pre-eminence until a group of well-trained Taliban members were chosen by Pakistan to protect convoys trying to open trade routes from Pakistan into Central Asia.

Under the leadership of Mullah Mohammed Omar, the Taliban promised order by adopting a strict interpretation of Sha'ria (Islamic law). Not only was this set of laws notoriously severe, but also were an incentive to others to conform. Enforcement was often carried out in public. Public executions and other punishments, such as floggings, became regular events at Afghan soccer stadiums. Sports and even Page 211  |  Top of Article 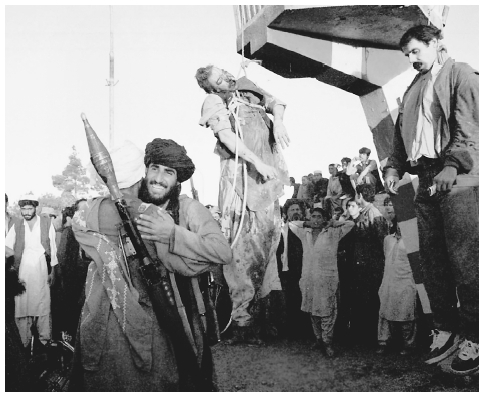 Taliban fighters greet each other in Kabul where the bodies of former Afghanistan President Najibullah and his brother Shahpur Ahmedzai hang. AP/WIDE WORLD PHOTOS childrens' diversions, such as kite flying, were outlawed, as were television viewing and music listening. Men were not to shave or cut their beards, and women were to stay at home or to wear a burqa (a long, loose-fitting garment that covers the face and body) if they ventured outside.

The military gains made by the Taliban were considerable. Starting with the capture of Kandahar in November 1994, they went on to take Herat a year later and Jelalabad and Kabul in September 1996.

Letter from the Cultural and Social Affairs Department of General Presidency of Islamic State of Afghanistan states that:

The professional delegates of this department are in charge to punish violators according to Islamic principles.

2. Rules of work for the State hospitals and private clinics based on Sharia principles:

3. Letter from the Cultural and Social Affairs Department of General Presidency of Islamic State of Afghanistan No. 6240 dated 26.09.1375 states: The role and regulation of Amr Bil Marof Wa Nai Az Munkir is to be distributed via your office to all whom it may concern for implementation.

3a To prevent sedition and uncovered females (be hejab): No drivers are allowed to pick up females who are using Iranian burqa. In the case of violation the driver will be imprisoned. If such kinds of female are observed in the street, their houses will be found and their husbands punished. If the women use stimulating and attractive cloth and there is no close male relative with them, the drivers should not pick them up.

3b To prevent music: To be broadcasted by the public information resources. In shops, hotels, vehicles and rickshaws cassettes and music are prohibited. This matter should be monitored within five days. If any music cassette is found in a shop, the shopkeeper should be imprisoned and the shop locked. If five people guarantee, the shop could be opened and the criminal released later. If a cassette is found in a vehicle, the vehicle and the driver will be imprisoned. If five people guarantee, the vehicle will be released and the criminal released later.

3c To prevent beard shaving and its cutting: To be broadcasted by the public information resources. After one and a half months if any one is observed who has shaved and/or cut his beard, he should be arrested and imprisoned until his beard gets bushy.

3d To prevent not praying and order gathering prayer at the bazaar: To be broadcasted by the public information resources that the prayers should be done on their due times in all districts. The exact prayer time will be announced by the Amr Bil Marof Wa Nai Az Munkir department. Fifteen minutes prior to prayer time the front of the mosque, where the water facilities and possibilities are available, should be blocked and transportation should be strictly prohibited and all people are obliged to go to the mosque. At the prayer time this matter should be monitored. If young people are seen in the shops they will be immediately imprisoned. If five people guarantee, the person should be released, otherwise the criminal will be imprisoned for ten days.

3e To prevent keeping pigeons and playing with birds: To be broadcasted by the public information resources that within ten days this habit/hobby should stop. After ten days this matter should be monitored and the pigeons and any other playing birds should be killed.

3g To prevent kite flying: First should be broadcasted by the public information resources advising the people of its useless consequences such as betting, death of children and their deprivation from education. The kite shops in the city should be abolished.

3h To prevent idolatry: To be broadcasted by the public information resources that in vehicles, shops, room, hotels and any other places pictures/portraits should be abolished. The monitors should tear up all pictures in the above places. This matter should be announced to all transport representatives. The vehicle will be stopped if any idol is found in the vehicle.

3i To prevent gambling: In collaboration with the security police the main centers should be found and the gamblers imprisoned for one month.

3j To prevent British and American hairstyles: To be broadcasted by the public information resources that people with long hair should be arrested and taken to the Amr Bil Marof Wa Nai Az Munkir department to shave their hair. The criminal has to pay the barber.

3k To prevent interest charges on loans, charges on changing small denomination notes and charges on money orders: All money exchangers should be informed that the above three types of exchanging money are prohibited in Islam. In the case of violation the criminal will be imprisoned for a long time.

3l To prevent washing clothes by young ladies along the water streams in the city: It should be announced in all mosques and the matter should be monitored. Violator ladies should be picked up with respectful Islamic manner, taken to their houses and their husbands severely punished.

3m To prevent music and dances in wedding parties: To be broadcasted by the public information resources that the above two things should be prevented. In the case of violation the head of the family will be arrested and punished.

3n To prevent the playing of music drums: First the prohibition of this action to be announced to the people. If anybody does this then the religious elders can decide about it.

3o To prevent sewing ladies' cloth and taking female body measures by tailors: If women or fashion magazines are seen in the shop the tailor should be imprisoned.

3p To prevent sorcery: All the related books should be burnt and the magician should be imprisoned until his repentance.

The above issues are stated and you are requested, according to your job responsibilities, to implement and inform your related organizations and units.

[Editor's note: Letter (2) regarding public health carried the name and authority of Amirul-Mominin, Mullah; Mohammad Omer,Mujahed; and Mofti Mohammad Masoom, Afghani Acting Minister of Public Health. Letter (3) carried the name Mawlavi Enayatullah Baligh, Deputy Minister, General Presidency of Amr Bil Marof Wa Nai Az Munkir. The letter was dated 26.09.1375, a date according to the Hijri calendar (Muslim calendar) equivalent to 1996–1997. The Hijri is a strictly lunar calendar having twelve lunar months in a year of only 354 days (11.25 days short of the solar calendar year). For this reason Islamic holidays vary from year to year and exact equivalent dates to the Gregorian solar-based calendar are difficult and arrived at by algorithms that can vary even according to the Islamic authority issuing the date.]

Even before the September 11, 2001, attacks, in which they were heavily implicated, the Taliban was officially recognized by only three countries. Two of them cut diplomatic links immediately after the 2001 attacks on the United States. Pakistan, the only country to initially keep diplomatic relations with Afghanistan, dropped them when it joined international efforts to defeat terrorism after the 2001 attacks on the World Trade Center in New York and the Pentagon in Washington, D.C.

The Taliban sheltered Osama Bin Laden and his al-Qaeda movement from 1998; they also harbored other extremist groups that struck out into Kashmir, the Fergana Valley (where Uzbekistan, Kurdistan, and Tajikistan meet), and parts of China. The Taliban destabilized their surrounding region by allowing their territory to become a base for the worldwide export of terrorism.

In the late 1990s and at the turn of the century, Afghanistan was best known in the West for the Taliban's fundamentalist ideology. The Taliban denied women the opportunity to pursue an education or receive health care. The international community also condemned the brutality of the Taliban's secret religious police forces and their actions against Afghan citizens.

Al-Qaeda's terrorist attacks on New York and Washington, D.C. in 2001 evoked an immediate response. The United States and its allies ordered the Taliban to hand over Osama Bin Laden, the al-Qaeda leader whom the Taliban had been harboring for three years, or face dire consequences.

Some 1,000 of Afghanistan's most senior clerics gathered in a conclave in the capital Kabul and ruled that America's most wanted man should be asked to leave the country. More ambiguously, however, they also added that any United States-led attack aimed at Page 214  |  Top of Article extracting him by force or punishing Afghanistan for harboring him would result in a declaration of holy war. Bin Laden remained in Afghanistan.

Yasgur, Batya Swift. Behind the Burqa: Our Life in Afghanistan and How We Escaped to Freedom. Wiley, 2002.