France, which has existed in its present form since the 15th century, is Europe’s oldest and largest nation. It is a leader in intellectual trends, the fine arts, fashion, and cuisine. France is also one of the world’s richest countries, and Europe’s leading agricultural producer.

Originally part of the Celtic region known as Gaul, France became part of the Roman Empire until it was overrun by the Franks in the 5th century. At the end of the 10th century, Hugh Capet (c. 938–996) founded the dynasty that was to rule over the French for the next 800 years.

The French Revolution in 1789 was followed by the rise of Napoleon Bonaparte (1769–1821), who conquered much of Europe before his downfall in 1814. In the 20th century, France weathered two world wars and a worldwide economic depression, in addition to its own political and social upheavals and the loss of a large colonial empire. However, it survived to become a major political and economic world power. Nearly 5 million people, many from the nations of North Africa, began immigrating to France to find work and a better way of life. By 2006, about 8 percent of the population was made up of immigrants and there were sometimes clashes between French people and their new immigrant neighbors. 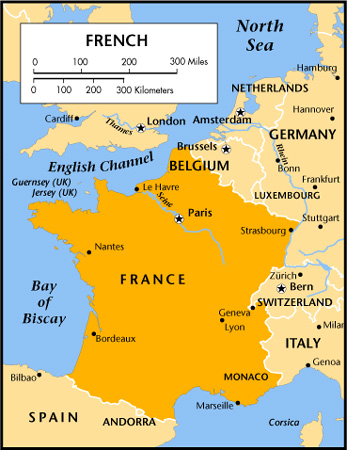 France is the largest country in Europe and is located on the extreme west coast of the continent. Lowlands make up about half of France’s terrain. The other half consists of hills or mountains. The English Channel lies to the north and northwest. The Mediterranean Sea lies to the south and southeast. Belgium, Luxembourg, and Germany are neighbors on the north and northeast. Switzerland and Italy are situated to the east. Spain is to the south.

French, a Romance language with Latin roots, is the national language not only of France’s people but also of some 300 million other people throughout the world. Within France itself, other spoken languages include Breton, Flemish, Spanish, Catalan, Basque, and Provençal.

Native folklore varies from region to region. Ancient Celtic religious sites can still be found in the north, along with remnants of ancient beliefs. The Bretons have many superstitions and rituals accompanying death. Death itself is envisioned as a legendary figure called Ankou, pictured as a skeleton with a scythe, and it is believed that the creaking of the cart he rides in foreshadows the death of a person in the neighborhood.

When a person dies, the doors and windows of the house are traditionally left open so that the soul can depart, and mirrors are turned to face the wall. These customs stem from medieval times, and while their exact origins are unknown, they most likely had to do with superstitions concerning the activities of spirits and protection from them.

New Year’s Eve is typically celebrated with a festive dinner. At midnight, family and friends wish each other a good year by kissing under mistletoe. For Epiphany on January 6, a large round pastry is baked with a bean hidden in it. The person who finds the bean becomes “ruler” for the evening. Mardi Gras, on Shrove Tuesday (the last day before Lent), is marked by parades featuring flowers, floats, and giant cardboard figures. Labor Day on May 1 is celebrated by workers’ parades.

May 8 marks the end of World War II (1939–45). France’s national holiday (the equivalent of Independence Day, July 4, in the United States) is Bastille Day on July 14, which commemorates the storming of the Bastille prison in 1789. It is 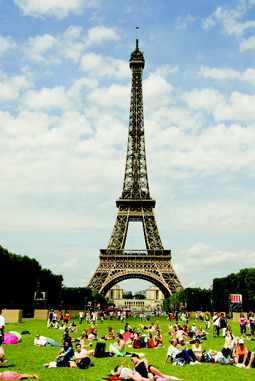 People picnic and relax near the Eiffel Tower in Paris.RONGREER.COM/SHUTTERSTOCK.COM.

accompanied by parades, fireworks, and dancing in the streets. Many French Catholics observe Christmas by attending a midnight Mass.

Many of the rites of passage that young people undergo are religious rituals, such as baptism, first communion, confirmation, and marriage. In addition, many families mark a student’s progress through the education system with graduation parties.

1 cup fresh strawberries or raspberries (frozen berries may be substituted; thaw when ready to use)

The French have a formality and reserve that is sometimes interpreted as rudeness by outsiders. When invited to another person’s home, a French person will always bring along a gift, such as wine or flowers. Both men and women often greet each other by kissing on the cheek.

Same-sex marriages are illegal in France. Although civil unions between gays or lesbians are lawful, the civil union bond does not confer the same rights as does the bond of matrimony.

Long, white-walled, red-tiled farmhouses are a typical sight in the French countryside. Most city dwellers live in rented apartments, often a short distance from where they work. It is popular for city dwellers to maintain a second home in the country, where they can go on weekends.

France’s modern, efficient transportation system is centered in Paris. Therefore, to travel to most places in the country, a traveler often must pass through Paris on the way. The state-owned railways are punctual, with clean, modern trains. The subway in Paris carries 4.5 million passengers per day. The highway system is continually being expanded. It is known for its clearly marked expressways and secondary routes. France has many navigable rivers and canals, and a national airline.

Traditionally, French households were made up of extended families—grandparents, parents, and children. Today, however, a nuclear family with one or two children is the norm. Nonetheless, family ties remain strong. College-age children usually attend school in town, and families get together on birthdays, anniversaries, and holidays. However, France’s divorce rate has doubled since the 1960s. In 2002, 38 percent of marriages ended in divorce. As of 2010, French women have more children than other European Union women, averaging 2 children, compared with an average of 1.5 children for European Union mothers overall.

For their day-to-day activities, the French, both in the countryside and the cities, wear modern Western-style clothing. Perhaps the most typical item of clothing associated with the French is the black beret. It is still worn by some men, particularly in rural areas. The French are renowned for fashion design. Coco 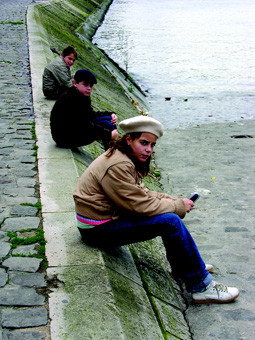 One of the distinct types of clothing worn by the French is the beret.ANA DEL CASTILLO/SHUTTERSTOCK.COM.

Chanel, Yves Saint-Laurent, Christian Dior, and Jean-Paul Gautier are all French fashion design houses whose creations are worn by people around the world.

Traditional regional costumes are still worn at festivals and celebrations. In Alsace, women may be seen in white, lace-trimmed blouses and aprons decorated with colorful flowers. Women’s costumes in Normandy include white, flared bonnets and dresses with wide, elbow-length sleeves.

The French are famous for their elaborate, well-prepared cuisine. Each region of the country 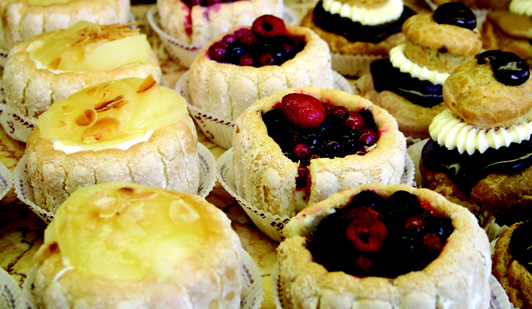 The French are well known for their elaborate and flavorful pastries.AMSIMO/SHUTTERSTOCK.COM.

has its own specialties. Central France is famous for boeuf bourguignon, beef in red wine sauce. Southern France has a typical Mediterranean cuisine that depends heavily on garlic, vegetables, and herbs. One of its typical dishes is a vegetable stew called ratatouille.

A recipe for the classic French dessert, Crêpes Suzette, appears on page 200. To make the crêpes (very thin pancakes), French cooks use a special crêpe pan. Any small frying pan will work, but one with sloping sides is best

The French typically eat a modest petit déjeuner (pe-TEE day-jhe-NAY), or breakfast, of café au lait (ka-FAY oh-LAY), which is coffee with milk, and croissants or bread and butter. Déjeuner (day-jhe-NAY), or lunch, is a three- or four-course meal consisting of a main dish plus appetizer, salad, and dessert. Díner (dee-NAY), or dinner, is a lighter meal. The French are famous for their wines, which are commonly served at both lunch and dinner.

Education is required between the ages of 6 and 16. Public education is free. After five years of primary school, students spend four years at a middle school called a collège (koh-LEJ). The next three years are spent either at a general lycée (lee-SAY) for those planning to go on to college, or at a vocational school.

After receiving their baccalauréat (back-ah-lahr-RAY-ah) degrees, students may go on to a university or to a grand école (grahn eh-COAL), which offers preparation for careers in business or government service.

About 72 percent of the French labor force is employed in service-related jobs, 24 percent in industry, and only 4 percent in agriculture. From 2008 to 2010, the unemployment rate in France climbed from around 7 percent to 9.5 percent, corresponding with the effects of the global economic crisis. The workweek averages 35 hours, and the workday can begin as early as 6 or 7 a.m. There is a two- to

French children enjoy playing a simple marble game. The game can be played near any wall with about 3 to 6 feet (1 to 2 meters) of smooth surface in front of it. A line is drawn 3 feet (1 meter) from the wall and parallel to it. Taking turns, each player rolls a marble toward the wall. The marble coming closest to the wall without touching is the winner. More rounds of the game can be played by drawing the line farther away from the wall.

three-hour break for lunch, the main meal of the day, and the workday usually ends at about 7 p.m. Most French workers get five weeks of paid vacation per year. Most people take the month of August for vacation.

Activities such as gardening, home improvement, and cooking are popular leisure-time pursuits. Television is also popular, and France has 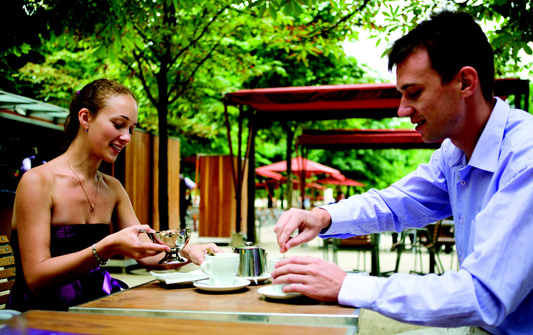 Sidewalk cafés are popular throughout Paris and other cities in France.EKATERINA POKROVSKY/SHUTTERSTOCK.COM.

one of the world’s highest rates of movie attendance. Vacation trips—especially to the beach in August—are favorite activities among the French.

As of 2009, some 61 million mobile phones were in use in France. That same year, the number of Internet users reached more than 45 million.

France is affected by many of the major problems facing other European nations, such as high unemployment, illegal drug use, pollution, and inadequate housing. There are still sharp class divisions and great contrasts between the income of the rich and the poor. In addition, services are lacking for immigrants and the elderly, whose numbers are increasing. An increase in the Page 205  |  Top of Articlenumbers of African, North African, and Arab immigrants has led to an increase in discrimination against those groups. Strikes and protests are another source of instability.

Gender inequality is a long-standing issue in France. Women were not given the right to vote until 1944. Women in France still face open discrimination in the workforce. Additionally, as of 2011, French women earned about 26 percent less than men. The French Constitution was amended in 1999 to promote equal access for men and women to elected positions, yet in 2011, 82 percent of parliamentary seats were held by men.