When Herbert Hoover (1874–1964; served 1929–33) was inaugurated as the thirty-first president of the United States in March 1929, it seemed to most Americans that the economy was thriving. U.S. business was growing, manufactured goods and raw materials flowed from the United States to the rest of the world, and technology was developing at an impressive rate. In reality, there were weaknesses in the system, and the nation soon collapsed into the Great Depression. 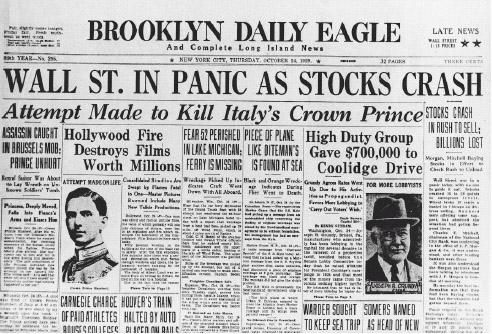 This newspaper headline announces the panic and fear that spread when the stock market collapsed on October 24 and again on October 29, 1929. FPG/HULTON ARCHIVE/GETTY IMAGES

American businesses took advantage of the struggling European economies by making massive investments in Europe. The international financial structure came to be almost entirely dependent on U.S. businesses and banks. It was a system that was strong only as long as the flow of U.S. capital, or monetary investment, continued.

Americans were generally prosperous throughout the 1920s, but the distribution of income across the nation was uneven. Portions of the population were struggling. The agricultural sector never recovered from the recession of 1921–22, so crop prices steadily declined. Industries continued to expand despite indications of overproduction. Wages increased only slowly, and therefore the use of credit, or borrowed money, expanded. A substantial 26 percent of the national income went to only 2 percent of wage earners, indicating a vast, unequal distribution of the prosperity that did exist.

The unstable nature of the U.S. economy was evident in the stock market's behavior during the late 1920s. The stock market is where investors buy and sell shares, called stocks, in large American companies. The market saw rigorous buying and selling from 1927 to 1929. Investors were not necessarily interested in long-term investments. Many pursued a quick profit as stock prices continued to rise. Few investors actually had the full funds to purchase the stocks, so many speculated with

In the wake of the stock market crash, people rushed to withdraw their money from banks, deepening the economic fallout of the Great Depression. MPI/HULTON ARCHIVE/GETTY IMAGES

borrowed money. This behavior drove stock prices up, far beyond any real value in the businesses the stocks represented.

By autumn 1929, the system was out of control. On October 24 and again on October 29, the stock market collapsed as the prices of stocks dropped substantially. It signaled the beginning of a major economic crisis that would last for years and extend throughout the world. During this time, which came to be called the Great Depression, many people lost their savings, their jobs, and their homes.

In the wake of the stock market crash, the U.S. economy crumbled. American industrial production decreased rapidly, and employment reached a staggering low. Up to 25 percent of the working population was unemployed at one point. For farmers, crop prices dropped drastically. People could not afford the basic needs of food and shelter. Makeshift shantytowns, called Hoovervilles , in dishonor of the president, appeared outside cities where the homeless gathered. Breadlines and soup kitchens kept many from starving. Thousands of unemployed people took to the road in search of work where they could find it.

The desperate economic conditions quickly affected the rest of the world. Businesses and investors who lost either their money or their confidence withdrew foreign investments. This led the already rickety European economy to collapse, which placed an even greater strain on U.S. businesses and banks. The entire industrialized world was in a downward economic spiral.

For the first two years of the Great Depression, President Hoover relied on the voluntary cooperation of business and labor to maintain payrolls and production. He encouraged them to foster industrial expansion, avoid strikes, share work when possible, stabilize prices, and provide relief where needed. He stressed that there must not be drastic wage cuts. At first, it seemed that this approach would work.

When the crisis deepened, however, Hoover took positive steps to stop the spread of economic collapse. His best effort was the creation of the Reconstruction Finance Corporation (RFC). The RFC functioned as a loan agency to aid large businesses, such as banks, railroads, and insurance Page 655  |  Top of Articlecompanies. Hoover supported laws, such as the Home Loan Bank Act (1932), to aid people at risk of losing their homes and farms to the banks from which they borrowed to purchase them. The Emergency Relief and Construction Act (1932) provided money for local relief loans and public works.

Hoover had his limits, however, and refused to support direct federal aid to the unemployed. Believing that it would lower wages to a bare minimum and reward laziness, he insisted that helping the unemployed was the responsibility of local, not federal, agencies. Though Hoover is widely regarded as a do-nothing president, he worked hard to fix the nation's woes. His successor, President Franklin D. Roosevelt (1882–1945; served 1933–45), would get the credit for really helping the nation, though he built upon many of Hoover's programs and ideas.

Roosevelt and the New Deal

President Roosevelt took office in 1933. With the economic crisis at its height, Roosevelt immediately dedicated himself to creating a flood of legislation aimed at relief, reform, and recovery. Roosevelt's advisors, known as the “brain trust,” worked to establish the overall domestic policy that would become known as the New Deal .

The flurry of relief measures would include programs designed to assist farmers and unemployed workers who faced impossible financial challenges. Recovery measures were designed to normalize economic activity and to restore faith in the banking system. Measures aimed at reform would work to protect consumers by regulating businesses and to provide assistance to the elderly and unemployed. Many of these programs were introduced during the first few months of Roosevelt's term, referred to as The Hundred Days. As the government accepted a much greater responsibility for the general welfare of its citizens and the regulation of the economy, Roosevelt restored a measure of confidence to the country. Opponents of Roosevelt's New Deal feared that it amounted to communism.

Many of the programs that were introduced during Roosevelt's presidency still exist today. The Social Security Act of 1935 provided retirement payments for workers and benefits for widows, orphans, and the needy. The National Labor Relations Act (1935) established the right to choose and join unions without fear of discrimination. The U.S. Housing Act (1937) provided for federal housing projects, and the Glass-Steagall Page 656  |  Top of ArticleAct (1933) established a federal program of insurance for bank deposits. Though not all of Roosevelt 's New Deal legislation was effective or long-lasting, the progressive ideas served to restore American optimism.

By early 1937, there were definite signs of recovery. It was obvious that Roosevelt's New Deal legislation had eased much of the nation's distress. The economy, however, experienced another sharp decline, almost as bad as in 1929.

Though conditions improved again by mid-1938, it was the onset of World War II (1939–45) that brought an end to the Great Depression. The needs of war produced new, heightened demands for production and labor that Americans were eager to fill. With many men drafted to serve the war effort abroad, there were plenty of jobs at home. Hence war allowed the United States to enjoy another period of industrial prosperity.