Railroads, Federal Land Grants to the

Railroads, Federal Land Grants to the

The Pacific Railway Act provided that companies agreeing to undertake the construction of transcontinental rail lines would be eligible for loans ranging from $16,000 to $48,000 per mile of track laid. The precise amount of the loan was determined by the difficulty of the terrain through which the construction passed. The government loaned a total of $64,623,512 to the transcontinental companies. The loans were for the most part paid back at 6 percent interest. The law also stipulated that a company could receive up to 20 sections (or square miles) of land for every mile of track laid to be granted in alternate sections (in a kind of checkerboard pattern) in an area 40 miles to either side of the proposed right of way. Meanwhile the federal government kept the plots of land between those awarded to the railroad companies. Whereas the companies would use some of their land for train stations, warehouses for cars and repair equipment, and other buildings necessary to maintain rail lines, the government used some of the public land to provide services to the railroads. The rest of the land was sold for profit as both politicians and entrepreneurs hoped that building the railroads would encourage settlement of the land on either side of the lines. Often, when new settlers arrived, both the government and private businesses would make their land available for purchase.

To qualify for a subsidy a company had to agree to build track and carry mail, government passengers, and freight at reduced rates. The government offered these incentives because private banks were for the most part unwilling to loan money at reasonable interest rates to fund railroad construction, and companies were unwilling to borrow money at the rates offered. In short the risk was too high for both parties because transcontinental tracks had to be laid on difficult terrain in sparsely populated 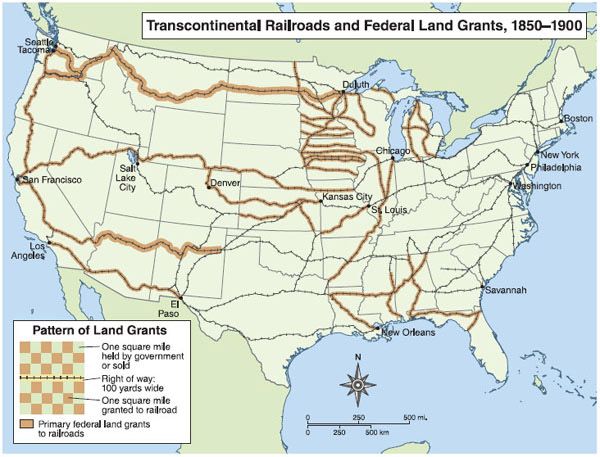 To encourage the construction of the railway system, the U.S. state and federal governments granted approximately 180 million acres of public land to railroad developers in the second half of the nineteenth century. For every mile of track laid, a company could receive up to 20 sections (or square miles) of land, granted in alternate sections (in a kind of checkerboard pattern) in an area 40 miles to either side of the proposed right of way. Meanwhile the federal government kept the plots of land between those awarded to the railroad companies. XNR PRODUCTIONS. COPYRIGHT © CENGAGE LEARNING.

areas of the country. Although the government was willing to assume the risk because many politicians thought that large-scale railroad construction projects linking the coasts would stimulate the economy by establishing trade networks throughout the country, such generous federal funding created numerous opportunities for corruption. For example, in order to obtain more land from the government, railroad companies often chose circuitous routes instead of laying track in a straight line. Also, rather than subcontracting with authentic third parties, some railroad entrepreneurs set up their own construction companies, which had low standards and were overpaid for the work they did.

Most of the loans and land grants distributed under the Pacific Railway Act went to the first five companies to build transcontinental lines: the Union Pacific, Central Pacific, Northern Pacific, Southern Pacific, and Santa Fe. These railroads received a total of 130 million acres of land, with the largest single grant (44 million acres) going to the Northern Pacific line. The states added another 50 million acres of land grants, and local communities subsidized railroad companies by providing land for depots and rights of way, as well as tax exemptions. Whereas the federal and state land grant programs were designed to promote the building of trunk (main) lines, local subsidies were designed to facilitate the building of connecting lines. Although not all lines were built in this way, the effect was to stimulate railroad building in general. Hence, the national railroad system expanded from 9,000 miles in 1850 to 87,000 in 1885.

Although government aid made substantial contributions to the U.S. railroad system, only 18,738 miles of railroad line (or 8 percent of the country's total railroad mileage) were built as a direct result of federal land grants and loans between 1860 and 1920. Most of the railroads were built by private enterprise—in some cases with state and local support.

million acres. At the time the value of this land was about $1 per acre, which was the average price realized by the government for sales in the land grant states during 1850 to 1871. The total value of the land granted to these companies was approximately $180 million. Later much of the land was sold by the railroad companies at an average price of $2.81 per acre, with the land closest to the rails being the most expensive. These sales offset a portion of the construction costs, which were approximately $168 million.

Although government aid made substantial contributions to the U.S. railroad system, only 18,738 miles of railroad line (or 8 percent of the country's total railroad mileage) were built as a direct result of federal land grants and loans between 1860 and 1920. Most of the railroads were built by private enterprise—in some cases with state and local support. Nevertheless federal grants were important because the building of these lines opened up the region of the country west of the Mississippi and stimulated settlement.

Not everyone applauded the subsidies. For example, the land grant and loan system under the Pacific Railway Act received harsh criticism from reformers who argued that it represented a vast giveaway of money and public property to assist businessmen who made vast fortunes. As a result, the federal aid program was discontinued in 1871—despite the fact that the loans were for the most part repaid and the railroad companies did not reap vast fortunes from the resale of land grants. Much of the land that railroad companies received, particularly the real estate in the Great Plains, never became populated. Overall, the country benefited immensely from the rapid construction of the railroads, which produced a viable transportation system connecting all portions of the nation and making a substantial contribution to national unity.

Fishlow, Albert. American Railroads and the Transformation of the Antebellum Economy. Cambridge: Harvard UP, 1965. Print.

Riegel, Robert R. The Story of Western Railroads: From 1852 Through the Reign of the Giants. Lincoln: U of Nebraska P, 1964. Print.