America was still at war on 27 August 1918 when two sailors reported to sick bay at Common-wealth Pier in Boston. By 31 August the Navy Receiving Ship had 106 flu cases. In September an estimated eighty-five thousand people in Massachusetts had contracted the disease, and hundreds died of flu and pneumonia. Little girls at school in Massachusetts jumped rope to a new ditty at recess, not knowing that within the coming month seven hundred people would die in Philadelphia in a single day:

In early May of 1918 news coming from Madrid told of a mysterious malady that was raging through Spain in the form of what was often called "the grippe." Symptoms included much sneezing, reddening and running of the eyes and nose, chills followed by a fever of 101 to 103 degrees, aching back and joints, loss of appetite, and a general feeling of debility. It differed from the grippe in that it was more severe and more likely to lead to pneumonia. Soon after, a similar epidemic struck in Switzerland, France, England, and Norway. Carried from Europe in ocean liners and troop transports, the flu would spread all over the East Coast by mid September. By the end of October flu deaths had occurred throughout the country and on both coasts. When it had run its course, it would be the worst pandemic to afflict mankind since the Black Death of the mid fourteenth century. Sweeping through Europe, America, and Asia, the disease would kill 21.64 million, more than one percent of the world's population.

Popularly known as "Spanish" influenza (although it actually began in China), the epidemic affected 80 percent of the people in Spain and nearly one out of every four Americans. Influenza epidemics were familiar to Americans, but the Spanish flu developed into pneumonia and secondary complications with incredible rapidity. Death quickly followed, often within forty-eight 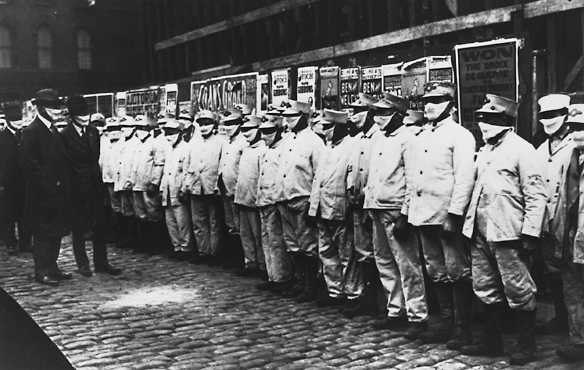 Police in Seattle, Washington, wearing medicated masks to ward of the Spanish flu. © Corbis-Bettmann.
hours of the first signs of illness. More than 550,000 Americans died. Influenza killed infants, young adults, and old people more readily than older children and the middle-aged. Schools were closed; parades and Liberty Loan rallies banned; hospitals jammed; and coffin supplies exhausted in Baltimore and Washington, D.C. Emergency tent hospitals went up throughout America as the epidemic overwhelmed regular hospital facilities. Although officials in World War I were able to protect against such military plagues as typhoid and typhus, neither prevention nor cure was found for the flu or pneumonia. Those who were active in the effort to check the disease found themselves almost as helpless in the face of the pandemic, even with all their modern equipment, as did early physicians in the presence of the plague.

The deadliness and speed of Spanish influenza were unprecedented. Nothing else—no infection, no war, no famine—has ever slaughtered so many in such a short time. Yet the government and the American people were not awed by the magnitude and tragedy of the disease. They ignored it to an amazing extent. The government had a war to fight, and efforts to research and fight the flu were uncoordinated, underfinanced, and feeble. The flu was viewed as a minor obstacle, a problem to be solved in the process of winning the war. Congress made no special appropriation for influenza research at all. The pandemic received meager newspaper coverage and only made the front pages of the New York newspapers while it was killing five and six hundred people a day in New York City. The disease moved fast, killed, and was gone before people had time to realize fully the danger it posed. And unlike other frightening diseases, the flu did not kill all of its victims. While contracting a disease such as rabies was a death sentence, most who caught the Spanish flu were able to recover. Unlike the epidemics of polio or AIDS later in the century, the flu had little impact on organizations and institutions. Its greatest impact was on individuals who lost friends and loved ones.

Where Did the Flu Go?

The causes of the pandemic are still debated. Although the causal agents that produce influenza have been identified, there is a great deal concerning its origins and epidemiology that is still un-known. The key factor cited in explaining the intensity of the outbreak is the virulence of the virus strain involved. Some theories suggest that while the virus was present before 1918 it developed its greater virulence through mutation. Other theories postulate animal reservoirs of influenza, where the disease lurks between epidemics. The reason for the deadliness of Spanish influenza clearly lies in the balance of two factors, each of which defines the other: the virulence of the virus and the vulnerability of its victims. But the influenza of 1918-1919 still keeps its final secrets—where did the flu go? Could it return?

WHEN IT WAS AGAINST THE LAW TO SNEEZE

In an effort to control the spread of the "Spanish" flu in Chicago, the health commission and the chief of police issued orders on 3 October 1918 directing police to arrest violators of the spitting ordinance as well as every person found coughing or sneezing without using a handkerchief. All offenders caught were to be taken directly into court. In the city-wide campaign the police paid special attention to locations that attracted crowds, such as theaters, moving-picture shows, and court-rooms.

Richard Harrison Shryock, The Development of Modern Medicine: An Interpretation of the Social and Scientific Factors Involved (Philadelphia: University of Pennsylvania Press, 1936);