Congress proposed three amendments to the U.S. Constitution in the years after the American Civil War (1861–65). The second proposal, which became the Fourteenth Amendment, established the rights of American citizens to be free from unfair state laws. The rights to due process of law and to equal protection under the law, both from the Fourteenth Amendment, have been particularly important in U.S. Supreme Court cases since 1868.

After the Civil War and the nationwide emancipation of slaves in 1865, southern states enacted legislation called Black Codes to restrict the rights of newly freed blacks. Congress attempted to obstruct the Black Codes by passing the Civil Rights Act of 1866 . The act attempted to define citizenship and to guarantee certain individual rights by federal law.

The act proved to be difficult to uphold, so Congress was motivated to turn its provisions into a constitutional amendment. Incorporating many elements of the Civil Rights Act, Congress proposed the Fourteenth Amendment in June 1866. To become law, a constitutional amendment must be ratified, or approved, by at least three-fourths of the states. The Fourteenth Amendment achieved ratification in July 1868. Under federal Reconstruction law, support for the amendment was a requirement 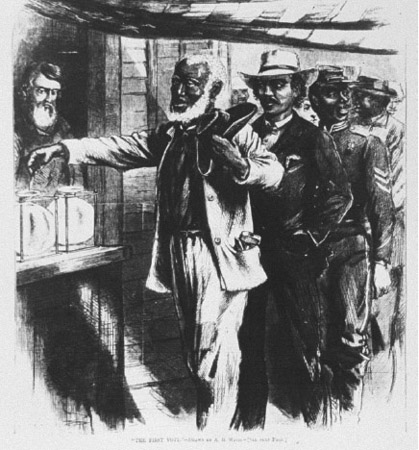 Several black males line up to vote for the first time in an election. The Fourteenth Amendment, while not guaranteeing the right to vote, penalized Southern states if state law denied blacks the right to vote. NATIONAL ARCHIVES AND RECORDS ADMINISTRATION

for former states of the Confederate States of America to be readmitted to the Union of the United States.

The Fourteenth Amendment has five sections. The first section sets forth a national definition of citizenship. It says all people born or naturalized in the United States are citizens of the country and also of the state in which they reside. Section one makes it unlawful for states to deny a citizen the rights of citizenship and to deny any person due process of law and equal protection under the law.

Section two was inspired by the southern practice of denying voting rights to the black population. Under the three-fifths compromise of the original Constitution, every five slaves were counted as equal to three whites. Representation in Congress was established using this rule. With slaves acquiring both freedom and citizenship, the balance of representatives Page 579  |  Top of Articlefor southern states increased. If voting rights were denied to the black population, the effect of greater representation would simply give southern whites more political power.

Sections three and four were also motivated by contemporary issues. Section three took away the power of the president to pardon rebels. Those who had been in military service or held a state or national office prior to 1860 had taken an oath to support the Constitution. As a result, those who had made such an oath but had then participated in the Confederate rebellion were denied the ability to hold any national or state civil or military office. Congress could remove this restriction for an individual with a two-thirds vote in both chambers.

Section four voided all debts acquired to support the rebellion and eliminated all claims for compensation for emancipated slaves. The fifth section gave Congress authority to pass further legislation as needed to enforce the provisions of the Fourteenth Amendment.

Due Process and Equal Protection

Two clauses from section one of the Fourteenth Amendment are the Due Process Clause and the Equal Protection Clause. The Due Process Clause says states shall not deny people “life, liberty, or property, without due process of law.” The meaning of “due process of law” is not certain. In criminal cases, courts usually interpret it to mean that people must have notice of the charges against them and a fair hearing. In civil cases, it often means that the government cannot enforce a law that is arbitrary or unreasonable. These are subjective standards that make fair application of the clause in all cases essentially impossible.