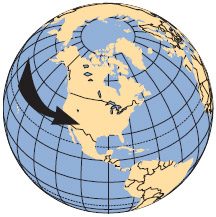 The Midwest region of the United States consists of the states in the center of the country, east of the Rocky Mountains. States considered part of the Midwest are North and South Dakota, Illinois, Indiana, Iowa, Kansas, Michigan, Minnesota, Missouri, Nebraska, Ohio, and Wisconsin. The combined population of these states is over 67 million. The area is known for its plains, which are long stretches of grasslands. Historically, many tornados have touched down in the region, due to the flatness of the land and the area's climate. In Kansas, tornados are considered to be a fact of life, but other Midwest states are also affected. In May 2011, Joplin, Missouri, experienced a deadly tornado that destroyed about 25 percent of the city's buildings and caused an estimated $2 billion in damages and more than 100 deaths. More than a dozen people were killed in a series of tornadoes that struck Indiana, Illinois, Kansas, Missouri, and Nebraska in February 2012. Dodge City, Kansas, is said to be the windiest city in the United States, with an average wind speed of 14 miles (22.5 kilometers) per hour. However, the Midwestern states are not solely made up of flatlands. Many states have natural and artificial lakes and streams. In fact, Minnesota has over 10,000 lakes.

The climate and terrain of the Midwest are perfect for cultivating crops. The Midwest is 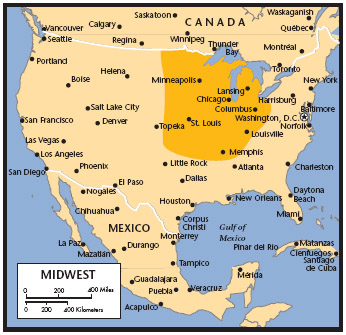 The Midwest region of the United States has many cultural influences in its cooking. Over the decades, people including Germans, British, Italian, Hungarians, Greeks, and Scandinavians immigrated to the Midwestern United States and made it their home. In the early 1700s, the Germans started to arrive and brought beer, sauerkraut, and sausages. They also introduced the tradition of serving meals family style—meats, relishes, soups, vegetables, and pies were set on the table all at one time. The British arrived in the late 1700s and brought pasties (PASS-tees), or meat pies, bread pudding, and roasts with potatoes. The Italians brought pastas and native cheeses, and the Hungarians brought goulash. Lefse (potato bread) and meatballs were introduced by the Scandinavians.

In the late 20th century and early 21st century, the number of Arab and Asian immigrants increased, bringing with them new food traditions. In addition, some urban areas of the Midwest have attracted sizable Latino populations. Their culinary contributions include salsa, spicy peppers, and corn tortillas.

The cities of the Midwest all feature restaurants serving foods from every cooking tradition, from sushi to spicy Szechwan and Mexican food to Ethiopian cuisine. However, the primary influences over cooking styles in the Midwest remain those from the immigrant groups of Eastern, Northern, and Western Europe who settled there during the late 1800s and early 1900s.

3 Foods of the Midwest

Foods of the Midwest are considered to be simple and hearty. Dairy products, such as milk, cheese, and eggs, are common ingredients in Midwestern cooking. Main dishes may include roasts, stews, and dishes made from trout and whitefish. Rice is used in many side dishes and desserts. Wheat bread and cornbread typically accompany meals. Seasoning with spices is generally mild, and fresh herbs such as dill, parsley, and sage may be used to flavor a dish.

The Midwest is famous for its long stretches of grasslands. Corn (Iowa's most famous crop), apples, wheat, and potatoes are some examples of staple crops. Beef, pork, and poultry are produced in many Midwestern states, and trout,

bass, and walleye are just a few examples of fish found in Minnesota's 10,000 lakes.

Many Midwestern foods are based on the season. In summer months (around May to August), picnic foods such as deviled eggs (Indiana is a leading state in egg production), potato and pasta salads, and fresh fruits are enjoyed. Winters once forced cooks to find methods such as smoking, pickling, and canning, to preserve food. Meatloaf (made with ground beef and breadcrumbs), chicken and noodles, and chili (a thick beef and bean stew) are hearty foods to keep people warm and full during the harsh winter weather. 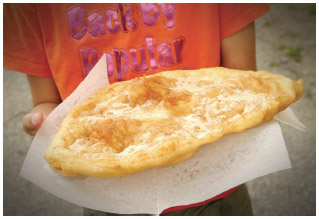 The Midwest is known for its state and county fairs. Various food vendors set up shop at such fairs and offer a wide variety of treats, including a large, fried pastry called “Elephant Ears.” © SEAN BOLT/SHUTTERSTOCK.COM.

1 can (28-ounce) chopped tomatoes, do not drain

The city of Cincinnati, Ohio, is located close to Indiana. It is located in southwestern Ohio and borders the Ohio River. It is famous for its unique chili, which may include such ingredients as allspice, cinnamon, or cloves, and sometimes even chocolate. Cincinnati-style chili is usually served as a topping over a bowl of spaghetti and is popular throughout southern Indiana and elsewhere in the Midwest.

A typical Midwestern meal is considered “all-American.” It might be roast beef, grilled steak, hamburgers, or meat loaf accompanied by potatoes (mashed or baked), green beans, corn on the cob, and apple pie for dessert. Kansas City, Missouri, is a leading producer of beef cattle and is famous for its steaks. Other Midwestern favorites are chicken potpie (a creamy stew of chicken and vegetables baked in a pastry crust), potato salad, wild rice soup, and corn relish. Corn relish is made from fresh yellow corn, vinegar, and sugar, and is flavored with red peppers, onion, and celery. It is usually served with grilled or roasted meat.

Corn on the Cob

Salt and pepper, to taste

4 Food for Religious and Holiday Celebrations

Christian religions dominate in the Midwest, with Christmas and Easter being the main holidays. These holidays are celebrated in generally the same way as the rest of the United States;

it is a time for families to get together and visit and eat. Roasted ham or turkey is a common main course. A variety of vegetables may be served, such as potatoes, carrots, green beans, or corn. Depending on family traditions, gifts are exchanged Christmas Eve or Christmas Day. Children may hunt for colored Easter eggs on Easter, go to church, and eat candy from baskets given to them by the Easter Bunny.

There are many non-religious holidays and festivals celebrated in the Midwest. Thanksgiving Day, a national holiday, commemorates the feast held between the Pilgrims and Wampanoag Indians in 1621. Midwesterners, as most Americans, celebrate Thanksgiving with a menu that typically includes turkey and stuffing, mashed potatoes, cranberries, green bean casserole, rolls, and a variety of pies, such as pumpkin pie. Television sets are usually tuned to Thanksgiving parades in the morning and football in the afternoon.

Food festivals are very popular in the Midwest. In early July, St. Paul (Minnesota's capital) celebrates the Taste of Minnesota Food Festival. Food stands feature roasted corn on the cob, deep-fried walleye, corn dogs, barbeque ribs and chicken, and a variety of soft drinks and beer. The festival lasts for one week and ends each night with fireworks.

The Potato Bowl festival has been celebrated in Grand Forks, North Dakota, since 1965. Held each year in September, it celebrates the potato harvest of the Red River Valley area and offers visitors free french fries and many potatoinspired foods and activities.

The annual week-long Taste of Chicago festival held in July is typical of food festivals held in cities in the Midwest. Each year, this event attracts nearly 70 of the area's finest restaurants, as well as well-known musical acts. It is one of Illinois's top tourist attractions. Milwaukee's Summerfest, similar to the Taste of Chicago, offers visitors a variety of the area's best cuisine and musical entertainment. 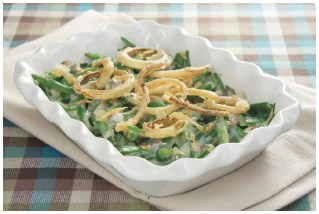 1 can cream of mushroom soup

farmers, who participate in 4-H and similar programs and compete for blue ribbons every summer. The Iowa State Fair, first held in 1854, attracted nearly 1 million visitors in 2010. It is one of the country's largest and most popular state fairs. (The largest attendance was 1.1 million, recorded in 2008.) Its display of a large cow sculpted from butter is a favorite among those who attend.

Midwestern people, like many other people in the United States, usually eat three meals a day and snacks throughout. 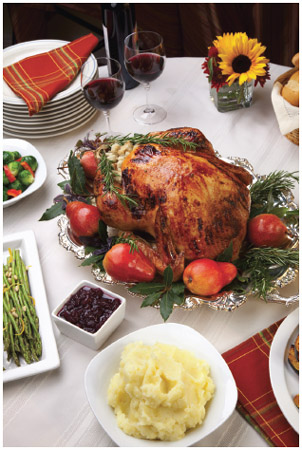 Breakfast may be hearty, with bacon, sausage, eggs, toast or biscuits, grits or oatmeal, and coffee, or a simple doughnut or cinnamon roll with coffee.

Lunch is usually a light meal, with dinner being the main meal of the day. Lunch may be a sandwich (such as a Reuben, made with corned beef and sauerkraut), a salad, or soup. A hamburger and french fries may be a quick lunch picked up at a fast food restaurant. Students may buy lunch at the school cafeteria or carry a lunch

made at home. Barbequed pork sandwiches, chicken nuggets, and hamburgers may be on a typical school cafeteria menu, while a sandwich, potato chips, and fruit may be brought from home.

Snacks eaten in the Midwest are similar to the rest of the United States, and may include potato chips, crackers, caramel corn, and candy.

Dinnertime is usually the time when family members gather to eat and talk about their day. Large dinners are traditionally cooked on Sundays. Dinner, or supper, usually consists of 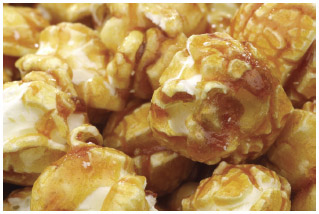 Caramel corn is a popular treat in the Midwest. © PETER ZIJLSTRA/SHUTTERSTOCK.COM.

meat, such as beef, chicken, or pork chops, a vegetable (or vegetable casserole) such as corn, green beans, or carrots, and a starch, such as potatoes, rice, or noodles. Baked beans may also be eaten.

Purchased dough for 1 pizza (thaw according to package directions, if using frozen)

1 can (14½ ounces) yellow or white hominy (found in supermarkets), drained and patted dry 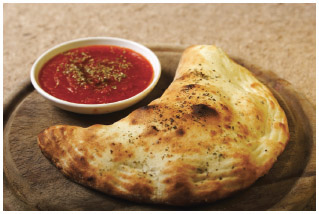 Calzone, a traditional Italian food, is enjoyed by many Americans in the Midwest as well as other regions. © DAN PERETZ/SHUTTERSTOCK.COM.

Dinner is most often eaten at home, but may also be eaten at a “sit-down” restaurant, where diners are waited on, or at a fast food restaurant. The list of fast food restaurants is endless, offering a wide variety of foods. McDonald's offers its regular fare of sandwiches and fries, along with some regional dishes. In the Midwest, for example, grits are on the breakfast menu. Kansas City, Missouri, is known for its beef cattle, and its streets are lined with steak restaurants. Chicago is famous for its deep-dish pizza, which was first made there in 1943. It is baked in a deep dish, so the sides of the crust hold in more cheese and toppings than a thin-crust pizza.

In general, people of the Midwest receive adequate nutrition. The foods they eat come from the land and are plentiful. A variety of crops, such as corn, potatoes, and wheat are grown, and cattle and poultry are raised in abundance. These foods supply not only the Midwest, but also the rest of the United States and abroad. These natural resources contribute to the United States being among the world's leading exporters of wheat and corn. For those who cannot afford it, the U.S. government provides money to pay for school lunches and nutrition programs.