A Sneeze Away: On a Saturday afternoon in Harlem, Dr. Martin Luther King Jr. had a brush with madness and mortality

Dr. Martin Luther King Jr. was almost famous in September 1958. In certain precincts, such as among fellow African-Americans, King was very well known indeed, generally for fighting without violence for civil rights and specifically for having led a year-long boycott that in December 1956 had succeeded in desegregating seating on the municipal bus system in Montgomery, Alabama. King also was well known to ill-wishers who had tried to bomb his front porch, delivered death threats, and arrested him. Always he remained calm. A year earlier, Harper & Brothers had offered King a contract to write a memoir of the bus boycott. Now Stride Toward Freedom: The Montgomery Story, was on store shelves, and King, elated at bringing out his first book, was doing his best to promote sales.

On Saturday, September 20, 1958, King was to sign copies of Stride Toward Freedom in Harlem, uptown Manhattan's historically black neighborhood. However, instead of working with an independent bookstore, his publisher had booked him into E.L. Blumstein's, a mainstream department store at 230 W. 125th St. The choice may have been a coincidence of commerce but was nonetheless politically significant. In June 1934, neighborhood residents had begun to picket Blumstein's, demanding the store hire blacks in sales jobs, not merely the elevator operator and porter positions on offer. The picketing continued until that September, when Blumstein's integrated its sales and clerical force.

With his 1958 appearance, King, 29, was treading on the turf of Harlem-based Malcolm X. The Black Muslim firebrand lately had been voicing scorn, in person and over the radio, for "ignorant" black preachers, not naming King but implying strongly that America's white establishment had brainwashed King and fellow civil rights leaders into being useful fools. Longtime Harlem bookstore owner and black nationalist Lewis Michaux, a friend of Malcolm's, had been speaking out against King for rejecting black booksellers' and readers' support. The night before he was to appear for the signing at Blumstein's, blacks picketed the boxy five-floor department store with placards reading, "Uncle King Are You an Uncle Tom Too! ... Dr. King Prefers Blumstein Instead of Negro Book Stores for his Party ... I Have Dr. King Picture in My Room, Does Blumstein? ... Not too long ago, Blumstein wouldn't hire a Negro!" 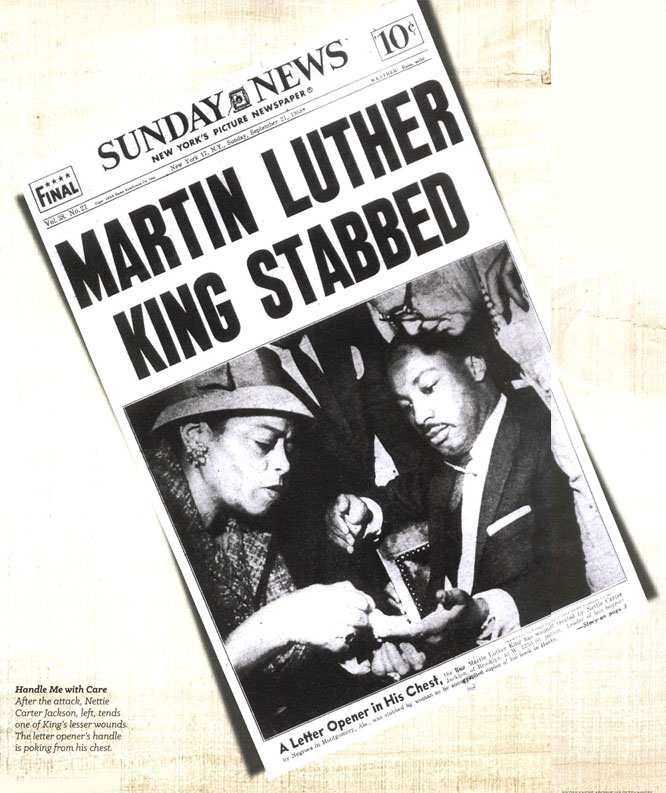 Arriving by car from the Hotel Statler, King entered Blumstein's on the dot of 2 p.m. for his two-hour appearance. The retailer had arranged to have students from Harlem's Wadleigh Junior High host the visitor from Montgomery on the first floor. Two Wadleigh students escorted King through a double line of schoolmates from the school honor guard to the table where he would be greeting visitors and signing books. Owners Jack and Kyver Blumstein were on hand, along with a quintet of black women representing Staten Island, the Bronx, Brooklyn, Queens, and Manhattan. NAACP president Arthur Springarn was there. Ann Arnold Hedgeman, an assistant to New York Mayor Robert Wagner and columnist for New York Age, had helped organize the event. Hedgeman was at King's side, keeping the proceedings moving. Her husband, opera singer Merritt A. Hedgeman, also was in attendance. Both Hedgemans were African-American.

A mixed-race queue of some 50 book buyers and curiosity-seekers--some told a reporter they had come from Alabama to see their hero--was waiting, and for an hour the man of the hour greeted each person who approached, sometimes signing a head shot of himself or posing for a photograph and signing copies of his $2.95 hardback. At around 3, King stood and asked Jack Blumstein if he could use a telephone. The department store owner took the author to an empty office, waited for him for 15 minutes, and when King emerged brought him back to the table, where people remained in line.

One of those was Izola Ware Curry. The Adrian, Georgia, native, 42, had been in Harlem a month. She was having a hard time keeping jobs and making ends meet.

Curry had been obsessing about Martin Luther King, seeing the rising civil rights leader as the source of her personal difficulties and a prominent figure in her incoherent conspiracy theories. Curry regarded King as a "communist" and a "flimflam artist who pimped the community."

That morning in the right pocket of her blue raincoat Curry carried a pearl-handled letter opener made in Japan. Tucked into her brassiere was an Italian-made .32-caliber automatic pistol she recently had bought for $37.24. She wore thick-framed, sequined cat-eye glasses.

King had returned to his seat at the table when Curry walked to the head of the line, hands in her coat pockets.

"Are you Martin Luther King?" she asked. 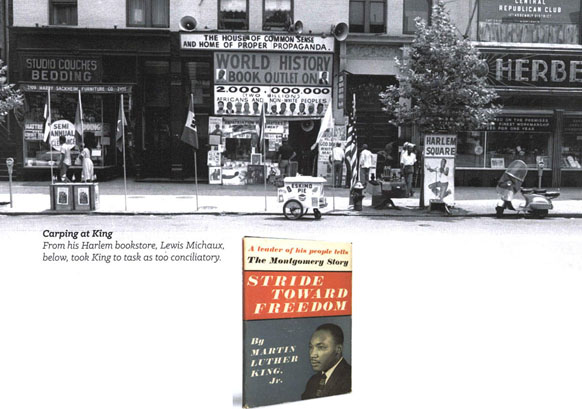 Curry suddenly raised her right arm and with force plunged the letter opener toward the minister's chest. King reflexively raised his left hand, which the letter-opener blade nicked before Curry's stabbing action drove her improvised weapon's point six centimeters into his chest. "I saw a red fleck on his shirt near the collar bone, blood on his hand and a kind of handle protruding from his chest where the blood was showing on his shirt," Hedgeman wrote later.

Staten Island neighborhood representative Nettie Carter Jackson grabbed and held Curry. "Dr. King has ruined my life!" the assailant shouted. "He is no good! The NAACP is no good, it's communistic. I've been after him for six years. I finally was able to get him now!" Law enforcement officers bundled the attacker off to a police station on W. 123rd Street. 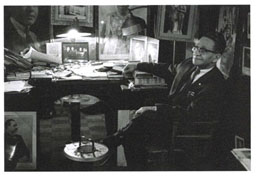 King sat frozen and surrounded as some of those at his side attempted to remove the letter opener lodged in his chest.

"Don't touch that knife until we can get a doctor!" Merritt Hedgeman bellowed. "Everything is going to be all right," King said in a low voice. Someone told him to keep still and conserve his energy. He spoke no more. The retailers and the entertainer lifted the civil rights activist in his chair. Straining not to jostle him or the blade protruding from his bleeding chest, the three carried King, chair and all, to an elevator for a ride to the fifth floor medical station, where a doctor attended to King's hand. An ambulance crew arrived. "We must get him to emergency at once," one of the crewmen said.

At Harlem Hospital, surgeons anesthetized King and worked for two hours and 15 minutes to remove Curry's letter opener, which the attacker had jammed under her target's sternum, grazing his aorta. The main surgeon, Dr. John W. V. Cordice Jr., cut twice between the wounded man's third and fourth ribs, inserting a spreader to clear access to the aorta. Aubre de Lambert Maynard, the hospital's chief of surgery, attempted to remove the blade, but tore his glove on it. Cordice tightened a clamp on the blade to boost leverage. Gripping the clamp, Maynard finally removed the blade. The surgery left King with a scar. Years later, he told a friend, "Each morning as I brush my teeth and wash my face, I am reminded by the cross-shaped scar on my chest that each and any day could be my last day on this earth."

Recuperating at the hospital, King had the company of wife Coretta, his parents, and his younger brother, A.D. Well-wishers, including President Dwight D. Eisenhower and Vice President Richard Nixon, sent around 1,800 cards and notes, some from as far away as Japan. King was "valuable" to "our whole perplexed and anxious species," novelist John Steinbeck wrote. "Get well quickly. We need you." 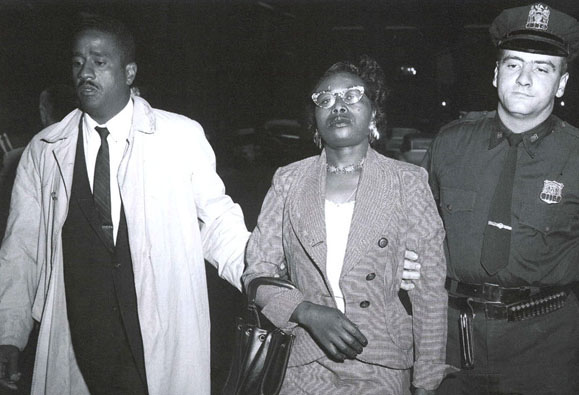 NYPD personnel with Izola Ware Curry after her assault on Dr. Martin Luther King Jr. at a Harlem book signing.

One letter so moved King that he memorized and sometimes recited parts of it through a decade in which he fostered a movement that helped bring African-Americans equal rights legislation, if not equality in fact: "Dear Dr. King: I am a ninth-grade student at the White Plains High School. While it should not matter, I would like to mention that I am a white girl. I read in the paper of your misfortune, and of your suffering. And I read that if you had sneezed, you would have died. And I'm simply writing to say that I'm so happy that you didn't sneeze." King had his correspondent's identity wrong. As Wall Street Journal reporter Cameron McWhirter wrote in March 2018, the letter had come from Jean Kepler, then 37 and living in Pleasantville, New York.

The last time King told the story and recited the letter's contents was on a Wednesday night in Memphis, Tennessee. The letter writer's line about sneezing always got a cheer, and the Memphis crowd roared in jubilation. Shushing listeners, King paraphrased his reply to his white admirer: "I want to say tonight that I, too, am happy that I didn't sneeze." That was April 3,1968. The next evening Martin Luther King Jr. was dead, cut down by a sniper.

Interrogated by police in September 1958, Izola Curry raved incoherently. After she underwent mental health evaluation at Manhattan's Bellevue Hospital, authorities confined Curry at a state hospital for the criminally insane in Matteawan, New York. That facility closed in 1977. Curry was 98 when she died in a nursing home in Jamaica, New York, in 2015. A signed first edition of Stride Toward Freedom recently was offered for sale online, asking price $6,600. 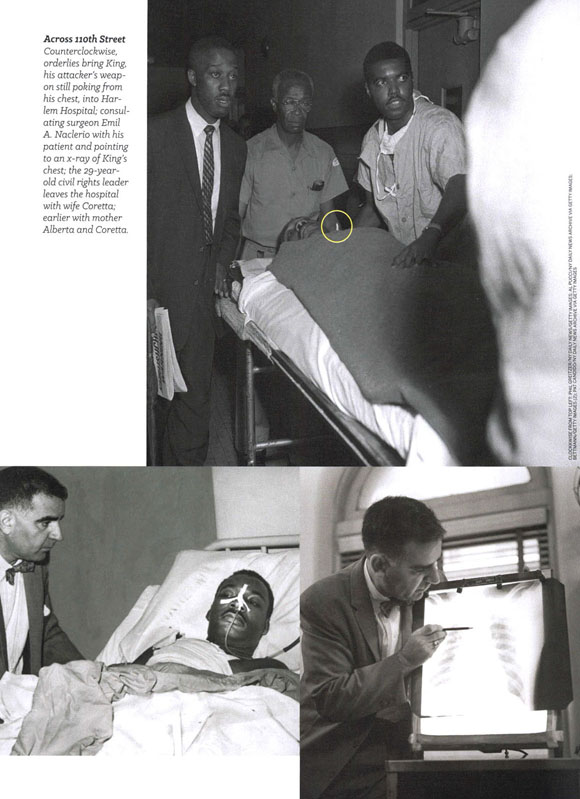 Caption: Handle Me with Care

After the attack, Nettie Carter Jackson, left, tends one of King's lesser wounds. The letter opener's handle is poking from his chest. 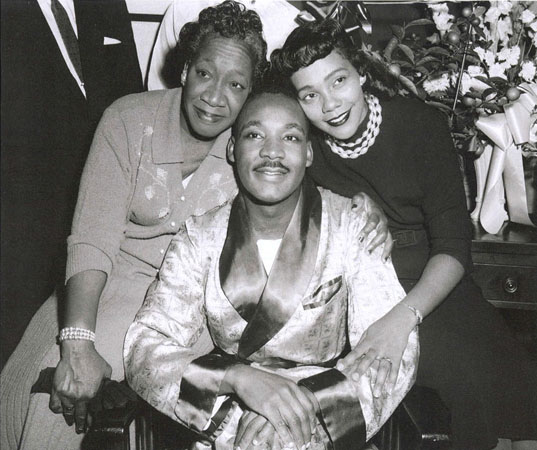 From his Harlem bookstore, Lewis Michaux, below, took King to task as too conciliatory. 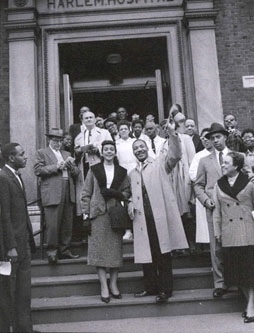 Counterclockwise, orderlies bring King, his attacker's weapon still poking from his chest, into Harlem Hospital; consulting surgeon Emil A. Naclerio with his patient and pointing to an x-ray of King's chest; the 29-year-old civil rights leader leaves the hospital with wife Coretta; earlier with mother Alberta and Coretta.