The Marine Committee of the Second Continental Congress in Philadelphia, Pennsylvania , adopted a resolution on June 14, 1777, stating that the flag of the United States would have thirteen stripes, alternating red and white. (See Continental Congress, Second .) The union would be symbolized with thirteen white stars on a blue field. There was no direction as to how many points each star would have or how they would be arranged. As a result, the first American flags varied in pattern.

Popular legend has it that the first American flag was sewed by a Philadelphia seamstress named Betsy Ross (1752–1836). Ross knew General George Washington (1732–1799), who was the leader of the Continental army at the time. Historians have not been able to verify the Ross story, although it is known that Ross sewed flags for the Pennsylvania navy in 1777. Many various flags were sewn throughout the American Revolution (1775–83), but the flag commonly referred to Page 61  |  Top of Articleas the Betsy Ross flag (with the stars arranged in a circular pattern) did not appear until the early 1790s.

The first unofficial national flag was called the Grand Union Flag or the Continental Colors, and it was raised at the request of Washington near his headquarters outside Boston, Massachusetts , on January 1, 1776. This flag had thirteen alternating red and white horizontal strips and, in the upper left corner, the emblem of the British flag of the time. The first official flag, known as Old Glory or the Stars and Stripes, was approved by the Continental Congress the following year on the day the flag resolution was adopted. The emblem of the British Union Flag was 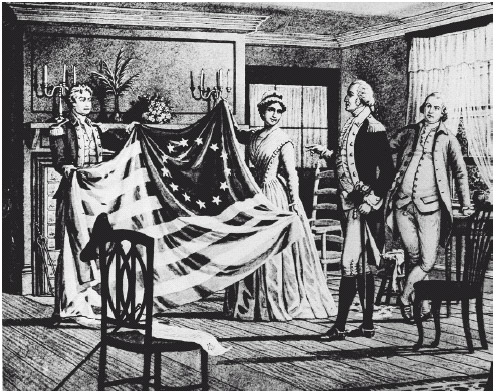 Betsy Ross shows George Washington the first American flag she made in Philadelphia in 1776. A year later, the Continental Congress formally approved the 13-stripe, 13-star flag of red, white, and blue. AP IMAGES

replaced by thirteen white stars on a blue background, representing the thirteen colonies . No one knows with certainty who designed the flag, though many historians believe it was Francis Hopkinson (1737–1791), a member of the Continental Congress and signer of the Declaration of Independence .

In the twenty-first century, the American flag has thirteen horizontal stripes: seven red and six white alternating. The union of fifty states is represented by fifty white, five-pointed stars on a field of blue in the upper left quarter of the flag. President Dwight D. Eisenhower (1890–1969; served 1953–61) gave specific proportional measurements for each facet of the flag in August of 1959.