Women's Participation in the Revolution

Women's Participation in the Revolution

While generations of historians virtually ignored the role of women in the American Revolution, hordes of schoolchildren grew up on the exploits of Molly Pitcher and Betsy Ross. Recent scholarship reveals that the folk wisdom of the elementary school classroom has some merit.

Women played a number of important roles in the American Revolution (1775–1783). The outbreak of protest against British policy in the mid-1760s quickly evolved to include women. Although limited by tradition to roles within the household, women's roles in the household economy combined with an emerging revolutionary consciousness to produce organizations calling themselves the Daughters of Liberty, the female counterpart of the Sons of Liberty. The boycotts of British goods that emerged as part of the colonial strategy to produce a change of policy in Parliament hinged on women's participation. The nonimportation of products such as tea and English fabric could not succeed unless American women provided substitutes. Women displayed their political preferences by eschewing tea in favor of coffee or local herbal teas. More important were the activities of the traditional sewing circles. Long an opportunity for women to gather while producing for the household economy, the boycotts infused these social gatherings with a political purpose. Women's sewing circles, a traditional form of female socializing, became essential to the radical Whig cause because of their ability to replace needed goods with homespun.

The Whig leadership in many colonies recognized their contribution by urging husbands to encourage their wives' efforts, and in some colonies Revolutionary organizations endorsed the boycotts and encouraged both men and women to sign Association manifestos proclaiming their refusal to consume British goods. In some cases women issued their own petitions. Perhaps the most famous of these was dated 25 October 1774, when fifty-one women of Edenton, North Carolina, signed an Association which pledged that "we, the Ladys of Edenton, do hereby solemnly engage not to conform to the Pernicious Custom of Drinking Tea." At the outset of the conflict, Anne Terrel wrote to the Virginia Gazette, exhorting the wives of Continental soldiers to support the war effort through boycotts and prayer as their husbands supported the "glorious cause of liberty."

In some colonies, women went beyond the confines of the sewing circle, participating in riots and mass meetings. This was particularly true for artisan women, whose role in the streets had been established by custom and gender-determined economic practices. Rioting was a traditional Anglo-American form of political protest, and women played an important role in it and in other street activities. After the first shots at Lexington and Concord in 1775, women were important participants in organized protests. Hannah Bostwick McDougall of New York, for example, organized parades in an effort to free her husband from arrest. Other protests took on more violent overtones. This was particularly true of the many food riots led by women during the Revolution. Chronic food shortages caused by wartime conditions led some merchants to horde needed supplies and hike prices. Such efforts were met with active opposition. While many of the food rioters were men, the central role played by women in the household economy of the eighteenth-century American home often placed women in the vanguard of mob protest. Women's participation, clearly shows involvement at the popular level, with women equating fair prices with support for the Revolution. Women's participation was not isolated to popular street protest. Elite women also supported the cause. In 1780 Elizabeth DeBerdt Reed, a member of the Philadelphia elite, and Sarah Franklin Bache, daughter of Benjamin Franklin, organized a women's fundraising organization for the Whig cause. George Washington responded to the organization by requesting that instead of providing money for his soldiers, women produce clothing for them. They responded with over two thousand linen shirts by the end of 1780.

WOMEN IN THE ARMY

Women directly supported the war through service in the army. Although women posing as men violated both law and custom in eighteenth-century America, a number of women secretly ignored this taboo and fought with Revolutionary forces. Deborah Sampson (or Samson) was among the most famous 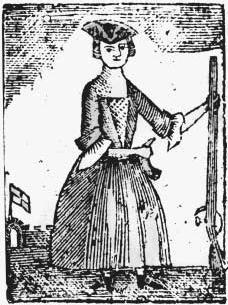 A Continental Soldier. Thousands of women accompanied the Continental Army as cooks, laundresses, nurses, and guides. This 1779 woodcut shows an American women armed for battle during the Revolution. THE GRANGER COLLECTION, NEW YORK.

women who saw combat. Assuming the name Robert Shurtliff in 1782, Sampson served in a light infantry unit of the Continental Army during the waning months of the war, suffering two wounds before her honorable discharge in 1783. Most women served the military in conventional ways that did not violate standard gender roles. Both the British and American armies had substantial complements of women in their ranks. Women performed many of those tasks considered outside of men's domain, laundering and mending clothing, preparing food, nursing the sick and wounded, and even bringing supplies to soldiers during combat. Such were the circumstances that led Mary Hayes to become known as Molly Pitcher following the Battle of Monmouth (1778) in New Jersey. The essential role that women played in supporting the soldiers eventually led Washington to set an unofficial quota of one woman for every fifteen soldiers in Continental Army regiments. Such "women of the regiment" drew regular rations (any children they brought drew half rations) and were subject to military discipline. In the southern theater of operations, the British employed substantial numbers of African American women, who served in virtually every department of the army. Additional women traveled with the Continental force in unofficial capacities. The wives of officers, enlisted men, and refugees often accompanied the force during campaigns.

Many women were caught between the two sides during the conflict. The destruction of property occasioned by the war left many women destitute and homeless. Perhaps typical was the treatment described by South Carolinian Eliza Wilkinson. She feared the worst with the approach of British cavalry, and indeed the soldiers ransacked her home, looting every thing of value. While most armies fighting in the Revolutionary campaigns respected certain rules of war, violence and rape were not uncommon occurrences. Such risks led many women to flee at the news of an approaching enemy army.

Loyalist women were subject to much the same treatment. Continental forces practiced systematic destruction of property and rape of Native American women during their campaigns against the Iroquois in upstate New York. Loyalist women lacked the organizational structures that helped to unify their Whig sisters, and the former often found themselves abandoned by their husbands or stripped of property. In some instances, Whig legislatures passed legislation to strip Loyalists of their property. Women's status was further complicated when husbands and wives took different sides during the Revolution. Due to laws of coverture, under which the wife was "covered" or legally subordinate to her husband, wives often discovered that they had no legal claim to property in the event of abandonment by a spouse.

A NEW STATUS FOR WOMEN?

Women embraced the concepts of Whig liberty from the earliest stages of the Revolution, but these views were filtered through uniquely feminine lenses. Membership in organizations such as the Daughters of Liberty and participation in boycotts had fostered a sense of virtuous sacrifice on behalf of the cause. Prior to the war, women's perspectives on Revolutionary ideology were scarce. Although Mercy Otis Warren published fictional satires of British officials before the war, they did not reveal a specifically female viewpoint. But during the conflict American women were clearly expressing their own distinct conceptions of liberty. Nowhere was this clearer than in the 1780 manifesto, Sentiments of an American

The Birth of the Flag (1912). Elizabeth "Betsy" Ross, shown here in a painting by Henry Mosler, was operating a Philadelphia upholstery shop with her husband when he died in 1776 guarding an American weapons cache. The Continental Congress later asked the young widow to design a flag. © BETTMANN/CORBIS.

Woman, which called upon women to support the quest for liberty through boycotts, household production, support for the troops, and virtuous selfsacrifice. In many ways, Sentiments captured the dilemma of the American Revolution as it applied to women; prevailing gender roles limited them to the position of helpmate in the struggle for liberty. Many women recognized this conundrum and sought greater rights for their gender. But aside from the extension of the franchise to New Jersey female heads of household in 1776 (a right revoked when universal manhood suffrage was granted in 1807), real political gains were few and far between. Despite efforts by Abigail Adams and Judith Sargent Murray to advance women's liberties, the women's revolution generally stopped at the door of their household. Despite the limited changes in political status, the Revolution did produce some changes in legal status. Women gained greater independence from husbands, greater access to and ability to control property, and greater availability of divorce. The struggle for women's liberty did not end with the American Revolution; it was only beginning.

Hoffman, Ronald, and Peter J. Albert, eds. Women in the Age of the American Revolution. Charlottesville: University Press of Virginia, 1989.