The hippies did not pick that name for themselves: it was given to them by Michael Fallon, a reporter for the San Francisco Examiner, in a 1965 story about the new bohemian lifestyle that was developing in the city's Haight-Ashbury district (named for two streets that converge there—also called the Haight). Fallon got the name by shortening Norman Mailer's term hipster, and he applied it to the second generation of beatniks who had moved into the Haight from nearby North Beach. This new generation of drop-outs was more optimistic than the beatniks, however, more prone to talk about love, more flamboyant. They belonged to groups such as the Legalized Marijuana Movement and the Sexual Freedom League. In the summer of 1965 the hippies were few in number but were well on their way to creating a small, thriving society—a counterculture. 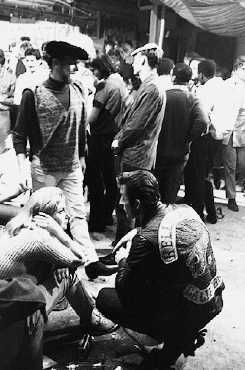 A member of the Hell's Angeles talks to a girl at the Merry Pranksters' Acid Test Graduation in San Francisco, California, where many people were high on LSD. © Corbis-Bettmann. 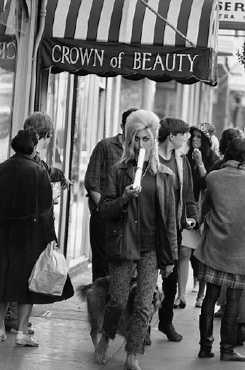 Imagine a beautiful suntan without ever going in the sun. This was a big hit with people in the colder parts of the country in 1960, when artificial tanning cream was marketed. It was sold under such names as Man-Tan, Rapid Tan, Positan, Magic Tan, Tansation, Tanfastic, and even Tan-O-Rama.

Tan-in-a-bottle was really a bit of a technological breakthrough. The active ingredient was dihydroxyacetone. This colorless chemical was made years before, but had limited uses. In fact, it caused problems for chemists. People who came in contact with it got brown stains on their skin.

The man behind the idea was John Andre, President of the New York mail order firm Drug Research, Inc. He added alcohol and perfume to dihydroxyacetone to produce an aftershave, Man-Tan. Response by the public was tremendous, with about $15 million spent on the product in the first year. But Andre feared the big Coppertone Corporation, who came out with competing QT (for Quick Tan).

Man-Tan required three applications twenty minutes apart, or it left a splotchy mess. Hands that applied it had to be washed thoroughly or they would turn dark brown. Shirt collars tended to stain badly, and there were plenty of cases of skin irritation.

The GH Bureau Good Housekeeping Magazine did an investigation of the product, and results did not justify the tremendous amount spent on the product. Half the women who tried it were dissatisfied.

Without a sunscreen people could burn badly while wearing tan-in-a-bottle in the sun. The twenty-five women who volunteered to test the product applied it as directed. They noted streaks and blotches in the folds of the knees and elbows, uneven coloring, and blotches like iodine leaves. Raised warts and moles darkened more than other skin areas. While no difference was found in the eleven products tested, prices ranged from 20 to 87 cents per ounce. Weekly needs were six to eight ounces to keep the tan. Wool fabric stained (but cotton did not) if the tanning agent was applied to the cloth itself. The conclusion was you could look dirty, but not tan, by using these products.

The Growth of a Counterculture

The hippie lifestyle, which included the use of such drugs as marijuana and LSD, drew thousands of young Americans to California in the mid 1960s. By June 1966 some fifteen thousand had moved into the Haight. That was the year that the largest generation of Americans ever—the baby boomers—reached ages eighteen through twenty. Most of these young Americans joined the workforce, married, or went to college and prepared for a career. But an increasing number of their contemporaries were chafing under the pressure to conform that had dominated the 1950s. A growing chorus of voices was exposing the inadequacies of the Establishment and encouraging the alienated to (in the words of Timothy Leary) "Turn on, tune in, drop out." To the young people living in the Haight, they were rapidly becoming an example to the rest of the country of a community formed without greed, loneliness, or any of the other anxieties of modern society. Eastern mysticism, astrology, the novels of German writer Herman Hesse, and science-fiction utopias such as the one in Robert Heinlein's Stranger in a Strange Land formed the basis of the hippie philosophy. 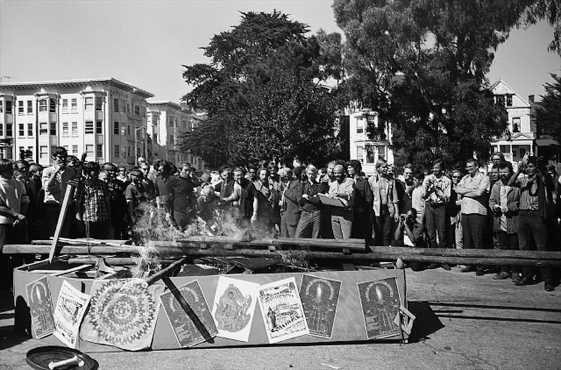 Hippies in the Haigh Ashbury district of San Francisco, California, stage a funeral of themselves using a cardboard coffin in an effort to spread their pure hippie message to the country. © Corbis-Bettmann.

As the population of the Haight grew, bookshops, craft stores, head shops, coffee shops, health-food stores, and other businesses catering to the young crowd opened throughout the neighborhood. The most important of these was the Psychedelic Shop, which was devoted to books on drugs and exotic religions, crafts, records, and clothes, but also served as a hangout, information center, and post office for some of the citizens of the Haight (whose addresses often changed weekly). Local hands performed at several new night-spots, including the Fillmore and Avalon Ballroom, which featured such soon-to-be famous bands such as the Grateful Dead, Big Brother and the Holding Company, and Jefferson Airplane. An atmosphere of sharing and easy living dominated the neighborhood, which was necessary, since few of the hippies had steady jobs.

In late 1966 a secretive group called the Diggers appointed themselves the conscience of the Haight community and began issuing fliers encouraging the hippies to take a more active stand against the society from which they dropped out. They accused the merchants of the Haight of profiting from the counterculture in the best capitalist tradition. They soon began offering free food daily: "It's free because it's yours!" their fliers proclaimed. Nearly a hundred people began attending the Digger Feeds, which offered a menu of slightly wilted vegetables, day-old bread, turkey neck stew, and whatever other food the Diggers could hustle. On Halloween 1966 the Diggers disrupted traffic at a San Francisco intersection with a street puppet show. Local merchants, meanwhile, began considering a job cooperative for the growing crowd of jobless newcomers that were showing up on Haight Street. The Diggers also started the Free Frame, where people could find free clothes and household items. In December 1966 the Diggers led hundreds of costumed marchers in a Death of Money parade.

Some of the most unlikely participants in the counterculture movement of the 1960s were the Hell's Angels, the large gang of outlaw motorcyclists that had roamed California's highways since the late 1940s. They were introduced to the youth scene in 1965 by author Ken Kesey and his Merry Pranksters, who thought that they could mellow the Angels out with their favorite drug, LSD. At the Pranksters' ranch in Palo Alto, California, what Newsweek described as a "bizarre and foolish alliance" was formed. For the next several years, the Angels provided security for the large parties and rock concerts that were part of the California hippie lifestyle. The Pranksters thought that the Angels were perfect for the job: they were dirty, mean, and an affront to mainstream sensibilities. Best of all, they worked cheap, accepting beer and drugs as payment for their services.

The relationship was destined to come to a bad end, however. The Angels were violent thugs who actually shared few of the values of the youth movement. They supported the Vietnam War: Sonny Barger, the president of the group, tried to contact President Lyndon Johnson to offer the Angels' services for "behind the lines duty" in Southeast Asia. Their weekend gatherings at different spots around the West Coast had become notorious sites of violence and rape. But the final tragic act that caused the break between the hippies and the Hell's Angels occurred at the Altamont speedway in December 1969. The Angels were working security at a free concert by the Rolling Stones, and when one of the concertgoers kicked an Angel's bike, the concert's security staff turned on the crowd. Fifty Angels beat dozens of unarmed young people with pool cues, and an eighteen-year-old African-American man, Meredith Hunter, was stabbed to death by one of the gang members. The entire incident was recorded on film by Albert and David Maysles, filmmakers who were shooting part of a documentary on the Rolling Stones' American tour, which was released as Gimme Shelter in 1971.

The Death of Hippie

The climax of the hippie movement was the Summer of Love, also called the Gathering of Tribes for the Human Be-In, in 1967. Tens of thousands of mostly homeless young people came to the Haight over a period of a few months. The atmosphere actually was not very loving: the sidewalks were too crowded for anyone to get anywhere; the drug scene had become seedier and more dangerous; police were cracking down more aggressively on the neighborhood; and racial tensions, as was the case over the rest of the nation, threatened to explode into violence. Still, hippies were making a big impression on the popular imagination, thanks to hit songs such as the Jefferson Airplane's "Somebody to Love" and Scott Kendricks's "San Francisco (Be Sure to Wear Flowers in Your Hair)" and movies such as The Love-ins. Even car commercials had worked groovy into their vocabulary. Realizing that their dream had gone sour, the citizens of the Haight held a Death of Hippie service in October of that year, marching down Haight Street at sunrise with a cardboard coffin. It was time to fan out from San Francisco, they felt, taking the pure hippie message to the rest of the country.