In the 1830s and 1840s, the western artist George Catlin inaugurated Wild West shows by displaying Plains Indians in the United States, the British Isles, and France. However, this form of entertainment did not become a major cultural phenomenon until the late nineteenth century, when Americans and Europeans became intrigued with the rapidly disappearing Plains frontier. Westerners carved their niche in outdoor entertainment by designating the frontier movement as the most important Page 419  |  Top of Article accomplishment in American history, and by forming shows that celebrated this achievement with programs combining history, patriotism, and adventure. Authentic Plains people, animals, and depictions of events involved in the winning of the West enhanced the appeal of shows.

Spectators enjoyed the dash and color of the shows, and the portrayal of a simple, romantic world in which heroic people on horseback enjoyed untrammeled freedom, quickly eliminated evil, and ensured the success of the "American" way. Vocal audiences exerted considerable influence on the direction and content of the shows. By cheering most loudly for vignettes showcasing colorful characters, adventure, and conflict on the Plains, these audiences helped define the concept of the "Wild West," a collaboratively crafted vision where Westerners instructed Easterners and Europeans but developed acts with an eye to satisfying audience expectations. Many elements of the performances remained the same, but the shows evolved over time to satisfy the ever-changing expectations of viewers.

William F. "Buffalo Bill" Cody dominated the genre, and accurately gauged the changing moods at home and in Europe. He entered the Wild West show business in 1883, and quickly established its Western format. These shows celebrated horses and those who rode them in acts featuring races and bucking broncos. Sharpshooting, from horseback and from the ground, was always a part of the programs. Spectacles combined shooting and horseman-ship in acts, such as one in which Indians attacked a settler's cabin and a band of cowboys brandishing sixshooters arrived just in time to save the family. Another spectacle, the rescue of the Deadwood stagecoach, featured hard-riding, gun-wielding cowboys dispatching Indians or bandits.

An international phase in the show extended from 1887 to 1893, when Buffalo Bill's Wild West show visited Queen Victoria's Golden Jubilee in London, and then moved to France, Spain, Italy, Austria, and Germany, before returning to the Columbian Exposition in Chicago in 1893. During this time, Cody and the show's publicists polished the image of performers—cowboys, in particular—in a way that retained their American vigor but made them less violent, more knightly and gentlemanly, and thereby more acceptable to Europeans. By camping out-of-doors in Europe, these Americans self-consciously played the role of innocent children of nature rejuvenated by contact with nature. This depiction elevated the image of all in the show, but the cowboy image benefited most; from that point forward, the cowboy became an American icon. At the Columbian Exposition, Buffalo Bill's Wild West show reassured Americans that the United States could move confidently into the future because of core values developed on the frontier. By this time, the show contained a "Congress of Rough Riders" that included military units from the great powers of the world and exotic equestrians, such as Cossacks and gauchos. After 1893, Buffalo Bill celebrated militarism and imperialism along with all things western. Before Cody died in 1917, he was encouraging "preparedness" for America's entry into World War I.

The success of Buffalo Bill's show inspired many imitators and competitors. A perusal of the 116 shows listed in Don B. Russell's "Checklist of Wild West Shows" in The Wild West (pp. 121–127) indicates that from 1883 to 1900 there were perhaps twenty other entertainments, often run by men with flamboyant names, such as Dr. W. Page 420  |  Top of Article 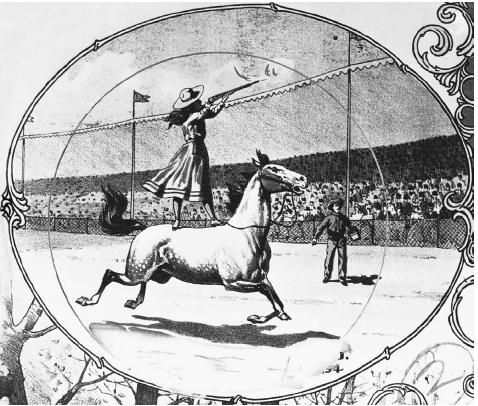 Annie Oakley. Annie Oakley, whose real name was Phoebe Ann Moses, joined Buffalo Bill's Wild West Show in 1884 as a trick shooter known as "Little Sure Shot." In this early illustration from the show, Oakley shoots a rifle while standing on a bareback horse. © Corbis F. Carver, or "Evil Spirit of the Plains," Pawnee Bill (both partners of Buffalo Bill for a time), Buckskin Joe, and Mexican Joe. From 1900 to 1920 the shows proliferated to over fifty, although many were small, circuslike affairs, such as Buckskin Ben's Wild West and Dog and Pony Show, and Indian Bill's Wild West and Cole and Rogers Circus combined. The celebrated outlaws Cole Younger and Frank James tried the business in 1903 and 1908. The Miller Brothers 101 Ranch Show (the employer of Buffalo Bill, 1916–1917) was the largest show to emerge (1907), and continued, with an interruption for World War I, until the Great Depression. From 1920 to 1940, approximately twenty Wild West shows existed, sometimes headed by movie stars such as Tom Mix, Tim McCoy, and Ken Maynard. After 1940, only a handful of shows appeared, but some included luminaries, such as Gene Autry's Flying A Ranch Stampede. Women occasionally ran Wild West shows, as evidenced by such names as Luella Forepaugh-Fish Wild West and the Kemp Sisters Wild West.

The Decline and Significance of Wild West Shows

Wild West shows declined because they fit most comfortably into the late nineteenth and early twentieth centuries, when crowds flocked to tented entertainments and the end of the frontier concerned Americans. But Wild West shows also failed because they had succeeded so well that other forms of entertainment appropriated aspects of their programs. Wild West show performers, such as Tom Mix, transferred the genre's action, horse-manship, and sharpshooting to movies. In addition, rodeos became popular, powwows showcased Native American customs, and dude ranches and trail rides made the Wild West lifestyle available to anyone willing to pay for the experience.

The legacy of Wild West shows remains firmly ensconced in American culture, and in its sport and leisure. Wild West still designates a mythical and uniquely American place populated with lean and hardened men and women engaged in vigorous outdoor activities. Wild West shows introduced rodeo as a spectator sport, and those who saw cowboys and cowgirls such as Lucille Mulhall and Lulu Parr ride bucking broncos saw them as superior athletes. Spectators who saw Annie Oakley and Johnnie Baker shoot regarded guns as "American." Wild West shows stressed that the transcendent inner qualities of westerners matched their physical accomplishments, and that contact with nature sustained them. This attitude exists in contemporary America, and helps popularize camping, hunting, and other outdoor activities.

Wild West shows helped define "American," and they established a national mythology that enriched the nation's leisure activities. As such, these shows are a vital component in studying America's leisure, social, and sports histories.