SEGREGATION. The practice of segregating people by race and gender has taken two forms. De jure segregation is separation enforced by law, while de facto segregation occurs when widespread individual preferences, sometimes backed up with private pressure, lead to separation. De jure racial segregation was a practice designed to perpetuate racial subordination; de facto segregation of African Americans had similar effects, but sometimes could be defended as a result simply of private choice, itself an important American value. Separation of men and women occurred primarily in the workplace and in education. It contributed to the subordinate status of women, but less directly than racial segregation contributed to racial hierarchy.

Racial segregation as such was not a significant social practice before slavery was abolished because slavery itself was a system of subordination. Some northern states prohibited the immigration of free African Americans, reflecting the near-universal desire among whites to live apart from African Americans who would be socially and politically equal. In some northern cities, African Americans tended to live in neighborhoods that were racially identifiable, but de jure segregation was rare because it was unnecessary; there were few public programs of any sort that might be segregated, and de facto segregation produced the same results that de jure segregation would have. The city of Boston maintained a segregated school system from the beginning of the nineteenth century, and in 1845 the state supreme court found that doing so did not violate the state constitution's guarantee of equal liberty, but the state outlawed segregation in public schools in 1855. De facto segregation in railroads and steamboats was common. The practice of taking land from Indians and forcing them to live on reservations was a type of segregation enforced by law, although the U.S. Supreme Court's treatment of Indian tribes as semi-sovereign nations lent a certain theoretical sense to separating Indians and whites into different territories.

The Emergence of Southern Racial Segregation

Slavery's abolition meant that racial subordination could persist only with new kinds of support. Informal practices of racial segregation soon sprang up throughout the South, particularly in railroads and other places generally open to the public. In response, Congress enacted the Civil Rights Act of 1875, which made discrimination in places of public accommodation illegal. The Supreme Court held the act unconstitutional in the Civil Rights Cases (1883), concluding that the Fourteenth Amendment, which prohibited states from denying equal protection of the law, did not authorize Congress to adopt laws dealing with private discrimination.

After Reconstruction, whites sought to reinforce patterns of racial hierarchy. Many southern states adopted laws expressly requiring racial segregation in transportation, schools, and elsewhere. The Supreme Court upheld such laws in Plessy v. Ferguson (1896), arguing that the Fourteenth Amendment prohibited discrimination only in connection with civil and political rights but not in connection with social rights such as were involved in education and transportation. The Court's doctrine indicated that states could require racial segregation only if the facilities provided the races were actually equal, but no state took the requirement of equality seriously, and the segregated schools and railroad cars available to African Americans were, typically, substantially worse than those available to whites. The Supreme Court's approval of segregation spurred southern legislatures to extend the Jim Crow system much more substantially to include separate seating in courtrooms; separate water fountains from which to drink; separate Bibles for swearing oaths in court; and separate swimming pools, parks, and golf courses.

African Americans continually mounted legal challenges to segregation, focusing at first on the inequality of facilities. Eventually, in Brown v. Board of Education of Topeka (1954), the Supreme Court became convinced that separate facilities could never be equal. As the social importance of de jure segregation declined with the repeal or invalidation of statutes specifically discriminating on the basis of race, the importance of de facto segregation increased. Migration of African Americans from the rural South to urban areas in the South and North led to significant increases in residential segregation, and—in a society where children went to their neighborhood schools—to de facto segregation in education.

Sometimes residential segregation was reinforced by law. In Buchanan v. Warley (1917), the Supreme Court held unconstitutional ordinances that effectively required residential segregation. In response, real estate agents and private developers began to include provisions, called restrictive covenants, in contracts for the purchase of housing that barred resale to purchasers of a race different from that of the homeowner. The Supreme Court eventually, in Shelley v. Kraemer (1948), held restrictive covenants unconstitutional, but not before patterns of residential segregation had become entrenched. National housing policy from the 1930s through the 1950s also reinforced residential segregation, as federal housing authorities required developers to include restrictive covenants and supported decisions by local housing authorities to segregate the buildings they owned. When combined with differences in the wealth of African Americans and whites, these policies helped create urban ghettoes in which African Americans and, in some parts of the country, Hispanic Americans were concentrated.

Some antidiscrimination laws enacted in the 1960s provided the legal basis for challenging de facto segregation, but in general such attacks failed. Legislatures and courts regarded de facto segregation as resulting from private choices by people with different amounts of money to spend on housing, and therefore as less morally questionable than de jure segregation. The Supreme Court held that only de jure segregation violated the Constitution. By the early 1970s, Justice William O. Douglas, a liberal, and Justice Lewis F. Powell, a moderate conservative, urged their colleagues to abandon the distinction between de jure and de facto discrimination. The Court never did, however, in part because liberals were concerned that the courts could not successfully take on the challenge of eliminating de facto segregation, while conservatives were concerned that the courts would try to do so. 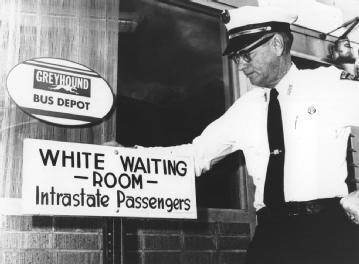 White Waiting Room. The police chief of McComb, Miss., looks at a sign aimed at passengers within the state, posted at the town's Greyhound Bus Depot, in 1961. AP/WIDE WORLD PHOTOS

Separation of men and women was also common. Often influenced by labor unions and early feminists, state legislatures adopted what were known as protective labor laws, barring women from particular occupations regarded as inappropriate for women, or restricting the hours women could work while leaving untouched employers' ability to contract with men for longer hours. In Muller v. Oregon (1908), the Supreme Court upheld a state law limiting the hours women could work, noting the extensive information about workplace safety submitted by public advocate Louis Brandeis. In Goesaert v. Cleary (1948), the Court upheld a law barring women from working as bartenders, except when their husbands owned the bars. Sincerely defended as being in the best interests of women who would become ill if they worked long hours, or morally degraded if they worked in certain occupations, the protective labor laws rested on assumptions about women's proper role that were part of a system of gender hierarchy.

The creation of separate educational institutions for girls and women had even more complex effects on the gender system. Women typically took different courses than men did, specializing in subjects that were thought particularly suitable for women who would be running households and caring for others, including children. Separate educational institutions, however, also provided women students a space within which they could develop free from competition with men, and their instructors gave women students models of intellectually engaged mature women whom the students could emulate.

The Civil Rights Act of 1964, banning workplace discrimination based on sex, led courts to invalidate protective labor laws and employer work rules that had the effect of creating different departments for men and women. The feminist movement of the mid-twentieth century discredited the assumptions on which protective legislation rested and began to undermine the assumptions that had justified separate educational institutions for girls and women. From the 1960s on, colleges that had been segregated by gender voluntarily abandoned the practice, leaving only a handful of private colleges that admitted only men or only women. In United States v. Virginia (1996), the Supreme Court held unconstitutional the exclusion of women from the Virginia Military Institute, one of the remaining state-run schools that did so—although the Court's opinion suggested that separate education for women might have more justification than did schools for men only.

In the 1990s, a minor flurry of interest arose in the creation of public schools for young African American men, which would have revived a form of de jure racial segregation. No such schools were created, largely because the nation's commitment against de jure racial segregation was so strong. Voluntary programs of racial separation, inPage 304  |  Top of Article the form of separate dormitories for African Americans at private colleges, had somewhat more support, and defenders of separate educational institutions for women and separate sports programs for men and women could be found even more easily. The different ways that de jure and de facto segregation contribute to creating racial and gender hierarchy seem to account for the stronger opposition to de jure than to de facto segregation, with de jure segregation expressing more clearly a social preference for hierarchy.

Kerber, Linda. No Constitutional Right to Be Ladies: Women and the Obligations of Citizenship. New York: Hill and Wang, 1998.

Kousser, J. Morgan. "'The Supremacy of Equal Rights': The Struggle Against Racial Discrimination in Antebellum Massachusetts and the Foundations of the Fourteenth Amendment." Northwestern University Law Review 82 (Summer 1988): 941–1010.