The Depression did little to alter the role of women in the American workplace. According to the 1930 census almost eleven million women, or 24.3 percent of all women in the country, were gainfully employed. Three out of every ten of these working women were in domestic or personal service. Of professional women three-quarters were schoolteachers or nurses. The 1940 census did not post dramatic changes in the numbers of working women: thirteen million women, or 25.4 percent of all women over the age of fourteen, worked. The greatest numbers of women continued to work in domestic service, with clerical workers just behind. Out of every ten women workers in 1940, three were in clerical or sales work, two were in factories, two in domestic service, one was a professional—a teacher or a nurse—and one was a service worker. Women in the 1930s in fact entered the workforce at a rate twice that of men—primarily because employers were willing to hire them at reduced wages. In unionized industries, however, women fared better. Women constituted 7 percent of all workers in the automobile industry and 25 percent of all workers in the electrical industry. The integrated International Ladies Garment Workers Union had 200,000 members and secured for pressers in Harlem high wages of $45 to $50 per week.

Such pay was exceptional. For the most part women worked long hours for low wages in the 1930s. More than half of all employed women worked for more than fifty hours a week, and more than one-fifth worked for more than fifty-five hours. According to the Social Security Administration, women's average annual pay in 1937 was $525, compared with $1,027 for men. The Depression caused women's wages to drop even lower, so that many working women 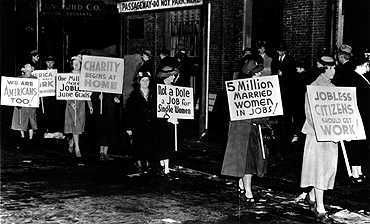 Protestors from the Women's Political Club of Boston picket against the employment of married women in public service jobs. © Corbis-Bettmann. could not meet basic expenses. Certain industries such as canning, textiles, candy, and meatpacking gladly hired women at reduced wages. Added to these poor working conditions and low wages, women who worked faced social criticism in the 1930s, since they were believed to be taking jobs away from men. In most cases of the replacement of men by women, however, women were doing work at wages most men would not accept.

Work and the Married Woman

Married women who worked faced particular hostility. A 1936 poll in Fortune magazine asked, "Do you believe that married women should have a full time job outside the home?" Only 15 percent of the respondents approved, while 48 percent disapproved, with the remaining 37 percent giving it conditional approval. Common arguments against married women working were that they were taking jobs away from men, that the woman's place was in the home, and that children needed a mother at home full time. Both private companies and the government dismissed large numbers of married women and made it difficult for married women to get high-paying professional or clerical jobs. Section 213 of the 1932 Federal Economy Act prohibited more than one family member from working for the government, barring many married women from federal employment. Even positions that were traditionally held by women, such as teacher and librarian, were affected. In 1930, 81 percent of teachers had been women; in 1940, 76 percent were women; the percentage of women librarians fell from 91 in 1930 to 86 in 1940. Despite these restrictions, the Depression pushed many married women into the workforce. Married women sought jobs out of economic necessity, when their husbands lost their jobs, or when the husbands' wages were too low to support their families. The percentage of married women who worked rose from 11.7 in 1930 to 15.2 in 1940.

New Deal legislation provided relief to both male and female workers in need, although women often did not receive their full share of benefits. For example, in 1933 the National Recovery Administration (NRA) designed codes that improved women's wages, shortened their hours, and increased the number of women employed. But NRA codes did little for the two million women who lost their jobs and sought relief. Nor did most New Deal public works projects provide much assistance for women. The Civil Works Administration (CWA) employed four million people in large-scale construction projects in January 1934. These projects were defined as unsuitable for women, and the CWA employed only 300,000 women. Starting in 1935, the Works Progress Administration (WPA) oversaw federal relief projects. While the WPA launched successful projects for women, notably sewing rooms where women repaired old garments, women had difficulty getting such jobs. Only one member of a household was eligible to qualify for a relief job, and women had to prove themselves economic heads of households. Women with physically able husbands could not qualify, since men were considered heads of households, even if they were unable to find jobs.

The 1930s have been called a "golden age for spinsters." In the 1920s and the 1930s some women, especially college-educated women, chose to remain single. These women expected to find spiritual and emotional—perhaps sexual—fulfillment from other women. The decision to remain single was often part of a commitment to a career in social reform, academic life, or a profession. In spite of the discrimination women faced in the tight labor market, the Depression provided opportunities for these young women to become self-reliant. Their experiences of economic independence inhibited their desires to hurry into the dependency of marriage. As one women from Providence, Rhode Island, explained, "It's not that I didn't want to get married, but when you are working and have your own money.…" The Depression also created a scarcity of men financially able to marry and led to many broken engagements. Another woman explained that she did not choose to remain single, but her obligations to her family came first: "During all the years I worked, I had a boyfriend, but we both had responsibilities at home.… Now they say 'career woman/ but at the time you wouldn't call yourself that. It's just because you felt you had a responsibility at home too." Whether committed to lives with other women, or inspired by their experience of economic independence, more than six million single women supported themselves or contributed to their parents' households in the 1930s.

Though some historians have argued that "feminism died" during the Depression, the economic emergency of the 1930s led to substantial political gains for women. The expansion of social welfare services in the New Deal, a field dominated by women, led to the appointment of more women in high government positions than ever before. As feminists, these women used their government posts to work on behalf of other women. New Deal politician Molly Dewson observed, "The change from women's status in government before Roosevelt is unbelievable." Prominent women appointed by Roosevelt included Frances Perkins, secretary of labor; Ellen Sullivan Woodward, head of the Women's and Professional Projects for the Works Progress Administration; Josephine Roche, assistant secretary of the treasury; and Lucille Forster McMillin, civil service commissioner. These and other appointments marked firsts for women: the first cabinet member, the first director of the mint, first woman ambassador, first judge on the Court of Appeals.

In the spring of 1935 the country was caught up in a get-rich-quick scheme that enraged mail carriers and postal officials. The chain-letter craze clogged post offices, burdened letter carriers, and dominated public conversation. The chain letter featured a list of six names. Recipients of a letter were asked to send a dime to the person at the top of the list, scratch that name out, add their own at the bottom, and send the letter on to five friends. Presumably, after five such progressions, the individual's name would reach the top of the list, and they would be deluged with 15,625 dimes—$1,562.50—no small sum during the Depression. Of course, if anyone broke the chain, the payoff became uncertain, and while the basic premise was preposterous, millions of Americans participated in the scheme. Post offices had to hire extra help to process the flood of mail. Racketeers—dubbed "chainsters" by the press—sent off hundreds of letters with their name heading each list. Banks ran out of dimes. President and Mrs. Roosevelt received hundreds of such letters, as did the president's political opponent, Al Smith. The town of Springfield, Missouri, was virtually shut down for two days as its citizens went into a frenzy over the chain mail, but by summer the craze was over, with mail officials cracking down on the practice and occasionally fining malefactors.

Several factors led to these gains for women in the New Deal. First, government organizations and bureaucracies in the area of social welfare were expanding, and women's opportunities are greatest when organizations are in their formative stage. Second, Eleanor Roosevelt, called "the conscience of the country," crusaded for disadvantaged Americans and promoted women's issues as well. She worked to increase the number of women in high government posts. Franklin Roosevelt himself gained experience working with talented women, many of whom he met through Eleanor, and recognized the importance of women to the future of the Democratic Party. Finally, feminist political activist Molly Dewson, head of the Women's Division of the Democratic National Committee, worked effectively for women in politics. Dewson was a close friend of the Roosevelts, and a dynamic politician. She used her position to increase women's roles in the Democratic Party and to promote major appointments for women under the New Deal