Brown v. Board of Education was a landmark U.S. Supreme Court decision in 1954 that struck down the “separate but equal” doctrine that had long served as the rationale for racial segregation in American schools. Ruling unanimously that segregation in public schools violated the Fourteenth Amendment's equal protection clause, which requires states to treat citizens equally before

PRIMARY SOURCE: EXCERPT FROM THE OPINION OF THE SUPREME COURT ON BROWN V. BOARD OF EDUCATION

The doctrine of “separate but equal” did not make its appearance in this Court until 1896 in the case of Plessy v. Ferguson, supra, involving not education but transportation. American courts have since labored with the doctrine for over half a century.

Today, education is perhaps the most important function of state and local governments. Compulsory school attendance laws and the great expenditures for education both demonstrate our recognition of the importance of education to our democratic society. It is required in the performance of our most basic public responsibilities, even service in the armed forces. It is the very foundation of good citizenship. Today it is a principal instrument in awakening the child to cultural values, in preparing him for later professional training, and in helping him to adjust normally to his environment. In these days, it is doubtful that any child may reasonably be expected to succeed in life if he is denied the opportunity of an education. Such an opportunity, where the state has undertaken to provide it, is a right which must be made available to all on equal terms.

We come then to the question presented: Does segregation of children in public schools solely on the basis of race, even though the physical facilities and other “tangible” factors may be equal, deprive the children of the minority group of equal educational opportunities? We believe that it does.

The effect of this separation on their educational opportunities was well stated by a finding in the Kansas case by a court which nevertheless felt compelled to rule against the Negro plaintiffs:

“Segregation of white and colored children in public schools has a detrimental effect upon the colored children. The impact is greater when it has the sanction of the law, for the policy of separating the races is usually interpreted as denoting the inferiority of the negro group. A sense of inferiority affects the motivation of a child to learn. Segregation with the sanction of law, therefore, has a tendency to [retard] the educational and mental development of negro children and to deprive them of some of the benefits they would receive in a racial[ly] integrated school system.”

We conclude that, in the field of public education, the doctrine of “separate but equal” has no place. Separate educational facilities are inherently unequal. Therefore, we hold that the plaintiffs and others similarly situated for whom the actions have been brought are, by reason of the segregation complained of, deprived of the equal protection of the laws guaranteed by the Fourteenth Amendment. This disposition makes unnecessary any discussion whether such segregation also violates the Due Process Clause of the Fourteenth Amendment.

the law, the court ordered schools to be integrated “with all deliberate speed.” Although many school districts, especially in the Southern states, initially defied this order, the court's ruling provided the legal foundation for efforts during the civil rights movement to forcibly end racial segregation and discrimination. Thus, Brown v. Board of Education was an important catalyst for the long and ongoing process of achieving legal, social, and economic equality for African Americans. As they were gradually granted greater access to quality public education and other public services and benefits, African Americans were increasingly able to achieve equality in accumulating human capital (social, personal, and educational attributes that contribute to a person'slabor value), which in turn led to increases in wages and economic opportunity.

The process of establishing social, economic, and legal equality for African Americans began in 1868 with passage of the Fourteenth Amendment to the Constitution, which declared that “no state shall make or enforce any law which shall abridge the privileges or immunities of citizens of the United States; nor shall any state deprive any person of life, liberty, or property, without due process of law; nor deny to any person within its 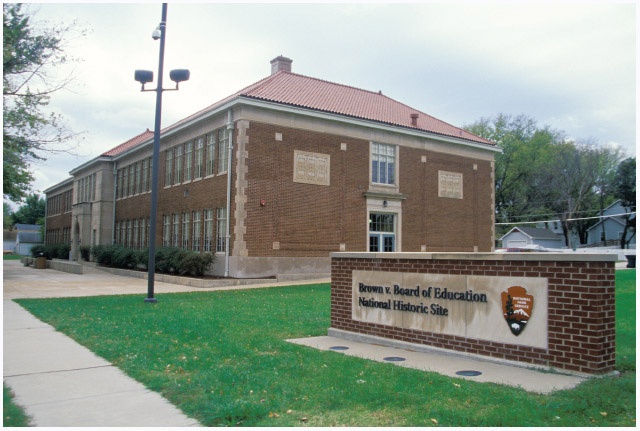 jurisdiction the equal protection of the laws.” Despite this apparent guarantee of equal treatment and protection, racial discrimination and segregation persisted for decades, particularly in the South, where state legislatures sought to circumvent the Constitution by passing so-called Jim Crow laws that enforced the segregation of races. Although Jim Crow legislation was challenged many times, it was repeatedly upheld in court. In 1896 the Supreme Court ruled in Plessy v. Ferguson that separate facilities for black and white citizens were constitutional, so long as they were equal. This provided the legal rationale and precedent for the perpetuation of legal, economic, and social discrimination against African Americans through the mid-twentieth century.

There were also, however, repeated attempts to undermine Plessy v. Ferguson and end segregation and discrimination. One of the most prominent leaders of these efforts was Thurgood Marshall (1908–93), a lawyer and one of the leaders of the Legal Defense and Education Fund of the National Association for the Advancement of Colored People (NAACP). In a series of cases—Murray v. Maryland (1936), Missouri ex rel. Gaines v. Canada (1938), Sweat v. Painter (1950), and McLaurin v. Oklahoma Board of Regents of High Education (1950)—Marshall, along with his colleague Charles Hamilton Houston (1895–1950), led the NAACP Legal Defense and Education Fund to a series of incremental victories in cases regarding segregation, discrimination, and inequality in public education. Then, in the early 1950s, five separate cases—Brown v. Board of Education of Topeka, Briggs v. Elliot, Davis v. Board of Education of Prince County, Boiling v. Sharpe, and Gebhart v. Ethel—challenging the constitutionality of segregation in public schools were bundled together as one case, called Brown v. Board of Education, which came before the Supreme Court in late 1952.

Over a two-year period in which the deeply divided justices deliberated and reheard the case, Chief Justice Fred Vinson (1890–1953) died and was replaced by Earl Warren (1891–1974), who was finally able to lead the court to a consensus. On May 14, 1954, the court declared unanimously that segregation in public schools was unconstitutional. In his opinion, Warren wrote, “We conclude that in the field of public education the doctrine of ‘separate but equal’ has no place. Separate educational

In his opinion, Warren wrote, “We conclude that in the field of public education the doctrine of “separate but equal” has no place. Separate educational facilities are inherently unequal. “A year later, on May 31, 1955, the court issued a plan for implement-ingdesegregation, callingon states do so “with all deliberate speed.”

facilities are inherently unequal.” A year later, on May 31, 1955, the court issued a plan for implementing desegregation, calling on states do so “with all deliberate speed.”

Despite considerable resistance to the decision, schools and other public places were eventually desegregated as a result of the civil rights movement of the 1950s and 1960s. This end to legally sanctioned racial division led to an increase in educational and economic opportunities for African Americans. In a 2006 article evaluating the role of Brown v. Board of Education, Orley Ashenfelter, William J. Collins, and Albert Yoon observe that “inter and intra cohort income patterns in 1990 suggest that school desegregation had an economically significant, positive effect on blacks' income and high school completion rates.”

The legacy of Brown v. Board of Education is still a source of much debate, with many observers arguing that racial segregation has been allowed to continue as a result of lingering economic disparities between white and black Americans. According to this viewpoint, the disproportionate impoverishment of African Americans is an outcome of ongoing racial discrimination and has resulted in de facto racial segregation by neighborhood and, thus, school district. Molly S. McUsic, in an article for the 2004 Harvard Law Review, writes, “As an articulation of principle, Brown has succeeded. As a tool of integration, it has failed. American children today attend increasingly segregated schools.”

Ashenfelter, Orley, William J. Collins, and Albert Yoon. “Evaluating the Role of Brown vs. Board of Education in School Equalization, Desegregation, and the Income of African Americans.” American Law and Economics Review 8.2 (2006): 213–48. Print.