Johnson is the first case in which the Supreme Court dealt head-on with the question of whether the First Amendment protects desecration of the flag as a form of symbolic speech. In previous cases involving such treatments of the flag, the Court had tiptoed around this question, deciding the cases on narrower grounds that did not reach the ultimate question of whether individuals or groups enjoy a First Amendment right to destroy or otherwise desecrate a flag to convey a message (e.g., Street v. New York, 394 U.S. 576 [1969]; Smith v. Goguen, 415 U.S. 566 [1974]; Spence v. Washington, 418 U.S. 405 [1974]). Commentators speculated that the Court was reluctant to reach the ultimate question because of the justices’ respect for the flag, and because of the emotional and controversial nature of the issue. While the right to burn one's own flag appears consistent with modern free speech principles and jurisprudence, such expressive conduct is also deeply offensive to most Americans, Supreme Court justices included. Consequently, the style and tone of the dissenting opinions are very personal, representing moral exhortations as much as expositions of the law. The central question in the case is whether the government is empowered constitutionally to single out the flag for protection as a special symbol of national unity that transcends the erstwhile principles of free speech.

Police arrested Gregory Lee Johnson for burning a flag in front of a building while protesting the policies of President Ronald Reagan during the 1984 Republican National Convention in Dallas. This act offended many onlookers, and authorities charged Johnson with violating a Texas statute that prohibited intentionally or knowingly desecrating a state or national flag. He was convicted at trial and received a one-year prison sentence and a $2,000 fine. Johnson appealed to the Texas Court of Criminal Appeals, which reversed the verdict.

Justice Brennan's opinion for the majority dealt with the constitutionality of the Texas statute “as applied” to Johnson's speech act rather than “on its face,” for the majority believed that the statute could be constitutionally applied to a desecration of the flag that did not involve an attempt to make a political or social message (for example, dragging a flag through the mud simply because one is lazy or thoughtless). In the latter instance, the First Amendment would not “be in play” at all, for the First Amendment in the context of expressive conduct protects only expression meant to send some sort of message. But Johnson clearly intended to communicate a political message, so the Court had to consider the case in light of First Amendment doctrine. 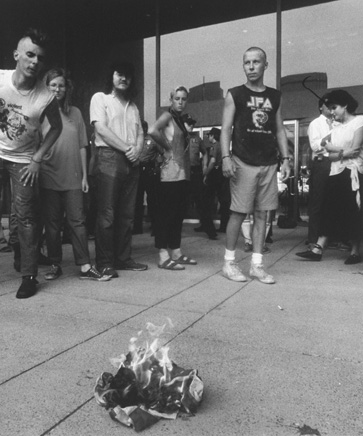 Protestors burning an American flag at the Republican National Convention in Dallas, Texas, 1984. After the Supreme Court sided with Gregory Lee Johnson's claim that the First Amendment protected his right to burn the American flag, many politicians disappointed with the decision sought to add an amendment to the Constitution specifically banning flag burning. However, congressional supporters have yet to gather enough votes to pass an amendment to forward to the states for ratification. IMAGE WORKS/TIME LIFE PICTURES/GETTY IMAGES

The state possesses broad power to prohibit or regulate harmful “conduct” that is either unrelated to speech or is the incidental by-product of some forms of speech (e. g., loud noise, sleeping in tents to dramatize homelessness, burning objects in public). Thus, as a threshold issue the Court in Texas v. Johnson had to decide if Johnson's desecration constituted “conduct” or “speech.” Consistent with precedents, Brennan concluded that the desecration was a combination of speech and conduct. It was “expressive conduct” because it constituted an attempt to “convey a particularized message” that involved the act of burning a flag. First Amendment law gives the state more power to regulate “expressive conduct” than to regulate “pure speech,” and flag burning provides a classic example of expressive conduct, as opposed to pure speech. Accordingly, the Court applied the special balancing test it had developed for cases dealing with expressive conduct.

The Court established this balancing test in the famous draft-card burning case, United States v. O’Brien, 391 U.S. 367 (1968). Based on O’Brien, when “speech” and “non-speech” elements cohere in the same speech act, the Court applies a four-part test that allows the state to protect

EXPRESSIONS OF RESPECT FOR THE U.S. FLAG

By the rude bridge that arched the flood,
Their flag to April's breeze unfurled,
Here once the embattled farmers stood,
And fired the shot heard round the world.

The foe long since in silence slept;
Alike the conqueror silent sleeps;
And Time the ruined bridge has swept
Down the dark stream which seaward creeps.

On this green bank, by this soft stream,
We set to-day a votive stone;
That memory may their deed redeem,
When, like our sires, our sons are gone.

Spirit, that made those heroes dare
To die, and leave their children free,
Bid Time and Nature gently spare
The shaft we raise to them and thee.

Up the street came the rebel tread,
Stonewall Jackson riding ahead.

Under his slouched hat left and right
He glanced; the old flag met his sight.

It shivered the window, pane and sash;
It rent the banner with seam and gash.

Quick, as it fell, from the broken staff
Dame Barbara snatched the silken scarf.

She leaned far out on the window-sill,
And shook it forth with a royal will.

“Shoot, if you must, this old gray head,
But spare your country's flag,” she said.

important state interests that are not related to the state's response to (or feelings about) the content of the speech act's message per se. A law regulating the nonspeech aspects of expressive conduct is permissible if the law is within the constitutional power of the state; if it furthers an important or substantial government interest; if the government's interest is unrelated to the suppression of free expression; and if the incidental restriction on free speech is no greater than is essential to further the state interest.

In O’Brien, the Court concluded that the new congressional law prohibiting purposeful or knowing destruction of draft cards passed the four-part test. Essential to this conclusion was the majority's contention that the law was an important means to protect the efficiency of the Selective Service, and that the law was not designed to punish draft-card burners because of the government's disapproval of the message that such symbolic expression conveys (that is, the application of the law was deemed unrelated to the suppression of free expression).

Texas presented two justifications for Johnson's conviction: preventing disturbances of the peace caused by hostile reactions to the act of flag desecration, and preserving the integrity of the flag as a symbol of national unity. Justice Brennan concluded, however, that these objectives were insufficient to pass constitutional muster. First, the state's interest in preventing breaches of the peace was not implicated by the facts of the case because Johnson's speech act constituted neither “fighting words” nor a direct incitement to imminent lawless action—two traditional limits to speech in the public realm (Chaplinsky v. New Hampshire, 315 U.S. 568 [1942]; Brandenburg v. Ohio, 395 U.S. 444 [1969]).

Second, unlike the enforcement of the draft-card law in O’Brien, Texas's desire to protect the integrity of the flag as a symbol was indeed directly related to the suppression of speech because of the message it conveys. Consequently, the state's action failed the key third prong of the O’Brien test, so the Court applied the highest level of scrutiny to Texas's action. On the basis of this scrutiny, the majority ruled in Johnson's favor: “If there is a bedrock principle underlying the First Amendment, it is that the Government may not prohibit the expression of an idea simply because society finds the idea itself offensive or disagreeable.”

The dissenters’ approach was less abstract. Chief Justice Rehnquist (joined by Justices White and O’Connor) quoted such poems as Ralph Waldo Emerson's “Concord Hymn” (1837) and John Greenleaf Whittier's “Barbara Frietchie” (1864), which saluted the flag. Rehnquist considered the flag to be not simply another idea or point of view offered in the marketplace of ideas, but rather a transcendent symbol of national unity. Johnson could convey his anger at America by other effective methods, according to the chief justice. In his separate dissent, Justice Stevens agreed that the flag was a special symbol of national unity meriting special First Amendment treatment, and he expressed fear that the majority's decision could lead to the constitutional protection of various forms of vandalism against national property. But Johnson did not destroy

Antiwar demonstrator burning an American flag, Portland, Oregon, March 20, 2003. In a five-to-four decision, the Supreme Court sided with Gregory Lee Johnson, a man arrested in Texas after setting fire to an American flag during the 1984 Republican National Convention. Justices voting in the majority ruled Johnson's flag burning an expression of free speech, therefore protected by the First Amendment. AP IMAGES

government property (his flag was his own), so Stevens's fear appears misapplied.

The Supreme Court's decision in Texas v. Johnson was greeted with joy in libertarian quarters, but with anger or despair in much of the country. In reaction, President George H. W. Bush (1924–) and his allies proposed a constitutional amendment to support protection of the flag as a symbol, but this effort fell short of the needed two-thirds vote in each house of the Congress. Instead, Congress passed a statute that outlawed flag burning. Though Congress proclaimed the new law viewpoint neutral, in 1990 the same Supreme Court majority of five that had ruled against Texas in Johnson reversed convictions secured under the authority of that statute. The Court held that Congress could protect the flag as a “trademark,” but could not punish flag burning because of the message it sends (United States v. Eichman, 496 U.S. 310 [1990]). In subsequent years, Congress came very close to passing a constitutional amendment against flag desecration, but fell short. If such an amendment were to achieve success in the Congress, it would likely then be approved by the necessary three-quarters of the states.

Texas v. Johnson is a linchpin of the modern doctrine of speech, which the Supreme Court fashioned in a variety of contexts in the decades after World War II (1939–1945). The modern doctrine of speech holds that government may not punish speech for any of three reasons: (1) because government disapproves of the message of the speech; or (2) because government is afraid that a listener might decide to break the law (nonimminently) after hearing the message; or (3) because people might be offended by the expression. By upholding the right of free speech in a case replete with such emotion, a majority of the Court helped to secure these principles in First Amendment law.