In December 1965, a group of secondary school students in the nation's heartland sought to express their concerns about casualties in the Vietnam War (1957–1975) by wearing black armbands to their Des Moines, Iowa, public schools. A handful were suspended or sent home for violating a hastily prepared school-district rule against wearing armbands as symbols of protest. Three of the disciplined students—Christopher Eckhardt, Tinker, and Mary Beth Tinker—sought and obtained the assistance of the Iowa Civil Liberties Union (ICLU) to challenge school-district policy with a lawsuit in federal court. The “armband case” quickly became a focus of controversy throughout the Hawkeye State, occasioning many newspaper stories, editorials, and letters to the editor.

Dan Johnston, the students’ appointed ICLU lawyer, argued that the symbolic speech of his clients caused little disruption in the classroom and, more importantly, represented protected political expression under the First Amendment to the U.S. Constitution. The school district's attorneys maintained that school administrators had the right to prohibit forms of expression that might threaten the orderly conduct of school activities. The Tinkers and Chris Eckhardt lost their case in federal district court and the Eighth Circuit Court of Appeals, but they were successful in persuading the U.S. Supreme Court to hear their appeal under its certiorari jurisdiction.

The armband case was argued before the nation's highest court during the week following Richard Nixon's 1968 election as president. The Supreme Court decision was issued in February 1969. Writing for the seven-person majority, Associate Justice Abe Fortas first accepted the assertion that the wearing of black armbands was a “type of symbolic act that is within the Free Speech Clause of the First Amendment.” Then, in a much-quoted phrase, Fortas held that “students . . . [do not] shed their constitutional rights to freedom of ... expression at the schoolhouse gate.” Fortas cautioned, however, that the right to wear armbands in school needed to be balanced against the right to maintain order. Since the record in the case did not reveal any substantial disturbance on the part of the armband-wearing Iowa students, and since the students’ actions did not interfere with the academic work of the schools or collide with the rights of other students, Fortas concluded that the Tinkers and Chris Eckhardt were acting within their constitutional rights when they engaged in their symbolic acts. The well-mannered, minimally disruptive actions of the Iowa secondary school students did not trouble Fortas and the Court majority. But, as Fortas's opinion made clear, had heated expression in the context of violent antiwar protests been at issue, the Court's ruling would probably have been different.

After dispatching the matter of whether the wearing of the armbands was in fact disruptive, Fortas addressed the issue of whether the school administration's apprehension of possible disruptions could justify a proscription of this form of expression. Again Fortas sided with the students, ruling that the school administration had failed to demonstrate that the planned student protests might “materially and substantially interfere with the 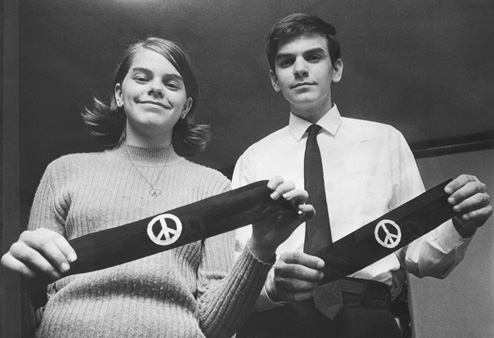 Mary Beth and John Tinker, holding black armbands, March 4, 1968. One of the first cases heard by the Supreme Court regarding the free speech rights of students, Tinker v. Des Moines School District established the precedent that students can exercise their First Amendment right of expression, such as wearing an armband as a sign of protest, providing the conduct does not disrupt the order of the school. © CORBIS-BETTMANN

requirements of appropriate discipline in the operation of the school.”

Associate Justice Hugo Black wrote the longer and more impassioned of the two dissenting opinions in the case. In an oral statement when presenting his dissent in Court on February 24, 1969, he commenced with guns blazing: “I disclaim any sentence, any word, any part of what the Court does today.” He then emphasized the parade of horrible consequences that would result from the majority's decision: students running amok in school corridors, children determining their own curricula, and youngsters setting their own standards for evaluation. Black even quoted with approval the old chestnut that “children are to be seen not heard.”

The ruling in Tinker v. Des Moines School District, 393 U.S. 503 (1969) was greeted by legal experts in the late 1960s and early 1970s as the Supreme Court's most significant decision to date on the rights of students. Coming near the end of Earl Warren's chief justiceship, the Tinker decision marks the high point of the liberal jurisprudence of the 1960s. The Tinker precedent, however, has been whittled away by subsequent Supreme Court decisions. In successor Courts—under the leadership of Chief Justices Warren Burger, William Rehnquist, and John Roberts—student rights have generally been found to be subordinate to maintaining order in the schools. For example, in Bethel School District No. 403 v. Fraser, 478 U.S. 675 (1986), the Court ruled that a school administration was within its rights for suspending a student who employed sexual innuendos in a speech before a school assembly. Similarly, in Hazelwood School District v. Kuhlmeier, 484 U.S. 260 (1988), the Court vindicated a principal's decision to delete two pages from an issue of a student newspaper because that school official felt that the content of the articles—one on the effects of divorce on families and the other on birth control and teenage pregnancy—might offend some students and other readers of the publication.

The shootings in the 1990s and early 2000s at schools in Colorado, Arkansas, Virginia, and other states—real tragedies but hardly the consequences of student free expression run amok—led numerous schools to clamp down

It can hardly be argued that either students or teachers shed their constitutional rights to freedom of speech or expression at the schoolhouse gate.

on student speech. After the killings at Columbine High School in Littleton, Colorado, in April 1999, for example, the American Civil Liberties Union's (ACLU) “intake files” of inquiries about possible threats to student rights increased significantly. One such inquiry involved a young man's request for ACLU assistance to contest the allegation that he committed a terrorist act by typing the words “the end is near” in an e-mail message to several friends.

A 2007 student speech case continued the conservative post- Tinker trend. In Morse v. Frederick, 551 U.S.___, the Court upheld the right of a Juneau, Alaska, principal to confiscate a banner reading “BONG HiTS 4 JESUS.” By a five-to-four majority, the Court ruled that the principal could constitutionally rip down a sign purporting to endorse drug usage, even though the banner's language was rather cryptic and was displayed at an off-campus school-sponsored event. Citing Tinker at numerous places in his opinion, Chief Justice Roberts ruled that the “special characteristics of the school environment” noted in Tinker and the governmental interest in discouraging student drug abuse permit the restriction of student expression “reasonably regard[ed] as promoting illegal drug use.”

The majority opinion in Morse v. Frederick underlines the conclusions reached at a 1999 conference held at Drake University in Des Moines, Iowa, titled “Student Rights: Thirty Years after Tinker v. Des Moines.” The formal presenters at the conference, although recognizing the pathbreaking importance of the Tinker decision, generally saw Fortas's 1969 ruling as being undercut by subsequent Court decisions and social trends. In the closing words of one of the speakers: “Simply put, thirty years after Tinker, students do leave most of their First Amendment rights at the schoolhouse gate.”