About the Publication: Harper's debuted in 1850, quickly becoming a mass-market magazine featuring American artists and the news of the period. Harper's has published works by significant political figures in their youth, including Winston Churchill. In the 1970s, Harper's was one of the first magazines to cover the My Lai massacre. Harper's publishing interests are now HarperCollins, and Harper's is now published by the Harper's Magazine Foundation, which was formed with assets from a grant from the MacArthur Foundation.

Women and men have not been treated equally in the American workplace, even though historically both women and men have worked. In the early agricultural households, women worked in the house, while the men worked on the farm. With the early industries, women and men both worked out of the home. Women were not treated equally, though, as women generally were not allowed the right to vote. In the nineteenth century, middle and upper class women (without being asked) were (theoretically) put upon a pedestal and elevated into the "cult of domesticity"—assigned a special role to run the home, protect it, and elevate the morals of the home. With the rise of the middle and upper classes, women were not allowed to work in industry, and women were kept out of the professions.

Societal barriers for women began to be lowered in the early twentieth century. The Nineteenth Amendment (1920) provided that the right to vote would not be denied on the basis of sex. Women also served in the armed forces and worked in factories during World War I (1914–1919) and World War II (1939–1945). Particularly after World War II, women often did not want to return to the home or move from the factory to a lower paying job. Women, though, did not have a choice, as they were usually summarily fired and replaced by men. In the prevailing culture of the 1950s, women were supposed to gladly return to the home and allow men to work. Besides those not wanting to be homemakers, there were also those who needed to work for economic reasons.

Many Americans regard the 1950s as a time when most women stayed home, and men were the sole breadwinners. As this excerpt indicates, the decision for women to work was very often economically based. Women were working to purchase extra items for the children or a larger house. Women were also working to help provide financial security that the experience of the Great Depression caused them to doubt. The 1950s were the decade when consumerism established its hold on America—which it has never lost since. That consumerism was financed, in part, by women working. 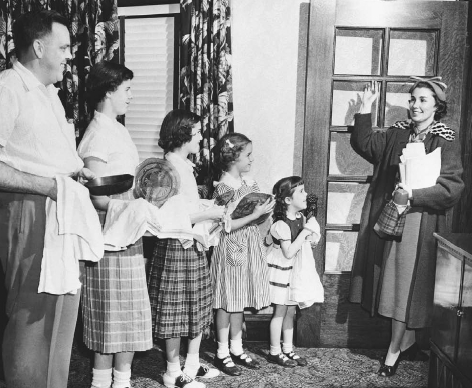 A working mother waves goodbye to her family as she leaves to go to her job outside of the home, 1953. © BETTMANN/CORBIS. REPRODUCED BY PERMISSION.

These women, though, were not trying to change the world, and not all women worked. Further, there were only limited employment opportunities open to women. The few female law school graduates were shunted into second-class jobs. Sandra Day O'Connor, graduating near the top of her class at Stanford, could not find a job at any law firm. Women were kept out of other professions as well, and they were told to be happy being housewives. It took until the 1960s for women, at least publicly and frequently, to be crusaders for change. Despite outside employment, women were still left with most of the child-care, cleaning and cooking responsibilities. In the 1990s and 2000s, there has been a resurgence of stay-at-home moms, and even the emergence of stay-at-home dads. People began to consider whether a one-income (or a oneand-a-half-income) family was best for all concerned. A perfect solution for all still has yet to be found, as America still struggles with the "two-income" family issue.

SYNOPSIS: The author opens with the observation that working is no longer a political statement, but an economic one. She then notes that men have accepted the necessity of women working in order to break even, and that men and women know that families can no longer be raised on a single income. The article closes commenting that the Great Depression and the war have convinced families that they cannot go back to having only one income.

I am a wife, a mother, and a grandmother, and I have been a continuous jobholder since I graduated from college. Besides all that, I am a dodo.

I never used to think of myself as a dodo, but it has been brought home to me by my married daughter and her contemporaries that I most certainly Page 345  |  Top of Article am. These young people have perpetrated a revolution right under the noses of my generation. There have been no parades, no crusading arguments or lectures or legislative lobbying. They did not fight for a revolution—they simply are one.

The whole argument of marriage versus a career which burned like a roaring fire when I was my daughter's age is now as dead as wet ashes. The revolution that we were so vociferous about as a matter of principle has taken place unobtrusively as a matter of hard necessity.

My daughter and her friends and the young married women who work in my office do not call themselves career women. They do not harangue about the right to develop their individual capacities. They do not discuss the primary function of woman as a homemaker. They do not argue the propriety of muscling in on the labor market. They just plain work.…

Under present circumstances, a single pay envelope will not meet the needs of a white-collar-class family. It is as simple as that.…

Through a good many years of my life I heard men say, "I'd be ashamed to let my wife work." The standard of a man's success in America was—and to some extent still is—his earning capacity. It was a symbol of his masculine prowess and an extension of his virility. To maintain his social, his economic, and his psychological position as titular head of the family by virtue of being its source of supply he often had to relinquish long-term goals for temporary advantages and to sacrifice his natural aptitudes to the demands of an immediate and steady job. No wonder Thoreau said that "most men lead lives of quiet desperation."

No wonder, then, that men jealously guarded their prerogatives. To be a "good provider" was one of the chief criteria—and in the eyes of many was the criterion—of man's achievement. Every woman of my generation who worked in what was called a "man's job" knew what it was to walk on eggs. With a diplomacy that would make Machiavelli look like a coal-heaver in a conference of foreign ministers the masculine ego had to be protected from the slightest scratch in both marital and occupational relations.

This often made the women of my generation hopping mad. What we did not realize was that the restrictions foisted on us by the masculine ego were not prompted by innate sex cussedness. They were imposed by a cultural code which men dared not flout under penalty of losing face, and which they would keep women from flouting, if they could, for the same reason. But something has happened to alter this code, something that has convinced men as well as women that the rigid demarcation of their spheres of action made them both the losers.…

These young people were children during the great depression of the thirties. They learned the facts of economic life by experiencing or observing the collapse of financial security. They were married either just before or during or after the late war, and when their husbands were called into the armed forces the young wives had to learn to stand alone in a practical as well as an emotional sense.

Once the war was over and husbands returned, few of them had had a chance to accumulate any savings. The allotments they received from the government were insufficient to support their families in accordance with middle-class standards of living. Wives with or without children either had to produce income or throw themselves on the mercy of relatives who had problems of their own.…

How does a two-income family cope with the problem of bringing up young children? Not so long ago a woman of proved vocational ability was adjured to divide her life into two—or, more rarely, three—periods. She might work until she produced a baby, but then she must either bury her vocation altogether, exchanging it for that of housewife-and-mother, or else lay it away for long years with the rather feeble hope of resuscitating it after the children were grown. That picture has now changed out of all recognition. Indeed, one hears wives arguing that children, instead of constituting the unanswerable argument against the two-income family, are strong arguments in its favor.

"If it weren't for the children," said one wife to me, "I'd be tempted to try to get along on one salary, even if it meant skimping. But we need two incomes to enable us to have a house with a yard that the children can play in; to live in a neighborhood where I don't have to worry about their playmates; to provide a guitar for the musical one and dancing lessons for the one who needs to improve her muscular coordination—not to mention teeth-straightening and medical insurance and the bonds we are stowing away for their education.…"

The depression years, the war years, and the postwar years have cracked the old economic-social family mold. These were forces outside the control of individual women, but they have learned a lesson Page 346  |  Top of Article from circumstances. The working wives of 1951 have learned to recognize the mistakes of my generation, and are determined not to repeat them.…