A principal composer of the classical period and of all time; b. Salzburg, Austria, Jan. 27, 1756 (baptized Johannes Chrysostomus Wolfgang Theophilus); d. Vienna, Dec. 5, 1791. Mozart's father, Leopold, had been a respected composer and violinist in the employ of the archi-episcopal court of Salzburg. As a small boy, Mozart already displayed amazing talents as violinist and harpsichordist, even as composer. In 1769 he entered Archbishop Colloredo's service. There, he had frequent opportunities for writing sacred music, yet he resented increasingly the confining environment of a small ecclesiastical state, and this resentment was aggravated by travels to important musical centers throughout Europe. The inevitable break between the archbishop and the young musician occurred in 1781. Mozart then settled in Vienna, always hoping for a desirable court position. As late as 1790 he applied for an appointment to the Austrian court, stating in his application that "from my childhood on I have been familiar with the church style." The desiredPage 48  |  Top of Article appointment did not materialize. That Mozart wrote virtually no sacred music after leaving Salzburg is attributed in part to this failure, but also to the curtailment of church music during the age of JOSEPHINISM.

Mozart was essentially a believing and practicing Catholic, as seems certain from many of his letters (Einstein, Mozart: His Character, His Life, His Work 77–81). He saw no conflict between his religious beliefs and Free-masonry in which he became involved in 1784, taking an active part in its affairs and providing a number of compositions for Masonic occasions—e.g., Cantatas K. 429, 471, 623; Masonic Funeral Music, K. 477. The "Masonic virtues" of tolerance, brotherly love, steadfastness, and silence also figure in the libretto of The Magic Flute, an opera generally interpreted as a Masonic allegory. Objections against liturgical use of Mozart's sacred compositions have often been voiced, in the 19th century and today, chiefly because of their allegedly "worldly" or "operatic" nature. Such a view can largely be explained by the fact that his operas and his instrumental music have always been more widely known. Many features that simply represent Mozart's own style, and that of his period, when encountered in his sacred works remind some listeners of his secular music. To this day, however, his church music regularly receives liturgical performances in Austria and Southern Germany.

Sacred Works. Both individual Mass movements and complete Masses from Mozart's childhood and adolescence have been preserved, e.g., the Kyrie, K. 33 (1766), and the Missa Brevis, K. 49 (1768). Many early works (e.g., the incomplete Missa Brevis, K. 115) indicate that he had studied the sacred music of Eberlin and Michael HAYDN, especially their works in strict (contrapuntal) style; yet few of his own compositions are consistently in this style. Strict contrapuntal writing (the stile antico of which Padre Martini was considered a master) represented a challenge to the young composer but was in Mozart's idiom united with other elements, especially the prevailing Italian church style—the stile moderno, in which one melodic line was prominent, and often quite florid, with orchestral accompaniment.

Masses. The Missa Solemnis, K. 139, a substantial early work, has a large orchestra with timpani and four trumpets. Other important settings include the Missa in honorem SSmae Trinitatis, K. 167, in which there is no vocal solo writing; the Missa Brevis in C, K. 220, in an essentially homophonic style; K. 257, the "Credo Mass" (so-called because of the recurring exclamation "Credo, credo"); the "Coronation Mass," K. 317, written for a small pilgrimage church near Salzburg; and the great but incomplete Mass in C-minor, K. 427 (1783). Some portions of this last, especially the Laudamus te with its florid solo passages in Neapolitan style, have been cited as evidence of the "operatic" quality of his sacred music. Other sections, however, are severely contrapuntal, some in five-or eight-part choral writing. Much of the music is serious, full of dramatic tension, expressing the sacred text with eloquence and sincerity. The unfinished Requiem, K. 626, completed by his pupil Franz Süssmayer, has become his best-known sacred work. During his last years Mozart thought often of death; he seems to have felt that the Requiem, commissioned under rather mysterious circumstances, was to be his own funeral Mass, and the setting is consistently in keeping with the text.

Other Liturgical Music. Among other extended sacred works are two settings of Vesper Psalms and Magnificat, K. 321 and 339, and several litanies, K. 109, 125, 195, 243. His smaller sacred works, especially the motets, show great variety. The Introit Cibavit eos, K. 44 (Bologna 1770), is a study in the stile antico, based on a Gregorian CANTUS FIRMUS. Other motets, e.g., the Offertory Inter natos mulierum, K. 72, reflect the musical idiom of the young composer's home environment. Motets in the purely soloistic Italian style were written when an occasion called for them. One such, Exsultate, jubilate, K. 165, composed for the castrato Rauzzini, consists of three arias, ending with the well-known Alleluia. His last motet, Ave verum corpus, K. 618 (1791), scored for four voices, strings, and organ, still appeals widely because of its simplicity and sincerity. There are also 17 church or "Epistle" sonatas, short compositions for strings and organ, with wind and timpani parts added in some instances. In the Salzburg cathedral these compositions were traditionally performed between the Epistle and the Gospel (see ORGAN MUSIC).

Style. Many stylistic characteristics of Mozart's sacred works are found also in his secular music. Some Mass movements are in sonata form (suggested especially by the Kyrie-Christe-Kyrie text). Characteristic themes may recur throughout a movement. Melodic structure, the harmonies, and instrumentation found in Mass and Offertory frequently resemble those of symphony and opera. No more than in J. S. BACH's age did composers of Mozart's draw rigid distinctions between sacred and secular style, though counterpoint (the "Palestrina style") was considered especially suitable for the church, particularly during Advent and Lent. Mozart's style developed and matured along similar lines in sacred and secular works. Thus, parallel prominence is given to wind instruments and use of chromaticism in Mozart's later sacred works (C-minor Mass, Requiem) and in symphonies and concertos from the same period. Skillful counterpoint distinguishes many of his later works, especially after 1782, when his acquaintance with Baron Swieten led to renewed interest in the music of Bach and HANDEL. WhilePage 49  |  Top of Article he impressed his own style characteristics on his sacred music, Mozart did observe many conventions found in liturgical music of his age, among them the use of a figured bass (by then largely obsolete in secular music), and the traditional fugal endings of Gloria (Cum Sancto Spiritu) and Credo (Et vitam venturi saeculi). 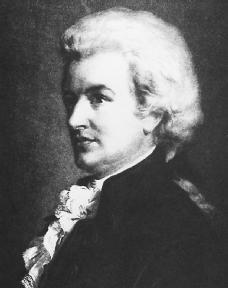