During its golden age the Greek city-state of Athens was governed by a direct democracy. Its central institution was the Ecclesia (Assembly), which was open to all citizens and carried out most decision-making functions. This body was supported by the Boule (Council of Five Hundred), a deliberative council that handled the day-to-day governance of the city-state. Judicial matters were handled by dikasteria (jury courts), archons (magistrates), and a council called the Areopagus.

Athens was a Greek city-state located in the territory of Attica, which was bordered by mountains to the east, west, and north and by the Aegean Sea to the south. Archaeological evidence suggests that Athens was inhabited as early as 3000 BC and that it was an important site of the Mycenaean civilization during the second century BC. Athens emerged as a city-state during the eighth century BC.

The political history of Athens is marked by progressive democratic reforms that took place over several centuries. Early Athens was ruled by kings who were advised by the Areopagus. During the eighth century BC, however, the royalty was eclipsed by the aristocracy. The kingship was replaced by a board of elected archons, who held executive power. This board was made up by the archon proper (the chief magistrate), the polemarch (commander in chief), and the basileus (religious leader), as well as six thesmothetae (junior magistrates), who handled minor judicial matters. The archons were drawn from the eupatridae (noble classes) and maintained a political monopoly. During this time Athens was ruled by a number of tyrannical archons—most notably Draco (seventh century BC), who became infamous for his harsh legal code (hence the English word draconian). The Ecclesia was also established during this period.

The first democratic reforms were implemented in 594 BC by the Athenian lawmaker Solon (c. 630–c. 560 BC). Solon’s reforms, which were codified in a new constitution, were a mixture of economic and political changes premised on the idea that the state should be guided by its citizens. The constitution sought to limit the power of the aristocracy and expand political rights. Solon divided Athenians into four classes based on wealth and military service, giving the poorest class greater rights to participate in civic life and easing their economic burden. The powers of the Areopagus were curtailed, but the aristocracy retained its political grip, because only members of the highest classes could serve as archons or as members of the Areopagus. Solon is also credited with establishing the Boule and opening the Ecclesia to all citizens.

The next significant round of democratic reforms took place in 508 BC. The statesman Cleisthenes (c. 570–500? BC), a champion of democracy, sought to break up the class-based political system. Thus, he did away with Solon’s four classes, replacing them with ten tribes. The tribes were further divided into demes. The deme became the basic unit of local governance in Athens and crossed all social divisions. Each tribe elected members to the Boule, which was expanded from four hundred to five hundred members.

Athenian democracy reached its peak under Pericles (c. 495–429 BC), the most important statesman of the fifth century BC. Pericles maintained the structure of government established by Cleisthenes but also introduced payments to the poor for public service, believing that civic participation should be as broad as possible. Indeed, he argued, “Our constitution favors the many instead of the few.” Under Pericles, Athens became the most important power in ancient Greece.

During its golden age in the fifth century BC, Athens was governed by a direct democracy. Citizenship was extended to all males over eighteen following completion of military training; women, slaves, and metics (foreign residents) were excluded from political participation. Full political rights, including the rights to stand as a candidate for office and to serve on the courts, were extended at age thirty.

The central institution of the Athenian democracy was the Ecclesia; participation was open to all citizens, and service was voluntary. The Ecclesia was responsible for making executive decrees, passing legislation, conducting political trials, and electing government officials. Issues were openly debated at meetings (held forty times each year), and votes were taken by a simple majority. By 403 BC the first six thousand members (the number required for a quorum) were paid for their service. 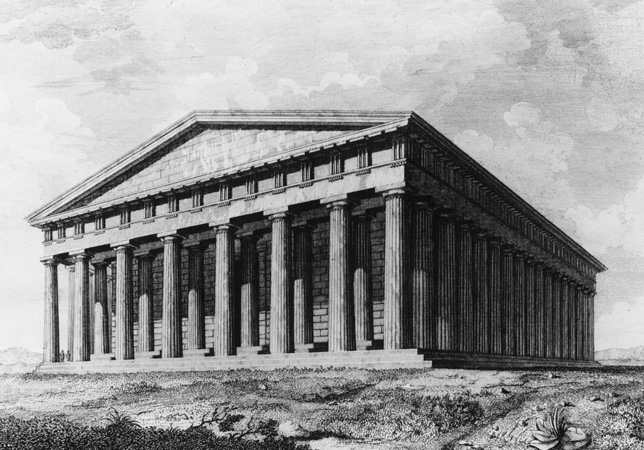 The Parthenon in Athens in a print from 1754. Hulton Archive/Getty Images

The Boule comprised fifty representatives from each of the ten tribes of Athens. Members were elected annually by citizens over the age of thirty. The Boule prepared legislation for the Ecclesia to vote on, organized Ecclesia meetings, and carried out some executive functions. The presidency of the Boule rotated monthly among the ten tribes (the political calendar was ten months long). Each day, one member was selected by lots to serve as epitastes, chairing the day’s meeting, holding the keys to the treasury, and greeting foreign emissaries. The Boule was also responsible for the daily operations of the city-state and enforced legislation passed by the Ecclesia.

The dikasteria, which handled both public and private suits, were a central component of the Athenian legal process. They were staffed by citizens over the age of thirty, who were selected annually from a pool of six thousand citizens. The dikasteria were viewed as a direct expression of the people’s will, as there was no higher authority than the jury. Specialized judicial cases were argued before other bodies—notably the archons, who handled religious and military cases, and the Areopagus, which decided on murder cases.

Unlike twenty-first-century politics, Athens had no political authorities or party loyalties—in fact, there is no word in classical Greek to denote political parties—although some members of the Ecclesia may have formed alliances or groups of opinions centered on particular policies or people. Rather, the chief divisions in Athenian society were based on wealth and class. Democratic reformers such as Cleisthenes and Pericles sought to remove such divisions to ensure the broadest possible participation in civic life.

Two political coups are notable in Athenian history. The first, in the mid-sixth century BC, saw the tyrant Peisistratus (d. 527 BC) seize control of Athens. At the time, tyranny was defined more in terms of force than repression. Indeed, under Peisistratus’s rule, the Athenian navy became the strongest in the Aegean, Athenian households became wealthier, and Athens was established as a center of Greek culture. Out of the chaos following the collapse of the Peisistratid tyranny, Cleisthenes emerged as a prominent statesman.

The second coup occurred in 411 BC, amid the unrest of the Peloponnesian Wars (460–404 BC), when a group known as the Four Hundred took control of Athens and established an oligarchy (government by the few). The government was short lived, however, as it was overturned within a year, and democracy was fully restored.

Two wars bookend the heyday of the Athenian empire in ancient Greece. Furthermore, victories over the Persians during the 490s and 480s BC established Athens as the leading Greek city-state. By the end of the fifth century BC, however, Athens had been defeated by Sparta in the Second Peloponnesian War (431–404 BC). In a stunning blow to Athenian democracy, Spartan forces established an oligarchy in Athens, known as the Thirty Tyrants, which ruled until 403 BC.

Politically, the Athenians’ defeat by the Spartans in 404 BC marked the end of their reign as the dominant city-state in Greece, though Athens remained an important center for Greek art, philosophy, and literature. In 322 BC Athens was absorbed into the vast empire of Macedonia, whose property requirements excluded many Athenians from civic participation. The vestiges of Athenian democracy persisted until 146 BC, when the city-state was conquered by the Romans.