From 509 to 27 BC Rome was ruled by a republican government comprising three main elements: a system of magistrates, a Senate, and several popular assemblies. In contrast to Athenian democracy, in which citizens participated directly in government, the Roman Republic was controlled indirectly through elected representatives. Because political power was concentrated in the hands of wealthy aristocrats, the Roman Republic is best described as an elected oligarchy (government by the few).

The Roman Republic refers to an ancient state centered in the city of Rome, dated from approximately 509 BC, when the last monarch was expelled, to 27 BC, when the first emperor of Rome was crowned.

According to legend, Rome was founded in 753 BC by the brothers Romulus and Remus; from that date until the early sixth century BC, a time known as the regal period, Rome was ruled by a series of seven kings. In 510 BC the Romans had overthrown the Etruscan-dominated monarchy, expelling the last king of Rome, Lucius Tarquinius Superbus (d. after 510 BC), and establishing a republic. The executive office of the king was replaced by two annually elected consuls (magistrates). Many of the political institutions of the early Roman Republic were, in fact, holdovers from the regal period but took on new roles in the Republic.

Beginning in the fifth century BC the Republic expanded considerably as Rome embarked on a campaign to dominate its Mediterranean neighbors. Wars with the Etruscan and Latin city-states and subsequent takeovers of territory in northern Italy and Greek colonies to the south broadened Roman holdings to encompass all of Italy by the late fourth century BC. Emboldened by these victories, the Romans set their sights on Carthage in northern Africa (present-day Tunisia), engaging in a series of Punic Wars (264–146 BC) with that empire. The Romans destroyed Carthage and by 44 BC controlled the Greek city-states, Egypt, Syria, Macedonia, Gaul (modern France), and parts of Asia Minor. These conquered lands were ruled as subject provinces administered by Roman governors with absolute power.

As Rome enlarged its burgeoning empire, tensions at home—the strain of years of foreign wars, economic recession, and a widening gap between the rich and poor—led to a breakdown of political stability. Civil wars raged from 133 to 31 BC. A variety of political and economic reforms were attempted, but they could not prevent the disintegration of the republican political system. The late Republic was characterized by plots to overthrow the state, intense political maneuvering, and profound violence. With its political institutions debased, the Republic was ruled in its final years by the dictator Julius Caesar (100–44 BC), who formed a triumvirate (government of three) with the warlord Pompey the Great (106–48 BC) and the general Marcus Licinius Crassus (115?–53 BC). In 44 BC Caesar was assassinated by a group of conspirators who hoped to inspire the rebirth of the Republic, but instead Caesar’s passing sounded its death knell. In a final attempt to regain stability, Augustus (63 BC–AD 14) was installed as the first emperor of Rome in 27 BC.

From 509 to 27 BC Rome was ruled as a republic (res publica, literally, “common wealth” or “public affairs”). This term referred to a government free of monarchical rule and controlled by the people. It was not necessarily democratic, in the sense of Athenian democracy, in that state affairs were conducted indirectly through elected representatives rather than directly through citizen participation. Because political power in Rome was concentrated in the hands of wealthy aristocrats, the Roman Republic is best described as an elected oligarchy.

The government of the Roman Republic comprised three elements: a system of magistrates, a Senate, and a number of popular assemblies.

The executive office was held by two annually elected consuls who served as chief magistrates and held imperium (absolute power). The consuls acted as head of the Republic, commanded the army, presided over the Senate and assemblies, executed decrees, and represented the Republic in foreign affairs. During times of emergency one consul could be appointed dictator for no longer than six months. The two consuls had veto power over one another, thus limiting their authority. The consuls were typically generals drawn from aristocratic families. After serving their one-year term (they could not be reelected for ten years), the consuls were often appointed to the Senate or to provincial governorships. 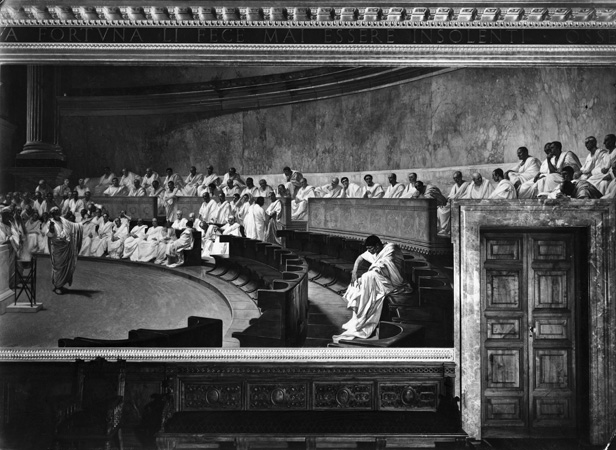 Other state offices were created to handle the administrative business of the Republic: the pontifex maximus (high priest) handled religious affairs (the current pope still holds this title today); the censor served as registrar, oversaw public works, handled finances, and, most important, guarded public morality; the praetor was in change of judicial functions and served as legal officer; the aedile supervised public works, temples, and markets and organized festivals; and the quaestor was in charge of the treasury and kept public records.

The position of tribune was created in the mid-fifth century BC in response to agitation among the plebeians (ordinary citizens) for representation. Tribunes (eventually ten in all) were elected by the plebeian assembly and had considerable power: They could veto the acts of consuls and other magistrates, and they could initiate prosecution for public offenses.

The Senate, the governing council and dominant institution of the Republic, advised both the magistrates and the people. Early on, the Senate was composed of three hundred men, mostly former magistrates and senior statesman, drawn from patrician (aristocratic) families and divided according to social standing. Members were appointed to life terms by the consuls. The Senate was limited to an advisory role at this time, though it held great political sway because of its members’ prestige. During the last two centuries of the Republic, however, the Senate’s power and composition changed considerably. Members were appointed by the censors instead of the consuls, plebeians became eligible for appointment, and the body took on real political power, as well as more members (the number doubled to six hundred in the first century BC and then swelled to a high of nearly one thousand). During the late Republic the role and prerogatives of the Senate were hotly contested, sparking political upheaval.

Finally, the republican government included a number of popular assemblies. During the pre-Republic period the “people” referred only to the patrician classes. Patricians were organized into thirty curiae (tribes), whose representatives made up the Comitia Curiata, the first and only popular assembly until the mid-fifth century BC. As civic participation in the Republic increased, the Comitia Curiata’s influence waned and its functions became merely ceremonial.

Other assemblies included the Concilium Plebis, a plebeian assembly formed in 471 BC to represent the interests of the lower classes; the Comitia Centuriata, a military assembly established in 450 BC that made decisions on matters of peace and war, elected magistrates, passed legislation, and heard appeals in capital cases; and the Comitia Populi Tributa, a tribal assembly founded in 357 BC to represent all Roman people.

Rome was traditionally divided between two social orders: the patricians, landed aristocrats of wealthy families who controlled the government, and the plebeians, ordinary citizens, often poor farmers, who made up most the population. Throughout its history, the Roman Republic experienced conflict between these two classes, referred to as the “struggle of orders.” In the years leading up to the Roman civil wars, a new social order emerged, the equestrians (or equites), who had profited from manufacturing and trade and exploited the newly conquered territories for financial gain. This class would figure prominently in later centuries under the Roman Empire.

During the late Republic (133–27 BC) two distinct political factions formed: the optimates (best of men) and the populares (populists). Members of both groups belonged to the patrician class. The optimates were senatorial conservatives who sought to uphold the traditional power of the aristocracy by limiting the power of the popular assemblies, enlarging the role of the Senate, and defining citizenship narrowly. By contrast, the populares favored land and wealth redistribution, encouraged a broad definition of Roman citizenship to include people in the provinces, and aimed to deprive the Senate of its political stranglehold.

The Punic Wars with Carthage were decisive in establishing Rome as a world power. In this series of wars Rome gained control of the strategic islands of Corsica, Sardinia, and Sicily; took the Iberian Peninsula (modern Spain); and destroyed the city of Carthage in 146 BC, giving Rome supremacy in the Mediterranean and whetting its appetite for conquest.

The Roman civil wars comprised a series of battles that occurred between 133 and 31 BC and ultimately led to the fall of the Roman Republic. Broadly speaking, these wars pitted senatorial conservatives, who sought to preserve the traditional power of the aristocracy, against populists, who favored redistribution of wealth and land and wished to break the oligarchy of the patrician class. However, Roman politics lacked a mechanism for dealing with opposition peacefully, and thus differences of opinion were typically resolved through violence.

The Roman model of republicanism had far-reaching influence on political thinking in succeeding centuries, from Niccolò Machiavelli (1469–1527) of the Italian Renaissance, to the philosophers of the Enlightenment in the eighteenth century, to the founding fathers of the United States of America. These thinkers held up the Roman Republic as an ideal to be re-created and sought to understand how a modern republic could avoid the collapse that befell the Romans.

Botsford, George Willis. The Roman Assemblies from Their Origin to the End of the Republic. Union, N.J.: Lawbook Exchange, 2001.