The Roman Empire was governed by an autocracy (government by one person) centered on the position of the emperor. The Senate, the dominant political institution of the Roman Republic, which preceded the empire, was retained by the emperor but lacked real political power. The hallmark of the Roman Empire was its extensive system of imperial administration, which included a hierarchy of magistrates and provincial governors.

The Roman Empire refers to the state that was centered in the city of Rome and included vast territories under Roman rule, dated from approximately 27 BC, when Augustus (63 BC–AD 14) was named the first emperor of Rome, to AD 476, when Romulus Augustulus (fifth century), the last ruler of the Western Roman Empire, was deposed. At its height, the empire stretched from Mesopotamia in the east to the Iberian Peninsula (modern Spain) in the west, and from the Rhine and Danube rivers in the north to the coast of Africa in the south, and had a population of sixty to one hundred million people.

The Roman Empire was preceded by the Roman Republic, but the transition from the latter to the former was not simply a matter of installing an emperor; rather, it was an incremental process of change in which a republican government was replaced with an autocratic system.

The last century of the Republic left Rome in disarray: violence, lawlessness, and civil strife had destroyed the Republic’s political processes. Thus, as the first emperor of Rome, Augustus embarked on a massive reorganization of Roman systems with the aim of establishing law and order. Indeed, he ushered in what became known as the Pax Romana (Roman peace), a nearly two-hundred-year period of relative peace. Such calm would have been unthinkable only decades earlier.

Augustus built a foundation for his rule by consolidating political power in himself. At the same time, he maintained the veneer of the old republican political institutions by preserving the Senate, popular assemblies, and magisterial offices, though over time these bodies became more ceremonial than functional, merely rubber-stamping the decrees of the emperor. Augustus also reshaped the Senate, reducing its number from over one thousand to six hundred by weeding out senators he considered unworthy and handpicking its membership.

Augustus and his successors built a system of imperial government to administer the empire’s vast territories and link them to the capital. This system, which allowed the provinces some measure of independence while being subject to Roman taxation and military control—functions crucial for the maintenance of the empire—proved quite efficient. Augustus settled former soldiers in the provinces, thus spreading Roman political and cultural influence and securing his power in distant lands. In addition, the Senate was opened up to provincial membership, so that by the second century AD, nearly half the senators were non-Roman. 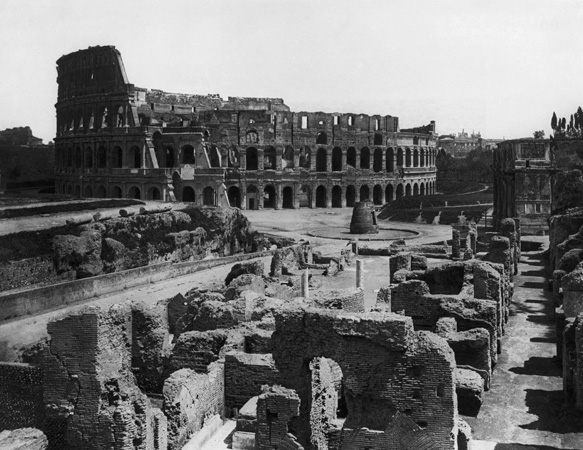 Ruins of the Roman Colosseum. Built between AD 70 and 82, the Colosseum seated approximately fifty thousand people and was used for five centuries for public spectacles, such as the execution of criminals or gladiators fighting wild animals. (c) Bettmann/CORBIS

The period of peace and prosperity inaugurated by Augustus persisted until the end of the second century, the high-water mark of the Roman Empire. By this time, the empire had attained an unprecedented degree of organization and unity—a remarkable achievement for such a large and diverse set of territories. This unity was attributed directly to the emperor: whereas under the Republic Romans’ chief loyalty had been to the state and its institutions, under the empire the emperor himself became their primary allegiance. Throughout the empire, cults were formed to worship the emperor and his family.

The emperors from Augustus through Marcus Aurelius (121–180) continued to strengthen their position and prerogatives. Many emperors came up through the military, and they used the power of the army to secure their rule. By the second century the emperor was named in public documents as dominus noster (Our Master), and his decrees were legally binding—indeed, all laws came from the emperor in the form of edicts, judgments, and mandates, known collectively as constitutiones principium. Increasingly, imperial appointees took on the positions once held by magistrates under the Republic.

The turning point of the Roman Empire was the rule of Commodus (161–192), who was known for his dictatorial behavior and whose reign was plagued by conspiracies and political strife. During the third century the empire faced invasions from barbarian tribes, economic decline, and growing social unrest—indeed, it was near anarchy. Two rulers emerged from this chaos: Diocletian (c. 245–c. 316) and Constantine I (d. 337), both of whom increased the authoritarianism of the government to the point of totalitarianism (absolute authority).

Diocletian was notable for his innovation in the emperorship. Believing the empire was too large to be governed by a single person, he chose to share his rule with a colleague, the former soldier Maximian (d. 310). The change shifted the locus of imperial power—even though Rome remained the capital of the empire, Maximian was installed in Milan so as to counter German invasions, and Diocletian moved to Nicomedia in Anatolia (present-day Turkey). The duo added two junior colleagues, thus establishing a tetrarchy (government of four). The elders, both taking the title “Augustus,” had chief decision-making power, whereas the younger statesmen, both known as “Caesar,” took on executive roles. Ultimately, however, the tetrarchy proved too unstable—there were no clear lines of succession—and thus the emperorship was centralized once again under Constantine.

The idea that the empire was simply too large to be administered by a single ruler persisted. Consequently, in 395, following the death of Theodosius I (347–395), the empire was divided into two parts—the Western (Latin) Empire based in Rome and the Eastern (Byzantine) Empire based in Constantinople (modern-day Istanbul, Turkey)—to provide for better control. Over the next century the two empires developed distinct identities, though they remained ostensibly united.

The fifth century saw the decline of the Western Empire as bands of Huns (from Mongolia) and Germans (a long-feared enemy) invaded Europe. The city of Rome was sacked by the Visigoths, a Germanic people, in 410 and again by the Huns in 455. In 476 the young emperor Romulus Augustulus surrendered to the German warrior Odoacer (c. 433–493), who became the first Germanic king of Italy. This date marked the end of the Western Roman Empire and its dominance in the Western world.

The emperor was known as the princeps (first citizen) during the first two centuries of the empire. Under this system, called the principate, the emperor consolidated the political power of several offices that had existed under the Republic: He took on the executive functions and imperium (absolute authority) of the consul (chief magistrate) and the religious authority of the pontifex maximus (high priest). Additionally, the emperor was invested with two other types of absolute authority: imperium proconsulare, governorship and command of the provinces, and imperium proconsulare maius, the power to trump any magistrate anywhere in the empire. Over time, the emperor took on all lawmaking authority.

The emperor convened an imperial council (Consilium Principis) composed of the consuls, other magistrates, and fifteen senators chosen by lots every six months, as an advisory committee; however, this body had no policy-making authority.

The Senate acted as the governing council and dominant institution of government. It dealt with foreign embassies, made binding decrees, served as the state’s highest court, and elected urban magistrates; indeed, it even had the power to name the emperor. However, the Senate was stripped of any real political power; it served chiefly to preserve the veneer of the old republican institution. Under Augustus the membership of the Senate was reduced from more than one thousand to six hundred, and over time, its composition reflected the changing empire—the Senate began to include members of the equestrian (or equite) class (a sort of lower aristocracy), as well as representatives from Italy and the provinces. Senators were primarily appointed by the emperor.

One of the hallmarks of the Roman Empire was its extensive system of imperial administration. The progression of magistrates up the political career ladder was known as the cursus honorum. Entry-level officers served on the Vigintiviri (board of twenty) for a term of one year before moving on to higher positions. Officers who were elected quaestor, the next position up the line, were also granted membership in the Senate; these magistrates kept the treasury, maintained public records, or served as provincial governors. In the city of Rome municipal services (such as the grain dole) were handled by a trained professional civil service.

Finally, the vast territories of the Roman Empire were managed by provincial governors. The Senate supervised so-called public provinces, which were administered by governors called proconsuls who were chosen by lot and served for one year. Imperial provinces with significant military forces were considered to be under the direct supervision of the emperor, who hand-picked their governors. Still other imperial provinces were governed by prefects from the equestrian class.

Roman society under the empire was organized according to a hierarchy of social classes. Because these classes were not based solely on birth—wealth and political standing were also important considerations—there was some social mobility. At the top of the hierarchy, of course, was the emperor, his family, and the imperial court. Next came the senatorial elite, whose status was politically based and depended on the favor of the emperor. The status of the equestrian class was largely economically derived, though many equestrians gained social mobility through army service. The equestrians, a class that had emerged during the late Republic, were businessmen who had profited from manufacturing and trade; this class came to dominate the imperial bureaucracy.

On the lower end of the hierarchy were the plebeians, the ordinary citizens of Rome. Individually, the plebeians had little power, but as a group they could have great influence. Recognizing this, Augustus implemented a plan of “bread and circuses”—free grain and popular entertainment such as chariot races and gladiatorial contests—to keep them appeased. At the very bottom of the social order were slaves, freedmen (former slaves), and finally women.

The first great achievement of the Roman Empire, Pax Romana, was notable for what did not occur. From approximately 27 BC to AD 180—the reign of Augustus through that of Marcus Aurelius—the Roman Empire enjoyed relative peace, the longest such period in Western history before or since. During this period Rome prospered economically and culturally and witnessed the construction of several prominent buildings, such as the Colosseum, which was built between 70 and 82. 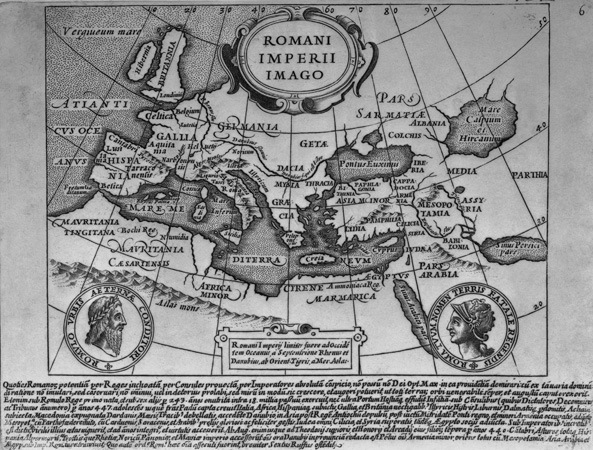 In 395 the vast empire was permanently split into two parts, one centered in Rome and one centered in Constantinople. The Western Empire disintegrated in 476, when Romulus Augustulus was deposed; the Eastern Empire persisted for nearly a thousand years after the demise of its Western counterpart.

The Romans left many legacies for future generations, including a rich body of Latin literature, impressive architecture, and a system of city planning and roads, to name a few. Equally important, modern Western civilization has been greatly influenced by Roman law and the science of public administration first developed under the Romans, who saw the need to manage diverse territories efficiently.