The Byzantine Empire once ruled over a large swath of the Mediterranean world from its base in the city of Byzantium (modern-day Istanbul). Its emperors were absolute, hereditary rulers who relied on a small army of bureaucrats to administer their realm. Out of this emerged a remarkably complex system of government, but that same centralized administration is cited by historians as one of the major flaws that brought about the decline of the Byzantine Empire.

There are varying dates for the founding of the Byzantine Empire; it was never formally established but arose out of the remnants of the Roman Empire, when the Italian peninsula was overtaken by Germanic tribes. The city where it was based was originally called Byzantion, after its king, Byzas, who founded it in 667 BC as a colony of ancient Greece. The Roman emperor who converted to Christianity, Constantine I (d. 337), declared the city to be the “New Rome” and formally moved his capital there in 330. His successors attempted a return to power in Rome, but granted a co-emperor in Byzantium equal powers with them. Out of this rose an imperial court and army that defended the capital—renamed Constantinople in Constantine’s honor—from marauding Huns and other enemies, and then began to conquer surrounding lands.

There was no written constitution that governed the Byzantine Empire because its leaders considered their authority to be divinely bestowed, as summarized in a line written by the emperor Constantine VII (905–959) in the tenth century, “God sets Emperors on the throne and gives them lordship over all,” in his book De Administrando Imperio (On Administering the Empire).

The history of the Byzantine Empire is generally divided into three periods, and significant changes in its governance occurred during each. The Early Byzantine era began with Constantine, when Byzantium became the capital of the Roman Empire. This early period endured until the early seventh century and included several changes implemented by local authorities that were designed to prevent the eastern empire from disintegrating in the way that its Roman counterpart had by 450. These reforms created a stable core bureaucracy that would prevent the empire from decline in the case of a weak or incompetent emperor.

The Middle Byzantine era began in 610 with the ascension of Heraclius (c. 575–641), whose father had been the governor of Byzantine-controlled Africa. He came to power at a time when the Persian army came so close to seizing the capital that residents of Constantinople could see nightly bonfires from the Persian encampments across the Bosporus. Heraclius instituted the themata system, which endured for hundreds of years beyond his rule: the Byzantine Empire was divided into four themes (military districts), each with its own army. They were governed locally by a strategos (military governor), who also had civil duties as well, such as tax collection. The revenues came from farmlands granted to soldiers as part of the themata strategy. The soldiers did not own the land outright—it was considered the property of the emperor and empire—but were granted its use in exchange for a promise that their descendants would serve in the army. This plan served as a bulwark against invaders and guaranteed a permanent standing army for the Byzantine Empire. The individual themes were further subdivided over time, but the first four were Anatolikon (in Anatolia), Armeniakon (Armenia), Thracesion (Thrace), and Opsikion (which provided troops for emperor’s househhold, court, personal army.)

The Late Byzantine era began in 1081 with the emperor Alexius I Comnenus (1048–1118). He came from one of the wealthy landowning families that rose to prominence as a result of the themata system and led military excursions to recover lands lost to the empire’s persistent external enemies. He, too, instituted reforms designed to strengthen the empire from within, most importantly by giving other noble families a greater role at court as a way to reduce the threat these politically active families posed; the century before Alexius’s rule had been marked by tremendous instability on the throne. These other elite families were essentially made members of the royal family by the granting of titles such as sebastokrator (venerable rulers) and panhypersebastos (derived from Greek roots for “all,” “above,” and “majesty”). Until the end of the Byzantine Empire in 1453, every emperor after Alexius was connected to the Comnenus family.

Alexius, Heraclius, and the eighty-plus other emperors ruled as absolute monarchs who inherited their titles through the fortune of their birth. The emperors before Heraclius were called “Augustus,” a continuation of the Roman honorific meaning “majestic.” When Heraclius became emperor, the empire was beginning to shed its Latin terminology; as a result, the emperors carried the title “Basileus” (Greek for “king”). All legislative, executive, and judicial power rested with the emperor.

Christianity was the official state religion, and those outside the church were not considered citizens. These included Jews, who were barred from holding public office. 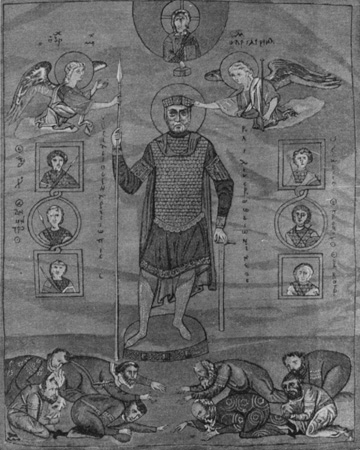 The imperial court in the Byzantine Empire was called the Comitatus. In the early period of Byzantine history, the court included a senate—again, a holdover from its Roman roots—comprising men from the wealthiest families attached to the emperor, but this had no real legislative function. Senior officials at court also included the master of offices, who had several tasks. He was responsible for supervision of the imperial arsenals, oversaw the many translators employed by the court, and began to carry out diplomatic missions on behalf of the emperor as the middle era approached. The sakellarios was the main treasury official, who oversaw disbursements to the armies and to charitable works as decided by the emperor. The city of Constantinople itself was ruled by a city prefect.

The supreme judicial authority in the Byzantine Empire was the emperor, but the rulers delegated those duties to various officials, including the quaestor (head of judiciary) and the minister for petitions. Justinian I (483–565) organized an impressive scholarly effort to compile all known existing laws into the Corpus Juris Civilis, also known as the Codex Justinianus. It collated all existing Roman law, including the decrees of all emperors dating back to Hadrian (76–138).

The Byzantine Empire evolved into a rich, diverse territory that was constantly at war on one of its frontiers. Their foes included the Persian Empire, the Abbasids in Baghdad, the Bulgars in the Black Sea region, and the Pechenegs and other tribes from the Russian steppe. In the relative safety of the capital, the majesty and splendor of the empire was regularly demonstrated through elaborate public pageants and ceremonies involving the emperor and the imperial court. Great works of architecture, such as the Hagia Sophia cathedral, served as the physical embodiment of the empire’s power. To finance the wars, the vast court, artistic patronage, and intensive public-infrastructure projects in the capital and elsewhere, a complex system of taxation evolved over the years, along with a bureaucracy to administer it. In the early period, for example, there was the infamous chrysargyron (gold and silver tax), levied every four years on everyone in the realm, even slaves and animals. Parents were often forced to sell one or more of their children into slavery to meet the obligation, which was finally rescinded by Anastasius I (430?–518) near the end of the fifth century. After that, revenue was derived from the property taxes levied on landowners.

Byzantine emperors inherited their title, and after the heirs of Constantine lost power, a series of other dynasties ruled in Constantinople until the final one, the Palaeologus family. Many of these dynasties boasted at least one formidable female empress, which made the Byzantine Empire a rare world power that allowed women to attain such positions. They included Irene (c. 752–802), who was placed in charge by decree of her husband, Leo IV (749–780), before his death. She attempted to reconcile the Eastern Orthodox Church with its western counterpart in Rome. There were also two Theodoras, one who ruled by similar circumstance between 842 and 855 and her namesake two centuries later, who seized power on her own after having been crowned co-empress. Her death in 1056 ended what had been known as the Macedonian dynasty.

The Byzantine Empire was largely an agricultural economy, and cities other than Constantinople, the capital, failed to develop into centers of any importance. As a result, landowning families rose to power in the provinces and emerged as challengers to the throne. These nobles included the aforementioned Comnenus and Palaeologus clans, as well as the Lascaris family, each of which enjoyed periods of imperial rule.

Several significant events defined the Byzantine Empire during its eleven-century-long history, beginning in 476, when the last emperor in Rome, Romulus Augustulus (fl. fifth century), was forced to give up his authority. For the next three hundred years, the emperor in Constantinople was the sole secular ruler in Christendom, until Pope Leo III (d. 816) crowned the Frankish king Charlemagne (742–814) in Rome in 800. In 620 Heraclius declared Greek the official language of the Byzantine Empire, decisively ending the last of its significant links to ancient Rome. A century later, a controversy over the religious images known as icons erupted, and this pitted the Byzantine emperors, and their local ecclesiastical officials, against Rome; the battle eventually evolved into a much larger one over doctrine and led to the Great Schism in 1054, when the eastern church formally separated from the western church in Rome.

The empire was reaching the height of its power by that point, thanks in part to the leadership of Basil II (c. 958–1025). He led decisive military campaigns against the Muslim Arabs in Syria and then the Bulgar kingdom, and famously ordered fifteen thousand captured Bulgarian soldiers to be blinded. The Slavs were then forcibly marched back to their defeated ruler, Samuel (d. 1014), with every one-hundredth man, who had had just one eye taken out, leading the others. The pitiful sight was said to have caused Samuel to faint, and he died of a stroke two days later. Basil also made an important alliance with the leader of Kievan Rus’, Vladimir I of Kiev (c. 956–1015), who married Basil’s sister with the agreement that he would convert to Christianity and order his people to do so as well.

In 1095 Alexius, who was apprehending the rapid disintegration of his realm, informed Pope Urban II (c. 1035–1099) that Eastern Christians making pilgrimages to the Holy Land were being persecuted, which prompted Urban’s call for a holy war against the Muslims. The First Crusade that was launched later that year, and the other military expeditions that followed, transformed western Europe. During the Fourth Crusade, however, Crusaders sacked Constantinople in 1204, an act that triggered centuries of animosity between the Greek-Byzantine world and the rest of Europe. The city became a battleground for the three religious powers—Eastern Orthodox, Roman Catholic, and Muslim—until 1453, when it was stormed by the Ottoman Turks, who established it as the capital of their powerful empire, which remained intact until 1922.

The Byzantine Empire’s perplexing bureaucracy was so intricately arranged that the word Byzantine became synonymous for something whose inner workings are so complex that they are essentially unknowable to all but a handful of insiders. Despite this pejorative use of the word, the government of the Byzantine Empire served as a crucial bridge between the ancient civilizations of Greece and Rome and the modern world. Its laws, cultural institutions, and artistic heritage all borrowed important elements from antiquity and were later refashioned by successor states in Europe and the Middle East; for example, the Codex Justinianus became a core element of civil law, as opposed to religious law. One final legacy of the once-mighty power can be found on the flags of many modern Muslim nations: the Byzantine Empire was the first political entity to use both the crescent moon and a star as its official symbols.