One of the most commonly held, and perhaps most misunderstood, modern notions about the Middle Ages is the type of romantic or erotic love believed to have been practiced in the period, popularly referred to as "courtly love." Courtly love is a cluster of related ideas and sensibilities characterizing an extreme expression of romantic passion that was demonstrated frequently by characters in medieval literature, especially in courtly romances and the love lyrics of the French troubadours and the German minnesingers. The term "courtly love" was never used in medieval texts, although medieval authors and poets did use the term fin'amors (refined love) to describe the extremes of emotion experienced, often suffered, by male protagonists in romances and by the lover singing love songs to his beloved in the lyric tradition. After observing the phenomenon depicted in various romances, the French literary historian Gaston Paris coined the term "courtly love" at the end of the nineteenth century to describe the devotion of knights for their ladies in medieval romances and love poetry, and the term took on a life of its own. Many general discussions of medieval literature now treat the "courtly love" experienced by various romance heroes—Chrétien's Lancelot, Chaucer's Troilus, or Dante's narrative persona in his ostensibly autobiographical lyric collection La Vita Nuova—as if the authors themselves used the term. In fact, although medieval authors never call what they are describing "courtly love," this particular construction of heterosexual love has a long literary history. It is not surprising that the Middle Ages would embrace a variety of love discourse that has such antique, and therefore authoritative, origins.

THE ORIGINS OF COURTLY LOVE.

The origins of this form of extreme love can be traced to the Roman poet Ovid, one of the most highly regarded "authorities" in the Middle Ages, whose Ars Amatoria (Art of Love; 1 B.C.E.) contributed many of the tropes now familiar Page 167  |  Top of Article as "courtly love." These include the idea of love as a kind of warfare between the sexes, in which every lover is a soldier in the army of love over which Cupid is the commander-in-chief, and the notion of the absolute power of women over men, who are afflicted by a form of madness because of which they undergo various hardships and physical sufferings and practice absurdly exaggerated behavior. Another likely literary source of more contemporary vintage was The Dove's Neck Ring, produced in Muslim Spain (1022) by Ibn Hazm, who was influenced by Platonic ideals about love. Hazm's contributions to the discourse of courtly love include the notion that man reveals and improves his character or good breeding by practicing a chaste (rather than sensual) love. This rarefied love produces an ennobling effect on the male lover, changing a man of humble birth to the equal of the noble lady to whom he aspires. According to Hazm's version of neo-Platonism, true love is a reunion of parts of souls that were separated in the creation.

But what exactly was the late medieval European phenomenon known popularly as "courtly love"? This medieval pattern of erotic behavior was really a cult of frustrated longing. It involved the male lover's unfulfilled sexual desire for a female love object—an unattainable, extremely beautiful and perfect courtly lady, whose very inaccessibility (because she is married to someone else, often the lover's lord) makes her more attractive to the lover. Thus, for the male lover, the essence of the experience of love is a paradoxical combination of pleasure and pain. He experiences joy at the sight of the beloved whose proximity brings delight; at the same time he endures intense mental and physical suffering—a host of disorders including chills, fevers, aches, insomnia—experienced simultaneously with the pleasure. This paradoxical combination of pleasure and pain is caused illogically by the fact that despite her very nearness, the lover cannot have her. In this topsy-turvy situation, the courtly lady is the "physician" who is both the cause and the potential cure of the courtly lover's painful frustration. Because they often involved marital infidelity on the part of at least one of the pair, courtly love relationships had to be conducted with the utmost secrecy. This necessitated clandestine meetings between the lovers, which ended at dawn, thus giving rise to the lyric genre of the aubade or "dawn song." Secrecy and physical separation inspired acute bouts of jealousy in both parties, all part of the phenomenon's allure. Because the attainment and practice of courtoisie (courtesy) was limited to the aristocracy, courtly love was only to be practiced by the most elite classes of medieval society, 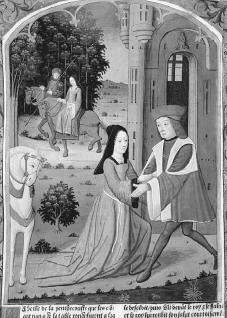 Lancelot embracing Guinevere; Chrétien de Troyes, Lancelot, Italy. Turin. Biblioteca nazionale. MS L. I. 3 (1626), 15th century. © ARCHIVO ICONOGRAFICO, S.A./CORBIS. REPRODUCED BY PERMISSION. the knights and ladies at the aristocratic courts. Indeed, when a knight was attracted to the beauty of a peasant woman, he was instructed simply to take her by force if she did not immediately succumb to his flatteries, a plot situation illustrated in the lyric genre of the pastourelle.

Although no concrete evidence exists that the fantastic courtship known as courtly love was actually practiced during the medieval period, this erotic fantasy or game nevertheless had much literary currency from the twelfth century onwards, when the wife of King Louis VII of France, Eleanor of Aquitaine, and their daughter Marie reputedly set up "courts of love" respectively at their estates in Aquitaine and Champagne. Both Eleanor and Marie were literary patronesses of troubadour poets and romance writers, and, through their encouragement, the discourse of courtly love as we know it took shape. At Marie's request, Chrétien de Troyes wrote the unfinished romance, The Knight of the Cart, about Lancelot's courtly desire for Guinevere, and at her court another cleric, Page 168  |  Top of Article Andreas Capellanus, wrote his Ovid-influenced treatise De Amore (About Love) also titled De Arte Honeste Amandi (About the Art of Frank Loving; 1180s), a three-part "guide" to conducting courtly love addressed to a young man named Walter. Andreas's first two books present the rules of the game—what rank the lovers must be and how they must conduct themselves. Ironically, his third book, containing a vehement repudiation of secular love and a misogynistic attack on the vices of women, retracts all the advice offered previously. Placed on the proverbial "pedestal" above the reach of the courtly lover by his frustrated yearning for her, the courtly lady of the first two books enjoyed a position of power that few actual medieval women (except for queens and countesses

INTRODUCTION: In Book Two of De arte honeste amandi [The Art of Courtly Love], written in France under the patronage of Marie de Champagne in the late twelfth century, Andreas Capellanus (Andrew the Chaplin) enumerates rules for love that mix the cynicism of Ovid's Art of Love with the elevated or idealized love of the type called "courtly." This love is manifested by certain conditions such as the married state of the lady, and physical symptoms, such as fainting, palpitations of the heart, or changes of color on the part of the lover. How often these rules were applied in real life is uncertain, but they were highly influential in the development of medieval literature.

Book Two: On the Rules of Love

like Eleanor and Marie) ever experienced. And even queens, subject to the temporal power of their husbands, could be locked in towers, which happened to Eleanor herself when her second husband, Henry II grew tired of her meddling in his political affairs. Knocked off the "pedestal" of adulation, the courtly lady instead returned to being the object of medieval antifeminism more typical of the period's attitudes toward women.

Mary Frances Wack, Lovesickness in the Middle Ages: The Viaticum and Its Commentaries (Philadelphia, Pa.: University of Pennsylvania Press, 1990).