FOOD ARCHAEOLOGY. As part of their general research, archaeologists have long been interested in food remains under the rubric of diet and subsistence. This work contributes to understanding the long-term historical development of food, and its impact on cultures. Recently, there has been increased interest in food archaeology (although it is not yet identified as a separate discipline), fueled by new technologies and curiosity about implications that go well beyond diet to the role food played in social organization, and ultimately, in the development of civilization itself.

As in all archaeology, there are essentially two broad periods that are of interest to researchers. The first is prehistory, before written records were kept. For that time, scholars are wholly dependent on the interpretation of archaeological finds. The second period is historical archaeology, during which literary and written sources, including poetry, frescoes, and government record-keeping, have been retrieved. Comparisons of excavated food remains with records is particularly valuable because the finds may either contradict or augment the historical record. For example, at the site of a former Roman villa on the Greek island of Lesbos, 7,300 animal bones from a wide variety of species, including goat, deer, hare, pheasant, capon, boar, suckling pig, sheep, lamb, starling, and woodcock, confirm contemporary reports of lavish banquets.

Direct evidence of diet consists of preserved food remains, both plant (paleoethnobotany) and animal (zooarchaeology); analysis of human bone and teeth; undigested stomach contents; and coprolites (fossilized feces). Collection and analysis of plant remains is often futile because most decay. If, however, they have been charred (burned), perhaps during a cooking accident, the material is preserved indefinitely. To collect and isolate tiny floral fragments, samples of excavated sediment may be placed in a flotation tank through which water is forced electronically, forcing the buoyant seeds, pollen, and grains to the surface. Once salvaged, these items can be dated by the system known as radiocarbon dating, based on carbon's known rate of very slow decay. Tiny grains of manioc, yams, and arrowroot from an ancient settlement in Panama, Central America, have been carbondated to five thousand to seven thousand years ago, providing the earliest evidence of cultivation of root crops in the Americas.

Microscopic examination of charred plant remains can also determine whether they were cultivated or wild, indicating whether the society was agrarian or hunter-gathering. Charring leaves silica ghosts of the epidermal cells that when examined under the electron scanning microscope reveal telltale markers that distinguish between domesticated and wild crops. Such investigation of grains, husks, and plant remains in China helped push back the date for earliest domestication of rice from 8,000 to 11,500 years ago, and pinpointed the location to the middle Yangtze River.

The more recent technique of DNA "fingerprinting" offers an alternative for establishing domestication. When applied to einkorn wheat, one of eight "founder crops" that launched agriculture in the fertile crescent of Page 679  |  Top of Article the Middle East around 9000 B.C.E., the method pinpointed earliest domestication to the Karacadaq mountains of southeast Turkey.

Human bones provide a wealth of clues about diet. Isotopic analysis of collagen can distinguish chemical signatures of foods. It becomes possible to determine proportions of land to marine foods in the diet, for example, and even to demonstrate the relationship of nutrition to social class. Excavation of skeletons at the former Mayan city-state Caracol in Mexico established that the upper classes, living in the city center, consumed the best diets. The worst were documented in the surrounding inner-city slums while diet improved in the outlying "suburbs," proof that socioeconomic class and nutrition were related even this early.

Diet may also be inferred indirectly by examining the context of food remains, the environment in which they were found: pottery with grain impressions; eating, drinking, and storage utensils with food residues; hearths where charred grain is found; and gravesites where cut or charred bone indicates funeral feasting. Chemical analysis of food residues from eating and drinking vessels, a technological advance, has provided detailed information about the ingredients used to make a dish. University of Pennsylvania archaeologists pioneered the use of infrared spectroscopy, gas liquid chromatography, and gas chromatography mass spectrometry to examine remains on cups and plates from the 2,700-year-old tomb of the legendary King Midas located in Turkey. Analysis of the protein and lipids allowed scientists to conclude that the menu for this royal funerary feast included barbecued goat or lamb; lentils in olive oil; honey and wine spiced with fennel and anise; and an alcoholic drink composed of grape wine, barley beer, and mead.

Gravesites typically yield a wealth of information. Since Neolithic times, people have been buried with food for the afterlife. Less often, people are buried in food. In a prehistoric Iron Age (500 B.C.E. to 500 C.E.) cemetery at Noen U-Loke in northeast Thailand, archaeologists found a huge sample of carbonized rice, much used in burials, "rice beds" in which some citizens were laid to rest on layers of rice, and then covered over with more. Finally, the "bed" was set on fire to purify the grave. Rice burials have been found nowhere else in the world. Since these graves also contain lavish jewelry and bronze goods, they indicate that the burial practice was reserved for those of special rank. It can be also deduced that the community produced a tremendous rice surplus under the distribution control of a chieftain, who wielded power over the rice farmers or producers.

Also of interest are containers in which food was stored and shipped. Often these were clay jars known as amphoras, ubiquitous throughout the ancient world for 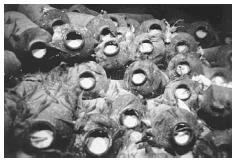 The recovery of food from archeological sites is one of the most challenging of all tasks due to the fragile nature of the remains. The stakes are raised when the food is buried in jars under the sea, as in the case of these Phoenician amphorae that sank with a ship during a storm about 750 off the coast of what is now Israel. Vestiges of the contents proved that the amphorae once held wine. They are shown here in an underwater photo released by National Geographic in 1999. © AFP/CORBIS carrying olive oil, fish sauce, olives, fruit, and wine. Excavation at the fortress Masada in Israel has turned up Roman amphoras with wine residues bearing the inscription "For Herod of Judea" (73–4, r. 37–4, B.C.E.), indicating that this potentate favored Italian vineyards.

Another aspect of food archaeology is culinary archaeology, the study of food preparation and utensils. Rice steamers have been recovered from Noen-U Loke in Thailand and other locations. Sophisticated techniques even make it possible to identify the temperature at which an ancient meal was cooked. When Lindow Man, a body discovered in a British bog, was retrieved, the charred bran-and-chaff stomach contents were subjected to electron spin resonance, capable of measuring the highest temperature to which a material has been subjected and for what length of time. The conclusion: the meal was probably a griddle cake, cooked on a flat, heated surface for about half an hour at 392°F (200°C).

Occasionally, archaeologists unearth actual charred meals, most notably at Pompeii and Herculaneum, covered by ash when Mt. Vesuvius erupted in 79 C.E. There, inhabitants left complete meals on tables, food in shops, and loaves of bread in bakery ovens. The Egyptian priests at the Temple of Isis in Pompeii were eating a meal of fish and eggs when the eruption occurred. Researchers at Pompeii have taken their work a step further to investigate how the Romans, master urban planners, incorporated growing, processing, distribution, and storage of food and drink into the city layout. By measuring distances from dwellings to restaurants and bakeries, they Page 680  |  Top of Article can determine how far a citizen had to travel to quench his thirst or get something to eat.

After excavating artifacts (manmade objects) and subjecting them to laboratory analysis, the broader task is to document processes of cultural change such as the beginning of agriculture in a particular area. Food plays a critical role in the development of civilization and culture. The problem of subsistence must always be solved first before a food surplus can be generated, the population expands, and there are the beginnings of a ranked society with some elite members engaging in ruling, military activities, directing religion, and craft making. It is food that propels the development of ever more complex societies.

Renfrew, Colin, and Paul Bahn. "What Did They Eat?" In Archaeology: Theories, Methods and Practice. 2d ed. New York: Thames and Hudson, 1996.