Evading Conscription. Transgressions against the state were severely punished in ancient Egypt, with evading conscription being the most serious crime that peasants could commit. Papyrus Brooklyn 35.1446, Middle Kingdom (circa 1980-1630 B.C.E.) records from the Great Prison of Thebes, listed the specific crimes and punishments of those who evaded their work for the state. The Egyptians differentiated between failure to arrive at work and flight from a place of work. Two different crimes were recognized; four different laws were made regarding them. The four separate laws included “the law concerning deserters,” “the law concerning deliberate desertion for six months, “the law concerning deliberate desertion from work,” and “the law concerning the man who runs away without doing his duties.” These crimes were so serious that they were investigated through the Office of the Vizier (prime minister). Whether the vizier himself gave judgments is not known. But a scribe of the vizier’s office confirmed the sentence that was given to the guilty.

Ramifications. The punishments for these crimes were severe. The family of the offender was forced to fulfill his duties as a conscript for an indefinite period of time while the criminal performed state labor in the Great Prison. Each prisoner’s case was reviewed after ten years of servitude. In seventy-eight of eighty cases known from the Brooklyn papyrus, the prisoner was then released. The other two prisoners were condemned to life in prison.

Tomb Robbery. There is reason to believe that tomb robbery was a problem in all periods of Egyptian history. Certainly all Egyptians knew that the tombs of the nobles were filled with valuable objects. The only documentation of an investigation and trial for tomb robbery comes from Dynasty 20 (circa 1190-1075 B.C.E.) in Years 16 to 18 of Ramesses IX. A group of documents in the British Museum in London and the Egyptian Museum in Turin preserved trial transcripts for a series of tomb robberies committed in western Thebes by workers from Deir el Medina. High officials assisted in the commission of these crimes and benefited from the sale of the stolen goods.

Targeted Items. The tomb robbers of Dynasty 20 were active in royal tombs of Dynasty 17 (circa 1630-1539 B.C.E.), in mortuary temples, and in the Valley of the Queens. The papyri describe how the robbers located tombs and the way that they unwrapped mummies and 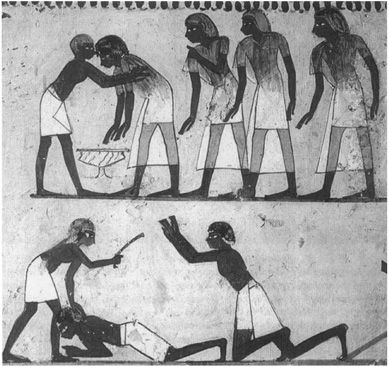 Painting from the Theban tomb of Menna, Sheikh Abd el-Qurna, showing a delinquent farmer being shaken by a tax collector while another farmer is being beaten with a stick, circa 1539-1295/1292 .

removed amulets made of precious metals and removed other valuable objects from tombs.

Preventive Measures. The extant papyri do not specifically discuss problems in the Valley of the Kings. However, shortly after the incidents discussed in these papyri, the priests of the necropolis relocated the mummies of the New Kingdom (circa 1539-1075 B.C.E.) kings to a common tomb. They remained protected there until the late nineteenth century, when they were removed to the Egyptian Museum in Cairo.

Assassination. The evidence for assassination in Egypt remains vague. The possibility that a person could murder the king would contradict the official ideology that he was at least semidivine. Thus, the hints of assassination plots found in Egyptian texts are veiled and difficult to interpret. The Instructions of Amenemhet I, a Dynasty 12 (circa 1938-1759 B.C.E.) wisdom text, warned in this king’s voice that the price of trust for a king was death. It also seems to describe an attempt against the king’s life.

Ramesses III. More detailed information on assassination dates to the reign of Ramesses III (circa 1187-1156 B.C.E.). A series of badly preserved papyri provide details on a plot against this king that originated among his wives and sons. Whether the plot involved murder or was an attempt to influence the succession in the favor of Prince Pentaweret rather than Prince Ramesses, the designated successor, is unclear. The price paid by the approximately forty plotters was death. Some of the higher-ranking plotters were given permission to commit suicide while others were killed. The reasoning behind this distinction is not clear from the evidence.

Name Changes. One culturally specific punishment for the plotters was changing their names so that their identity would be obliterated. One conspirator, for example, was called “Re hates him” in the trial transcript, probably a change from the more common Egyptian name Meryre (“Re loves (him)”). This punishment would have been serious for an Egyptian who hoped to live forever.

Judicial Oracles. Judicial oracles included the gods in a verdict. At Deir el Medina, the magistrates carried a statue of the Divine Amenhotep I before the assembled litigants. They then posed a yes or no question to the statue, asking if “x” were right and if “y” were wrong. The men carrying the statue then moved either forward or backward. This movement demonstrated that the god concurred with the verdict the court had reached. Judicial oracles were included in questions of real estate and tomb occupancy. These disputes included the interests of the government since houses and tombs at Deir el Medina were state property. Thus, the court asked the state god of the village to confirm a verdict rather than decide it independently. These oracles were not “fixed” but were instead a religious ceremony to confirm the verdict.

Harsh Penalties. Punishment for crimes committed against the state was harsh. Common punishments included one hundred to two hundred blows with a stick, one to five open wounds, mutilation of the nose or ears, and terms of forced labor. The death penalty, however, was rare. It was reserved for assassination of the king, tomb robbery, and official corruption. Loss of office was a common punishment for a variety of administrative misdeeds. This sentence was a double punishment since it also meant loss of the office to the criminal’s son. Forced labor also meant that the whole family of a convicted criminal was put to work for periods of either ten or twenty years.

Means to an End. Torture was used to gain confessions to crimes. Torture victims also were forced to name accomplices in crimes, to reveal the hiding place of stolen goods, and to describe the methods used in a crime. Information on methods allowed the authorities to strengthen security measures. The most common torture was the bastinato, beating the bottom of the foot with a stick.

John A. Wilson, The Culture of Ancient Egypt (Chicago: University of Chicago Press, 1956).