Literally translated as "way of the warrior," Bushido evolved into a clearly defined ethical system of the bushi, or warrior class of Japan, during the seventeenth and eighteenth centuries; the term first appeared in the Kōyō gunkan in about 1625. In his 1899 Bushido: The Soul of Japan, Nitobe Inazō, the first to articulate the concept in English, enumerated seven essential values of the warrior class: justice, courage, benevolence, politeness, veracity and sincerity, honor, and loyalty. More recently, Page 252  |  Top of Article 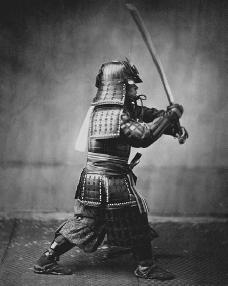 Samurai warrior, photographed c. 1860 by Felice Beato. Bushido, the samurai code of ethics, was formalized in writing in the sixteenth century and adhered to for some three hundred years. Bushido placed emphasis on certain chivalrous virtues such as loyalty, courage, and courtesy. © HISTORICAL PICTURE ARCHIVE/CORBIS Bushido has been credited with fueling Japanese atrocities in World War II, through "the unassailable rule that death is preferable to dishonour" (Edwards, p. 5). In fact, neither of these popular conceptions accurately represents the codes of warrior behavior that developed over the course of six centuries.

The Warrior Governments of Japan

In 1192 Minamoto Yoritomo established the first bakufu, or "tent government," to counter the growing inability of the imperial family and aristocracy to control the provinces. From that time until the Meiji Restoration of 1868 Japan was governed by its warrior class.

Yoritomo's Kamakura government was later idealized as the warrior's "Golden Age," when "selfless loyalty unto death" characterized relations between warlords and their samurai retainers. Modern scholarship has uncovered a different picture, however. According to Dr. Karl Friday, "From the beginnings of the samurai class and the lord/vassal bond in the eighth century to at least the onset of the early modern age in the seventeenth, the ties between master and retainer were contractual, based on mutual interest and advantage, and were heavily conditioned by the demands of self-interest" (p. 342). There was no single prescriptive code of behavior; instead each warrior clan had its own behavioral norms, sometimes listed in formal "house precepts," or kakun, or in admonitory epistles to a lord's heirs and retainers.

These early warrior documents varied considerably—some had a decidedly Buddhist cast, others insisted on a thorough education in the arts, while still others advised a single-minded focus on strategy and skills for battle. Some were written in a highly stylized Chinese form; others were composed in a more natural Japanese manner. The Chinese-influenced theme of balance between bun (literature) and bu (martial skills), bunbu ryōdō, appears frequently. So do the reciprocal admonitions of loyalty to the lord and benevolence toward retainers. Maintaining martial skills is so important that Shiba Yoshimasa writes, "Insofar as martial arts are concerned, it goes without saying that one should practice …" (Hurst, p. 218).

From War to Peace

Prior to the Edo period (1600–1868), the primary function of a warrior was to fight. Writing about how to behave as warriors was of less immediate concern than actual battlefield skills. Tokugawa Ieyasu changed all that, through the unification of the country and his establishment of the third and final bakufu in 1603. Suddenly the bushi, who had been engaged in almost continual warfare for one hundred years, were left without any battles to fight. By the eighteenth century, the gap between name and role had widened to the point that the bushi experienced a full-fledged identity crisis. The samurai were now primarily administrators and bureaucrats searching for an understanding of their proper role in a warless age.

Unlike their predecessors, who had been writing for fighting men and clan leaders, thinkers such as Yamaga Sokō and his student Daidōji Yūzan wrote about Bushido in an attempt to define and encourage behaviors that would distinguish warriors from the other classes of farmers, artisans, and merchants. Incorporating a more traditional Confucianism than the state-favored Neo-Confucianism, Yamaga argued that the primary duty of the warrior was to serve as an exemplar for the rest of society, through deeply cultivated sincerity of action.

Yamamoto Tsunetomo, in the Hagakure, saw a very different purpose for the eighteenth-century warrior—"The Way of the Samurai is found in death" (p. 17). This anachronistic view—warriors had not died in battle for more than a century—is frequently misunderstood. In order to control the armed warriors, Tokugawa Ieyasu established a series of inviolable laws; these at times came into conflict with the warrior's individual loyalties or sense of honor. In particular, both parties in any conflict between samurai were to be punished equally; in this context, Yamamoto urged that if warriors were forced to break the Shogun's law they might as well fight to the death.

The values of the bushi, both actual and idealized, have permeated all levels of Japanese society. In the Edo period, members of the merchant class deliberately adopted samurai standards of behavior to identify themselves more closely with Page 253  |  Top of Article the ruling class. After the Meiji Restoration, unemployed samurai became doctors and educators, and brought their written codes with them. The Imagawa kabegaki, by the fourteenth-century poet-warlord Imagawa Ryōshun, was even used as a textbook in Edo-period schools. During the years prior to the Meiji Restoration, the samurai's spirit of sincerity in action, loyalty, and self-sacrifice allowed them to take leadership in the revolt that would lead to the abolition of their class.

Bushido's most tragic legacy is the warped version ultranationalists used in formulating propaganda to encourage and sustain the Japanese solider before and during World War II. The spirit of the Hagakure incited young Japanese men to become kamikaze suicide pilots; death was promoted as preferable to surrender.

In the early twenty-first century the term Bushido appeared more frequently in English-language martial arts publications than it ever did in early warrior texts. And even though Nitobe's list of virtues was not directly derived from actual warrior codes, it did reflect romanticized warrior ideals that the rapidly modernized Japanese recognized as noble and found comforting to call their own.

Yoshisadaki (The records of Yoshisada, c. 1338), attributed to Nitta Yoshisada

Hagakure (In the shadow of leaves, 1716), by Yamamoto Tsunetomo