Military organization that defended the Ottoman Empire and helped establish the Turkish republic.

The origins of the modern Ottoman army date to the destruction of the janissaries by Sultan Mahmud II (June 1826). Mahmud then laid the foundation for a new military organization based on Western models. Its centerpiece was a European-style infantry corps, the Trained Victorious Troops of Muhammad (Muallem Asakir-i Mansure-yi Muhammadiye, Mansure for short). Other military services—cavalry, artillery, and transport—were established mainly by reforming existing military units. Mahmud also created a modern corps of imperial guards out of the Bostanci corps, which had guarded imperial palaces.

There also were attempts to centralize the command structure. The authority of the commander in chief (ser asker) of the Mansure was gradually extended over the other services and branches. Thus his headquarters (Bab-i Ser Asker) gradually came to combine the roles of a ministry of war and general staff, and eventually was in charge of all land forces.

Under Mahmud II the military engineering schools were rejuvenated and reformed. He also established a military medical school (1827) and an officer school (1834). Russia and Britain sent military instructors. Most useful services were rendered by a Prussian military mission that grew from one officer (Helmuth von Moltke) in 1835 to twelve in 1837.

In the 1830s Mahmud sought to strengthen the army. Large permanent units with regular commanding officers and staffs were formed. In 1834 a provincial militia (redif) was established to provide reserve forces. However, the commissary system could not support the rapid increase of the military. Epidemics were rife, and over a quarter of all recruits succumbed to disease. Desertion was very common. Although the army had been successfully employed as an instrument of coercion and centralization, as a military force it remained relatively small and poorly organized, trained, and equipped. By the end of Mahmud's reign there were only some 90,000 men in all the services. The wars with Russia (1828–1829) and with Muhammad Ali's Egypt (1831–1833, 1839) resulted in heavy losses and the disruption of the army's development. 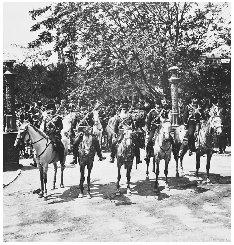 The horsemen of the Ottoman Empire's Imperial Calvary were considered excellent horsemen and skilled warriors, c. 1880s. © MICHAEL MASLAN HISTORIC PHOTOGRAPHS/CORBIS. REPRODUCED BY PERMISSION.
laid in the previous era. The Bab-i Ser Asker continued to acquire new departments. The army steadily grew, and recruitment and training improved. In 1843 the army, renamed the Regular Imperial Troops (Asakir-i Nizamiye-yi Şahane, Nizamiye for short), was organized in permanent territorial commands, each consisting of an army corps (ordu) under a field marshal (müşir). The field marshals, directly responsible to the ser asker, had wide jurisdiction in all military matters. This limited the provincial governors' ability to intervene in military affairs, and was intended to centralize further the military organization and strengthen the authority of the ser asker. Five territorial army corps were established, with headquarters in Istanbul, Üsküdar, Monastir, Sivas, and Damascus. In 1848 a sixth corps was established with headquarters in Baghdad. In 1849 the Nizamiye had some 120,000 men and the redif, 50,000. With local and semiregular organizations, the empire's land forces numbered some 250,000 men.

The reign of Abdülaziz (1861–1876) witnessed considerable increases in military appropriations and improvements in the army's equipment andPage 1739  |  Top of Article training. Modern weapons were purchased abroad, mainly from Germany, and with them came German military instructors. Since the majority of the officers were poorly educated, in 1855 the army initiated its own network of schools to prepare youths to become soldiers and officers. In 1867 over 8,000 students were enrolled in these schools.

In 1869 the army was reorganized into seven territorial corps, with headquarters in Istanbul, Shumla, Monastir, Erzurum, Damascus, Baghdad, and Sanʿa in Yemen. Each corps was required to have some 26,500 men. During the Russian war of 1877–1878 the Ottoman army had some 500,000 men, of whom some 220,000 took the field. During this period the Ottoman Empire reemerged as an important military power in southeastern Europe and the Middle East. Its army performed well during the Crimean War (1853–1856) and in the early stages of the Russian war of 1877–1878. In the latter conflict, however, the Ottomans were out-classed by the superior Russian army.

Under Abdülhamit II (1876–1909) the army benefited from ever increasing allocations, improved recruitment and training, and modern weaponry (mostly from Germany). It received assistance from a German military mission led by Kolmar von der Goltz (1883–1896). At the same time, however, Abdülhamit weakened the authority of the ser asker and placed military affairs under the supervision of permanent commissions staffed by his confidants. He personally approved the appointment and promotion of officers, and established networks of informers throughout the army.

By the 1890s the officer corps had become rife with discontent and sedition. The great expansion of the military had brought growing numbers of young officers from classes whose loyalty to the regime was not unconditional. Furthermore, the officers were better educated, and many espoused liberal ideals. In addition, officers and men were poorly paid, with salaries usually months in arrears. Finally, throughout most of Abdülhamit's reign the army was employed, with little success, in suppressing national and ethnic uprisings as well as lawlessness, especially in Macedonia and eastern Anatolia. Many officers, frustrated by the growing numbers of casualties, believed that the government was either unwilling or unable to provide the necessary means to restore order and protect the empire's territorial integrity. This led many officers, especially in the junior and intermediate ranks, to join the Young Turk movement, which called for the overthrow of Abdülhamit. The Young Turk Revolution (July 1908), which restored constitutional government and led, a year later, to Abdülhamid's deposition, began as a mutiny in the Third Army Corps, based in Macedonia.

In the following years, the Young Turk regime provided the army with increased allocations, modern weapons, and another German military mission, led by Gen. Otto Liman von Sanders (November 1913). At the beginning of World War I, the Ottoman army had some 640,000 men. During the war the Ottomans mobilized an estimated total of some 4 million men. Although the army was plagued by problems of logistics and command, it generally fought well and was successful, especially in Gallipoli (1915–1916) and in Iraq (1915–1916), and in defending Anatolia from foreign invasion following the war. In the end, however, the army could not save the empire from final collapse. Nevertheless, as the institution that had benefited more than any other from reform and modernization, it played a crucial role in the rise of the Turkish republic.

Ralston, David B. Importing the European Army: The Introduction of European Military Techniques and Institutions into the Extra-European World, 1600–1914. Chicago, 1990.