"The priest began to tell stories about the uncertainty of this life and the retributions of the life to come. Genji was appalled to think how heavy his own sins had already been.… But immediately his thoughts strayed to the lovely face which he had seen that afternoon; and longing to know more of her he asked, 'Who lives with you here?'"

The writing of novels, extended works of fiction written in prose rather than poetry, is a relatively recent development: Giovanni Boccaccio's Decameron (1353; see box), which is considered by some to be one of the first "novels," was not really a novel but a collection of short tales. Among the earliest works typically recognized as novels were Gargantua and Pantagruel by François Rabelais of France (c. 1495–1553), Don Quixote by Miguel de Cervantes of Spain (1547–1616), and Pilgrim's Progess by John Bunyan of England (1628–1688). Yet many centuries before these men, the first novel in history made its appearance. Its author was not a European—nor was she a man.

She was Murasaki Shikibu, author of the Tale of Genji. Much about her life is a mystery: historians do not even know her real name. But perhaps the key to her deepest thoughts lies in a character from her strangely engaging tale. That character is not Genji, the lusty hero, but his favorite among his many ladies: a sensitive, gentle soul named Murasaki.

Prior to the late Middle Ages, writers of tales—for instance, the ancient Greek poet Homer in the Iliad—tended to write in verses, whereas later authors would use the prose narrative format familiar to all readers of novels today. In this regard and many others, the work of Giovanni Boccaccio (boh-KAHT-choh; 1313–1375) is significant. His early writing used verse forms, as had the work of his distinguished predecessors Dante (see entry) and Petrarch; later, the Decameron, by far his most well-known piece, used prose narrative in the form of 100 short tales.

Boccaccio was the illegitimate son of a merchant who legally adopted him and took over his care when he was seven years old. From age fourteen, he lived with his father in Naples, a sunny port city in the south of Italy that to Boccaccio's mind seemed to throb with a spirit of adventure. His father intended him to study banking, but Boccaccio had other interests in mind: one was writing, and another was the opposite sex. As Dante had Beatrice and Petrarch had Laura—in both cases, women the poets hardly knew, but worshiped from afar—Boccaccio had Fiammetta, who in reality may have been the daughter of the king of Naples. It is also possible that Boccaccio, unlike the other two poets, had a genuine relationship with the object of his desire; but it is difficult to separate truth from Boccaccio's romantic tales.

By his early twenties, Boccaccio had already demonstrated great talent as a storyteller. He was only twenty-seven in 1340, when he left Naples for Florence, farther up the Italian peninsula, but he had already completed three extended tales in verse. At first he was not happy in Florence, but as he produced book after book, he established himself as the leading author of his time.

The city of Florence, like much of Europe, was devastated by the Plague, or Black Death (1347–51), which wiped out a huge portion of the population—including Boccaccio's father and stepmother. As painful as the Plague was for him, however, it also resulted in the writing of the Decameron (1353). In the latter, a group of seven young women and three young men escaping the Plague flee the city and 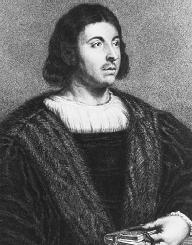 Giovanni Boccaccio. Reproduced by permission of the Library of Congress.

amuse themselves by telling 100 tales, mostly about love. What sets the Decameron apart from much of the literature that preceded it is its natural, everyday tone, which would later have a profound influence on Geoffrey Chaucer (see entry on English Scholars, Thinkers, and Writers).

Boccaccio himself seems to have considered the Decameron a work of little significance when compared to his many other writings both before and after the 1350s. It appears, however, that Boccaccio sometimes showed poor judgment and had trouble estimating the proper worth of something. He was not always wise in his choice of friends, for instance: he remained impressed with Niccolò Acciaiuoli (aht-chy-WOH-lee), who he had known from his early days in Naples, despite the fact that Acciaiuoli often let him down. The two often quarreled, yet Boccaccio remained dedicated to Acciaiuoli.

Boccaccio also had at least one falling-out with Petrarch, who he first met in September 1350; ultimately, however, the two giants of Italian literature patched up their differences. From the early 1360s, Boccaccio lived quietly in his hometown, Certaldo, where he devoted his time to friends, politics, and literature. Having produced numerous works other than the Decameron, including a biography of Dante, Boccaccio died four days before Christmas in 1375.

The meaning of her name

In early medieval Japan, surnames or family names were uncommon, and often a daughter was identified by the title of her father or another powerful man in her life. Shikibu was the title of Murasaki's father, who served in the court of the Japanese emperor. This would be equivalent to a girl being called "doctor" or "lawyer." As for Murasaki, which meansPage 267  |  Top of Article "purple," this was a complex pun of a type familiar in China and Japan, which at that time bore a heavy Chinese influence.

Purple is one of the colors of the wisteria flower, whose symbol in the Chinese system of writing made up the first syllable of the name Fujiwara ("wisteria plain.") Fujiwara was the name of the most powerful family in Japan, whichPage 268  |  Top of Article since the mid-600s had been the real power behind the imperial throne. Through marriage and other alliances, the Fujiwara—more of an extended clan than a mere family—had made their influence felt far and wide. Murasaki's father, Fujiwara no Tametoki (tahm-uh-TOH-kee) belonged to a minor branch of the powerful clan, and his position as a lowranking official reflected that fact. Therefore by giving his daughter a name that suggested that of the Fujiwara, Murasaki's father was establishing a subtle link between her and the great family tradition that preceded her.

The father's rank was low in a relative sense, of course: he was still a part of the imperial court in the capital city of Heian (hay-YAHN; now Kyoto), which gave its name to the period in Japanese history from 794 to 1185. The upper classes of Japan during this time put a high emphasis on cultural refinement, which they equated with a knowledge of Chinese ways. Thus the father, following in the footsteps of his own father and grandfather, built a reputation for himself with his mastery of Chinese philosophy and literature.

Murasaki, too, had a great knowledge of, and appreciation for, the Chinese classics. This knowledge was unusual at a time when girls were expected to learn arts such as embroidery while the men busied themselves with more mentally challenging pursuits. As a matter of fact, Murasaki proved to be better at writing in Chinese than her brother, and she and her father developed a special bond over this shared love. Often she would quote to him from the Chinese histories, or compose poetry in imitation of one Chinese master or another.

The Tale of Genji

In 996, when she was about eighteen years old, Murasaki's father took a post as governor of a distant province, and Murasaki went with him. Two years later, however, she returned to Kyoto to marry a man of the Fujiwara clan who was nearly as old as her father. Fujiwara no Nobutaka already had children by other women, and was known as a demanding man, but their marriage seems to have been aPage 269  |  Top of Article happy one. In 999, she gave birth to a daughter, Kenshi, who later grew up to be a poet herself. Soon after the birth of Kenshi, Murasaki's husband died in an epidemic.

No doubt to comfort herself in the face of her loss, Murasaki now returned to her early love of writing. In about 1002, she began work on a story concerning the adventures of a hero named Genji ("the shining one"). This was the beginning of what became Genji monogatari, or the Tale of Genji, which she completed some two years later.

Murasaki's Genji is the son of an emperor and one of the emperor's lesser wives, and the book is simply the tale of his romantic experiences. From a Western perspective, it does not have a hair-raising plot: Japanese art forms tend to be more subdued than their Western counterparts, and likewise Japanese stage plays seem almost plotless to someone accustomed to the work of William Shakespeare or other European writers.

Yet the Tale of Genji is filled with an enormous sense of the deeper meaning in life, and raises questions concerning what is permanent and what is only a part of the passing moment. Though it is a seemingly lighthearted tale of a handsome young man's adventures in love, its bubbly surface conceals much deeper anxieties that plague Genji—anxieties that grow as the story moves toward its conclusion.

A thousand years after Murasaki, writers considered themselves clever if they managed to work in some reference to themselves in a story. (For instance, the twentieth-century British humorist P. G. Wodehouse had a character in a story suggest that the only writers worth reading were Leo Tolstoy, author of War and Peace, and P. G. Wodehouse.) Readers delighted in such instances of self-reference, just as movie fans have studied the films of Alfred Hitchcock for the director's trademark appearances as a background figure—a man passing by on the street, for instance—in his own films.

In fact this use of self-reference is an old technique, perhaps first pioneered in Murasaki's use of the character "Murasaki" in the Tale of Genji. Murasaki is a comforting presence, a gentle and sensitive figure who offers peace to thePage 270  |  Top of Article restless Genji. Perhaps this was a revelation of Murasaki's inner self; certainly her diary and autobiographical writings, composed after she joined the imperial court in 1005 as a companion to the emperor's young wife, reveal little about her real feelings.

In the Japanese culture of the Middle Ages, it was considered inappropriate for anyone to share their innermost thoughts with others, and this was doubly so for a woman of the upper classes. But Murasaki seems to have been even more reserved than most, because in her diary she remarked that other women of the palace resented her distant manner. She confessed through words delivered from Genji's mouth that she wrote because she "was moved by things, both good and bad," and wanted to "make [them] known to other people—even to those of later generations."

Little is known about who Murasaki was in life, and still less is known about how her life ended. It is possible that she left the court to become a Buddhist nun, and spent her final years in quiet contemplation. Some records indicate that she died in her thirties, others in her late forties. She is believed to be buried in Kyoto, but historians are unsure of her grave site's exact location.